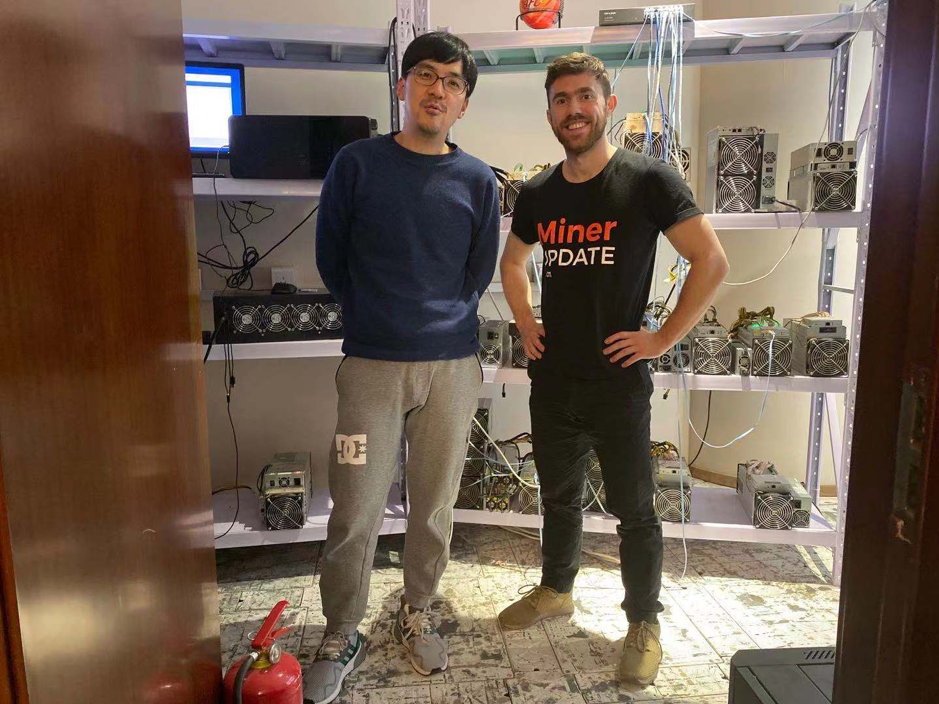 MINING IN CHINA VERSUS OVERSEAS, BITCOIN VERSUS BITCOIN CASH, AND THE MINING POOL BATTLE FOR DOMINANCE

This is a contributing article from MinerUpdate, a crypto mining publication.

Poolin surpassed BTC.com in the Bitcoin mining pool rankings this year and has largely maintained their first place position since. We talked with Chris about what Poolin did to accomplish their dominant position and how they plan to expand their business moving into 2020.

Chris detailed the suite of features offered by Poolin and what advantages their customers by choosing Poolin. We also covered a number of interesting topics not specifically related to Poolin in the interview which include:

Poolin is now number one in the Bitcoin mining pool rankings. Congratulations. What did Poolin do during the year to achieve this?

We invested in people to improve our product experience. We figured out a way to make our clients feel better.

For example, we have the 7-11 plan where our customer support can always be found on WeChat between the hours of 7 am to 11 pm. Other pools are still lagging behind when it comes to user experience. The most important thing is how our users feel.

Editor’s note: We also talked with the NovaBlock team about Poolin’s rise to number one in the Bitcoin mining pool rankings as NovaBlock has also researched this question. NovaBlock co-CEO Yuki Sun proposed that Poolin’s Chinese meetup tour significantly boosted brand awareness with Chinese miners while Poolin’s mobile application also resonates strongly with the mining market in China. From MinerUpdate’s experience, Chinese consumers are extremely mobile-focused, significantly more so than Western consumers. Poolin’s mobile app is extremely well-designed and provides versatile and valuable functionality to users. Poolin also benefitted from the app appearing on Chinese state-owned television channel CCTV when an individual being interviewed was using the Poolin application.

What are the specific benefits for miners using Poolin’s technology as opposed to the technology of another mining pool?

Greater efficiency and lower risks. Operating a mining pool is a high-risk business. If there is a bug in the code of a mining pool, in most cases, the miner won’t know and the mining pool operator won’t be aware.

The bug could cause loss of hash rate, a higher incidence of orphan blocks, as well as other risks. The mining pool may believe that miners are executing block withholding attacks. Poolin’s team of developers is extremely familiar with mining pool technology so such risk is minimized.

Poolin has also been expanding internationally. You have opened a Berlin office and hired Alejandro De La Torre. What are Poolin’s plans outside of China?

We have recently completed a European tour and we plan to do a North American tour. The Poolin team loves to meet miners, whether it be online or offline. We always want to talk to miners face to face. We are essentially going to duplicate our Chinese marketing strategy to overseas.

In China, one-on-one sales jobs are efficient because there is a lot of hash power in every city. Chinese miners have their own circles and it is important to be active in these circles. Roundtable discussions are regularly held. It’s certainly different than the Western mining market.

Are there any other business lines Poolin is considering?

What would be the specific value-add for a miner to have Poolin manage their mining farm as opposed to managing their own farm?

Poolin has valuable resources in terms of clients. Mining farms regularly ask me to help them find miners for hosting and I always help.

Roughly 70% to 80% of mining farms in China provide hosting services. The most important benefit is helping these mining farms fill their operations with mining rigs from the first day.

It can be expected next year.

The logic of Smart Agent is to compress data reducing the bandwidth required. Mining in China is not like mining in developed countries.

From speaking with miners who are operating in mountainous regions or regions with bad internet connection, do you find that this is a major issue?

Once this happens, there is no cable internet. There is only 4G and 3G. In this case, proxies must be used. I believe circumstances have improved over the past two years.

But before two years ago, there were several mining farms in the Sichuan mountains that had roughly 1 Mbps bandwidth. This is very low. If you have more than one hundred mining rigs, this bandwidth is not enough.

Poolin recently announced the Auto Switch feature where miners can automatically switch between mining Bitcoin cash and Bitcoin based on which is more profitable to mine at any given time. Do you see any risks to Poolin with some losses occurring between the changeover?

There will be no loss. When the mining rigs switch, no mining shares will be wasted. We will not be switching the mining rigs to a new Stratum server. The mining rig will simply transition to mining on a different network. The only loss that can occur is when we sell BCH for BTC but no losses will be incurred to the miner using the Auto Switch feature. The feature will only add extra profitability.

At the moment, miners mining Bitcoin Cash using our Auto Switch feature will be doing so anonymously. Some of this unknown hash rate is attributable to Poolin. There are many other mining pools offering a feature similar to our Auto Switch feature and some of the unknown hash rate is likely attributable to them. For example, BTC.top offer such a feature.

Currently, there is over 20 PH/s mining on Bitcoin with an unknown source. When this hash power switches to Bitcoin Cash, most of it will remain unknown so this likely counts as another source. I believe what has happened is okay for the Bitcoin Cash blockchain. No harm has been done.

This is a bad translation. There is a Bitcoin Cash supporter Chang who stated in an interview that the anonymous hash power is from Poolin and that Poolin will harm the Bitcoin Cash network.

Chang said we don’t support BCH and I said we do support. We support BTC, BCH, and BSV. We support all the cryptocurrency networks that we provide mining pool services for.

There is a concern that Poolin will harm the Bitcon Cash blockchain but Poolin have already announced that we will not do a 51% attack on any blockchain.

There are many BCH supporters that believe Poolin is their enemy. They think that Poolin will harm the Bitcoin Cash blockchain so we needed to announce that we will never harm BCH.

Sometimes, I say that Bitcoin Cash is not as good as Bitcoin. I can suggest this and some BCH supports will think I am doing an attack on BCH.

But I am just saying what I believe. If you don’t believe this, you can just as easily state BCH is better than BTC.

How has your experience with the BCH community been?

I believe the BCH community in China are too anxious. Western BCH supporters seem not as nervous.

In China, many BCH supporters fear that BCH is dead. I think this is ridiculous and I believe it is even more ridiculous when they fear that Poolin is harming BCH.

We just switched some hash power to mine on the BCH blockchain. How can we harm this blockchain by mining on it?

What do you think about the long-term prospects for Bitcoin Cash?

I can’t comment on how the network will perform in the long-term as I know nothing about the BCH development community. But in terms of price, I believe BCH will continue lower and lower in terms of its BTC value. It’s a one-way trip.

Moving into 2020, how do you think the upcoming halving will impact the Bitcoin mining environment?

I believe nothing will happen initially. In the few days after the halving, I believe many old mining rigs will shut down and after that, I speculate Bitcoin price will go up. Bitcoin price comes is not from cost. It comes from demand. But many people don’t believe this.

My personal opinion is the halving fundamentally does not affect the price of bitcoin. But everybody thinks the event will make bitcoin price go up. So the price must go up.

In 2019, we have seen a lot of places around the world become popular for bitcoin mining. There has been a lot of news about Iran, Russia, Canada, and Kazakhstan. In 2020, Do you believe we will see hash rate move out of China or do you believe China’s hash rate dominance will remain around the same?

There are two angles. When we mention mainland China, the hash rate dominance will definitely be lower. And it will continue to go lower and lower. Because many Chinese miners are moving their mining rigs overseas.

The other angle is Chinese miners are becoming increasingly global. The mining industry is not like any other industry in China. Chinese mining has nothing to do with the national government.

My understanding of mining in China is that it often depends on developing relationships with local governments. Is this accurate?

This is correct but it’s not a very strong connection. At the moment, I believe the relationship between miners and local governments is very poor. It is not like other traditional industries

Once there are local government policies, local government will abandon these miners. Miners know this. In response, they always move around. They used to move around between Chinese provinces. Now, they are moving around between countries. They are moving between Russia, the Middle East, Iran, and China. Miners are only loyal to their interest. They will never be loyal to any government.

And the NDRC recently removed Bitcoin mining from the list of industries it plans to eliminate. That would seem like a positive development for mining in China.

It’s similar to an endorsement from the government. Xi Jinping also made a public endorsement of the blockchain industry. After that, crypto mining was removed from the list of industries to eliminate.

What do you think of China’s plan to launch their own central bank digital currency?

They have been developing the digital currency electric payment project (DCEP). The technology is similar to a subway card. This technology is widely used in public transportation. DCEP is like an advanced subway card.

One function which was mentioned was double offline payments. This means the payer and the receiver can both be offline and they can make a payment.

The central bank mentioned that DCEP might one day be built on blockchain technology. I believe there will be a DCEP blockchain because there is a strong motive for the Chinese government to launch this is to promote RMB in other countries. They want the RMB to have the same situation as the USD. If you want to achieve this, DCEP must be a blockchain.

Would you foresee the RMB overtaking the USD as the world reserve currency?

I would not suggest this. But there are many countries which are more friendly with China than the US. People in these countries prefer RMB to USD. And many even prefer RMB than their own fiat currency.

Thanks to Poolin for hosting MinerUpdate in their office and taking the time to do this interview. We will be staying in touch with the team to keep our readers informed about how their business evolves in 2020.