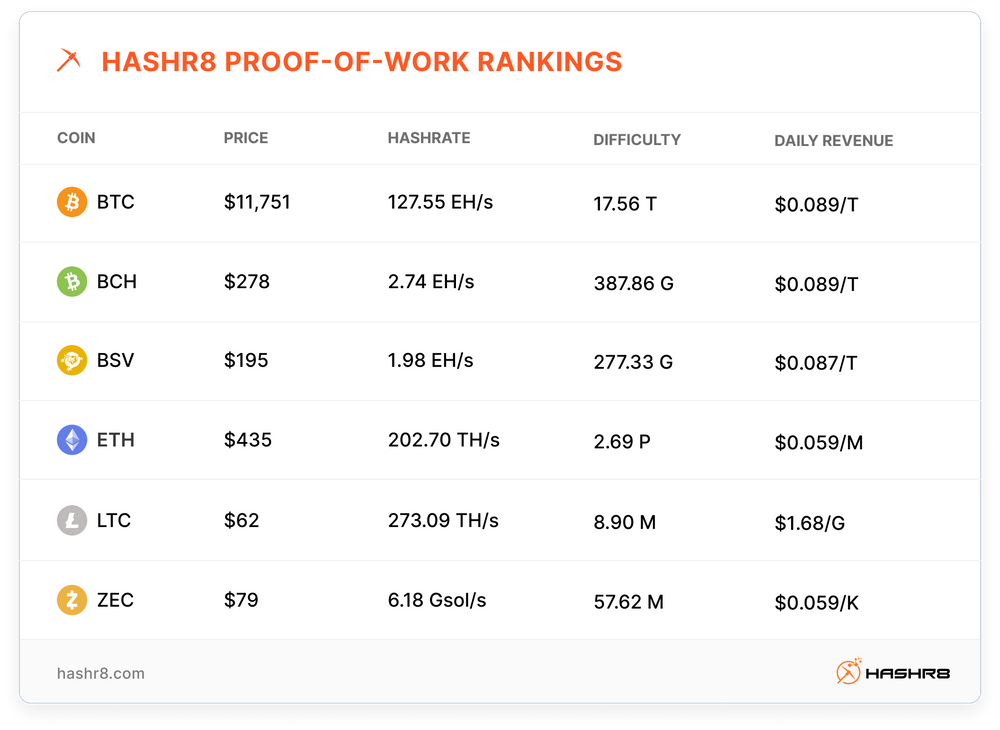 This is a contributing article from HASHR8, a modern media and Mining company focused on driving the mass adoption of cryptocurrency.

Innosilicon has launched a new Ethereum miner – the A10 Pro. It has a computing speed of 500 MH/s and consumes 860 watts. It’s already shipping by resellers out of Shenzhen.

StrongU has launched a series of new SHA256 miners – the Hornbill H8 and H8 Pro. They have a computing speed of 74 TH/s and 84 TH/s respectively, with a power consumption of 3,300 watts and 3,600 watts. It’s expected to start shipping between the end of October and mid-November.

MicroBT, Bitmain and Canaan have sold a significant amount of their new-gen SHA 256 ASIC stock. There are still machines available from resellers in Shenzhen, including S19 Pro, S19, M31S+, M31S and M32 machines.

As reported by Wolfie Zhao of Coindesk, more than 20 Bitcoin mining farms in Inner Mongolia, China have been stripped of electricity perks after a clampdown by the local government.

The list issued by the local government includes subsidiaries of mining manufacturers Bitmain and Ebang.

It’s unlikely that this will have a huge impact in the short term for miners in China. Inner Mongolia has always been unpredictable from the regulation front, and there is a much greater number of large mining farms operating in Sichuan and Xinjiang.  – Thomas

Mining in Sichuan continues to be unpredictable. Sichuan is a region prone to natural disasters, and almost every year there is flooding or earthquakes that impact the region.

During August there were a number of outages caused by rain and flooding. Cheaper electricity (~0.23 RMB/kWh) during hydro season is always offset by the uncertainty of uptime.

Bixin has launched a new Bitcoin mining pool named Kele pool. It can be found through the Bixin Wallet. It currently has around 850 PH/s on the pool. This is not the first foray by Bixin in the mining pool industry, as they operated a mining pool from 2016 to 2019.

There have been some movements by publicly traded companies in the USA.

Marathon has also signed a long-term purchase agreement with Bitmain to receive 10,500 S19 Pro miners between January 2021 and June 2021. This would increase their hashrate by 1,155 PH/s and take them to approximately 1,441 PH/s in total.

Digital Currency Group (DCG) announced that they have formed a subsidiary named Foundry to provide mining and staking services in the North American market. DCG said it has committed $100 million to invest into Foundry in 2021. Foundry have some big-hitters, with Mike Colyer (ex-Core Scientific) and Kevin Zhang (ex-Bitcoin.com and Greenidge Generation) leading up their mining efforts.

DMG Blockchain announced its Mine Manager Enterprise Software and Bitcoin Mining Pool. As per their recent press release, the goal of DMG’s upcoming pool is “to provide a publicly audited pool, which is truly based in North America and provides reporting that meets today’s compliance needs required by independent third parties and companies seeking a high level of governance and compliance.”

🌏 Mining around the Globe

Something peculiar happened during the week, as BTC.com suddenly added 7 EH/s of hashrate. Although it was suggested that this may be related to Bitmain having large sales of the S19 Pro recently, this was not the case.

The abnormal jump was caused by Minebest/Mining City directing hashrate from BTCV to BTC for a period of time.

Enegix announced their monster 180 MW facility in Ekibastuz, Kazakhstan is ready to launch in September, 2020. This is their third facility in Kazakhstan and Enegix is currently looking for hosting clients, and it can hold around 50,000 new-gen machines.

0 comments on “China Regulations and US Expansion – A look into the global Bitcoin mining industry over the past seven days, from China to the USA, to Europe, and more”