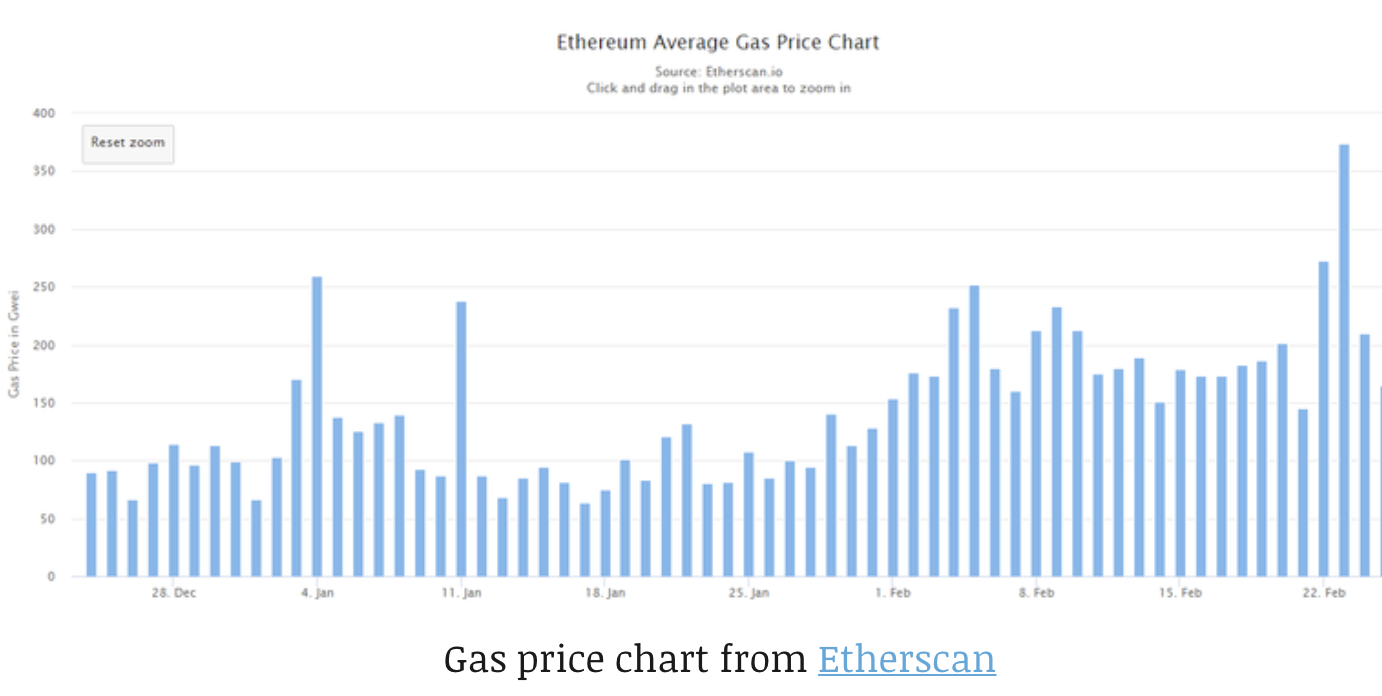 Before we talk about EIP1559, let’s take a brief look at one of the biggest issues plaguing Ethereum – it’s fee market.

Transactions on Ethereum are processed auction-style where highest bidders are considered first for inclusion in a block, and each block only has limited space available. During times of high activity (eg. DeFi summer 2020, market dumps), gas prices have spiked to over 1000 – 2000 gwei and even . At these gas prices, even a simple swap on Uniswap could cost anywhere between $150 – $400 while other more complex operations can cost double or more of that.

Throughout 2021, Ethereum’s gas prices have been rising steadily and averages around 150+ gwei in recent weeks, driven by a surge in contract interactions on the Ethereum network.

Under these conditions, unaware users are likely stuck waiting until they speed their transactions up with a higher fee to have their transaction picked up. Waiting for the gas prices to retuirn to lower levels could take hours, days, or even months.

Compounding on the issue would be the fact that each wallet (eg. Metamask) has its own method of estimating the market rate for block inclusion, leading to everyone bidding on top of one another, eventually leading to overpaying of gas fees.

One of the Ethereum Improvement Proposals (EIP), EIP1559 proposed in 2019 is now the focus for much of the Ethereum community as attempts are made to remove this bottleneck.

In today’s article, we’ll be taking a quick run through EIP1559 and the pros/cons that come along with it.

1. Introduction of BASEFEE, which is the portion of transaction fee that gets burned.

BASEFEE is intended as the “Market rate” for transaction inclusion. In each transaction, users can add tips on top of BASEFEE to incentivize miners to pick up their transaction first.

Idea is to relax the constraint where each block must be 12.5M gas in size, and instead allow it to float between 0 – 25M gas in size while targeting an average of 12.5M gas in size. Blocks shrink/expand according to network demand which is then used to adjust BASEFEE.

A large proportion of the ETH community appears to support EIP1559 while the majority of miners are against it. @harithk17 from @etherscan also shared an insightful dashboard that helps give an idea on the hash rates supporting or opposing EIP1559.

As a hobbyist Ethereum miner as well as a user myself, I personally think that the implementation of EIP1559 is worth a shot – Ethereum at its current state prices out many users and developers.

The biggest benefit that EIP1559 will bring about will be a potentially lower fee market & better user experience, both of which benefit users and developers who are around to spend. In the longer run, it would benefit miners as on-chain activity remains high and their revenue stabilizes rather than spike up/down during peak times.

One universal risk will be deployment risks – from the process of updating the entire Ethereum blockchain down to dapp updates.

However, these risks could be well worth taking on to ensure continuous and sustainable economic activity of the Ethereum ecosystem that is the decentralized financial system for us all.

Special thanks to @hasufl for sharing a few pointers and perspectives. I have since amended some points in this article to better reflect certain points of consideration post-discussion.

This article was originally posted on CoinGecko Buzz.