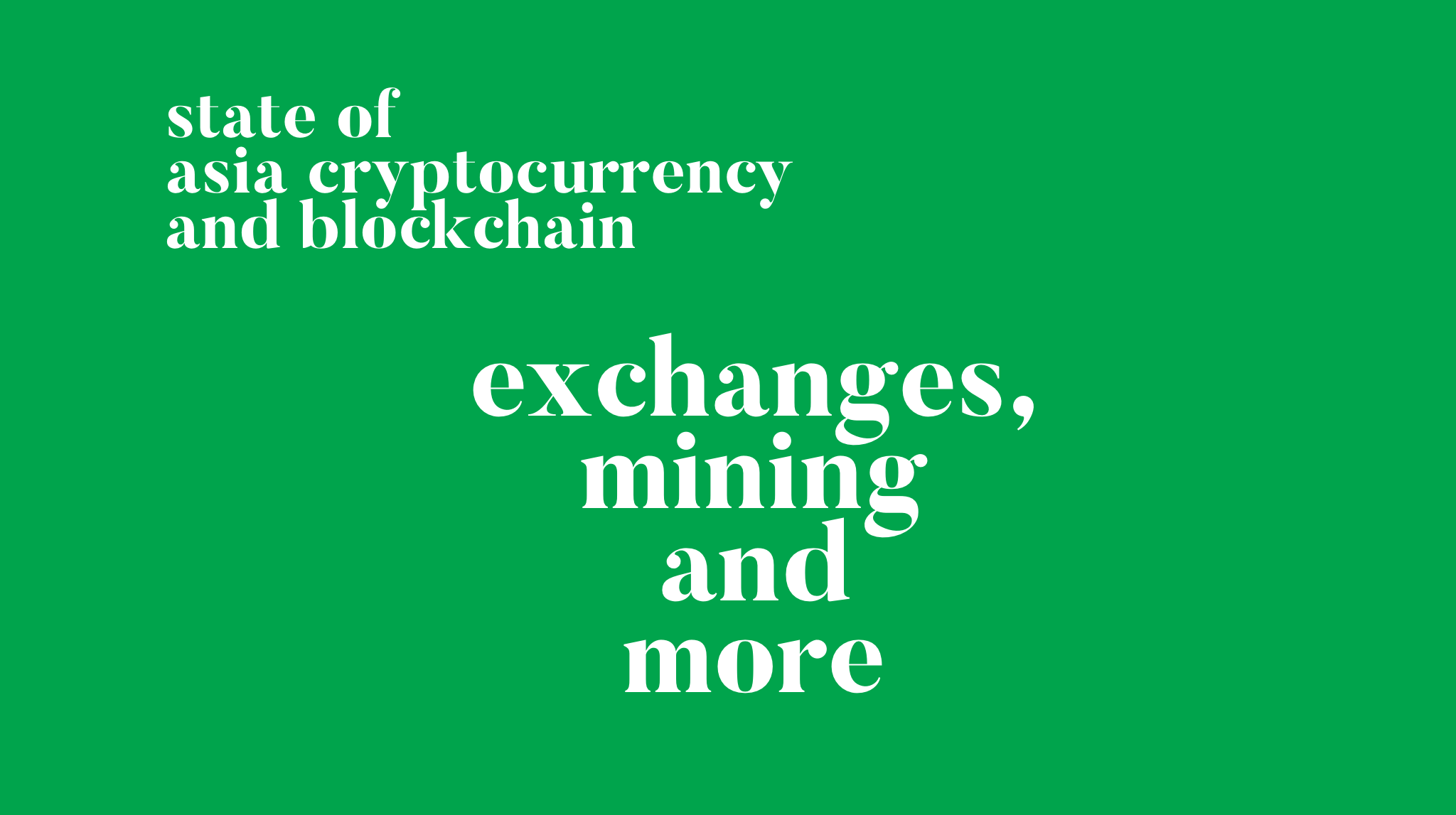 As you may have read in the last few weeks, we are rolling out a new post series for our Premium readers. It will feature recurring updates on the state of Asia Cryptocurrency and Blockchain. We have come up with 4 high-level topics, and every week we will be writing about one of these topics, and rotating through them in the following order.

Check out our previous pieces on China, Japan, Korea, Singapore, etc. This week, we are discussing Exchanges, specifically the Asian exchanges – , OKEx, Huobi along with those that made headlines in Korea and Japan in the recent months.

So many things have happened in the exchange world this past month. Since this is the first of our first monthly series on the topic, we are providing a deep-dive into Exchanges and will do another one on Mining in the next monthly series.

This is part 2 of 2 of the series this week–we discussed Binance in part 1 of 2.  In this second post of this week’s series, we’ll be discussing OKEx and Huobi and the exchanges in Korea and Japan.

OKEx and Huobi’s recent housecleaning, and their US and international strategies

Despite being ranked the top 3 exchanges by volume, , OKEx, and Huobi seem to have very different strategies and are approaching the exchange space from alternate angles. While  is doubling down in Singapore, OKEx looks to focus more on the US market, and Huobi in Asia.

has been doing some housecleaning. It has delisted a second swathe of trading pairs due to “weak liquidity”, removing a further 49 trading pairs from its order book.

The company has also made progress in geographical expansion and product front. It has expanded in several regions in the last month including the Latin American market, with a trading platform that’s set to let users trade top cryptocurrencies against local fiat currencies. It has also built out a presence in Europe although have yet been given the green light to trade fiat. On the product front, the company announced a brand-new derivative product, Perpetual Swap, a peer-to-peer, virtual derivative developed by OKEx to enable traders to speculate the direction of the price of digital assets such as Bitcoin. OKEx’s new Piggybank product also enables customers to lend their fund as margin loans to margin traders.

Meanwhile, the company also had to deal with an ongoing PR crisis. the firm was forced to push back against allegations made by Hong-Kong based trading firm Amber AI over its early settlement of bitcoin cash futures contracts last week, right before the BCH hard fork.

As for Huobi, the exchange has also built  their presence around the world albeit with some operational hiccups along the way. For one, it has recently dismissed 60% of its workforce in Brazil, a country it entered a few months ago. Additionally, it has opened an office in Moscow, the first major crypto trading platform to have a physical presence in the country, notably with a Russian-language call center.  In addition to the call center, this site provides back office support for OTC trading and listing, and personal managers for big clients.

Despite such success, Huobi wasn’t able to get permission to setup fiat to crypto operation in Russia, similar to its US office. According to Coindesk,

“They consulted with us a lot, and in the end, I think, we made them feel disappointed,” Vladimir Demin, head of the Center of Digital Transformations at the Russian government-owned development bank Vnesheconombank (VEB), told CoinDesk. “They were interested in providing fiat operations, but we told them it’s impossible.”

In the meanwhile, the company created a new committee to work with China’s communist party, asserting that “it was necessary to implement” Communist Party principles and policies into private companies and maintain its foothold in China.”

Despite being a relatively new entrant and underdog,  has outperformed the other 2 exchanges from an execution and branding perspective. OKEx has been constantly battling with image and operational issues such its trade execution hiccups, lack of transparency, and some even say integrity, at least from the surface. In both Chinese and US press, it’s frequently read that OKEx customers would bombard their China and Hong Kong offices and demand a response to their money loss or an exchange issue that they’ve had experienced.

Recently CEO Star Xu was reportedly being questioned at the Chinese police station, which was then resolved when Star and team cleared himself.  As for the Amber AI allegations, Amber AI is a well-funded quant fund based in China with a number of US crypto funds as LPs and has been one of the best performing quant funds this year. As such, allegations from the team there do not look great for OKEx.

Star Xu is also a highly controversial character. From people close to Star, they have described him as “not a visionary”, but someone with “unique and strong vision of his own”, and one with “steadfast mentality”. He is connected to the government and follows the rules, but I don’t think the scrutiny and the rumors are made without reason.

After following  into Malta, OKEx has now approached a different strategy. The company has now built out a presence in the US, Europe (in late November but quietly because they didn’t have banking relationship in Europe), and Philipines as one of the new Asia markets.  What they have able to accomplish is introducing fiat trading in their exchanges.  In the US, the company is modeling after Coinbase pro, and they expect large institutions coming into the space as customers in the next year.

Unlike OKEx, Huobi is repositioning its strategy with an increasing focus on Asia. Forming a Communist government committee is not something outlandish. The Chinese government has been increasingly getting more involved in Chinese internet tech companies and wanting to work with them more closely as an increasing effort to centralize data and information. And it’s actually reported that “more Chinese technology companies have set up Community Party of China (CPC) branches lately, reflecting the importance of improving political positioning in the internet sector.” See more of what China and the internet companies are doing, and its relevance to Blockchain in my write up in China here.

Since the beginning of the year, Huobi has expanded into the US by hiring a head there and building out a team.  Nevertheless, they haven’t been able to gather license to operate with a fiat to crypto model in the US. Whatever Huobi cannot compete on the  front, it is competing on the monetary and marketing front.  Since then, the team has even launched the first exchange billboard campaign in San Francisco.

Between OKEx and Huobi, you can simply get an idea from the profile of the US head that they’ve hired to understand where their market positioning is. Frank Fu, head of Huobi US, was an international head of corp dev for one of China’s large tech companies, but his experience was limited to cross-border roles in software and consumer tech companies in Silicon Valley and Asia. OKEx US, on the other hand, is currently headed by Tim Byun, formerly serving 9 years at the Federal Reserve of San Francisco and then was Chief Risk Officer in a number of crypto-related companies since 2014.

See our post on Japan exchanges in the State of Crypto and Blockchain report on Japan here: