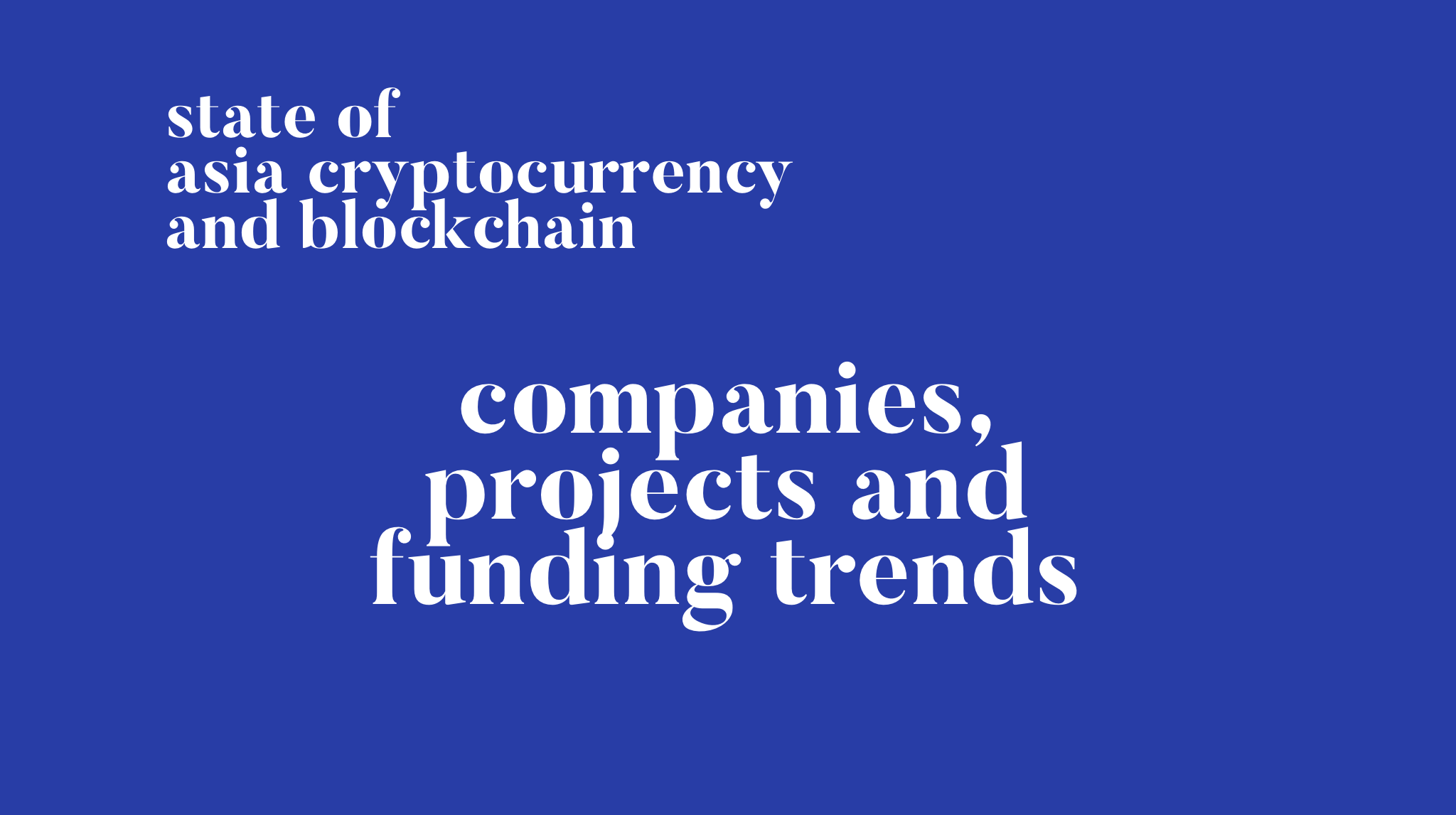 2 weeks ago, we shared our thoughts on the recent important happenings in Japan, Korea Thailand. This week, we share what we are seeing in the Asia Crypto funds and investments space.

Investments from Asia crypto funds have mostly stopped this year, and the Asia markets overall will be relatively quiet going into February as many Asian countries and celebrate Lunar New Year, with the celebration lasting up to 3 to 4 weeks. We are seeing a re-centralization of crypto in Silicon Valley, but such trends of crypto accumulation do not equal to crypto adoption. We then share the crypto-related deals that have happened in Asia this year.

Investments from Asia crypto funds have mostly stopped this year, and the Asia markets overall will be relatively quiet going into February as many Asian countries and celebrate Lunar New Year, with the celebration lasting up to 3 to 4 weeks. Check out our writeup on the impact of Lunar New Year’s on the crypto and general markets in Asia. Many Chinese crypto funds have decided to sit on the sidelines after suffering through huge losses last year. A few are also re-evaluating tokens of high profile projects’ that are supposed to launch this year, and deciding whether to sell their existing holdings in OTC or secondary markets.

Starting from Q4 last year, Asia funds no longer saw the same kind of the deal flow as before, as the aura of cheap money and the Asia retail market no longer appeal to projects as it did in early 2018. This is also partially driven by the quality of the remaining projects that were looking to raise at the end of last year, as these projects are no longer just looking to shill their tokens to a predominantly speculative market.

It should also be recognized that the Asian fund investors have become relatively quiet as most of them have less appetite for long term risk than Silicon Valley investors. Many capital allocators from Asia invest their own capital, not that of LPs. Subsequently, people in Asia mostly choose to go into the business only if they know with high certainty that they are going to make money in a short time period. So at this point, many are sitting on the sidelines but they are still watching. They are attending the same events in Silicon Valley as you and I, and are bracing for the next bull market.

Simultaneously, many of these Asia funds are diversifying their businesses and pursuing alternative strategies, including quantitative trading, staking and advisory services. Some people are even returning back to finance. It is rumored that the large global crypto fund NEO global is exploring alternative income streams such as staking and mining.

In Korea, it’s equally quiet. The large venture funds in Korea no longer see deal flow. As a retail market, Korea now has very little traction to western projects. A number of funds are now migrating over and prospecting new deals in the states, as I mentioned in my tweet in the last week. Nevertheless, I was in Seoul Korea last week for the Tezos Korea conference, the packed large room and the engagements of the technical community was certainly impressive. You can check out the whole video here. We are in certainly in an interesting market right now.

Akin to what investor Avichal Garg from Electric Capital tweeted, it appears that fundraising and overall crypto sentiment has indeed gradually returned and centered back to Silicon Valley-based crypto funds and traditional investors.

I agree that re-centralization is indeed happening at the moment as talent and capital gravitate towards Silicon Valley, but I also note David’s point that founding people of crypto are nomadic, in the case of Vitalik, and Satoshi, whose presence is digital and distributed.

I believe re-centralization and decentralization of these crypto communities come in waves. The bear market inherently drives out those who are purely in the industry for short term financial gains, and naturally leave those who remain optimistic about the industry long term. In the next wave, which will likely take some time to realize, we will see communities around the world actually contributing more than just their wallets, and instead building and coding alongside companies in Silicon Valley (SV). The crypto communities in Asia has developed to a point where core groups of communities have already been solidified in a number of countries, and should the market rebounds, the marginally- involved individual and talents that were watching from the sidelines will return back to the industry quickly and resurface. I don’t think we should underestimate the speed at which these individuals can gather talent and capital, and execute on ideas at lightning fast speed.

And despite SV having the most concentrated group of talent and the most reliable capital, I still don’t believe large mass adoption of crypto will happen there. There may be a mass accumulation of crypto holdings, as we see a surge of custody solutions arising, but not adoption. While the overall industry has clearly narrated a need for bitcoin or an alternative but reliable digital currency in third world countries, most people still choose to focus on building for the 1%. They’d rather focus on more fancy and sophisticated versions of blockchains to achieve technological breakthroughs and fulfill their own curiosities.

So for protocols that are still trying to find potential adoption and use cases, the most strategic thing to do is to raise a lot of money and start building a distributed team, or model after the crypto foundation, that inherently fosters distributed communities. Should once crypto-market-fit arises, scaling adoption can become much faster with a local community. We are seeing this kind of “discovery” of crypto-market-fit outside of the US already among private and public companies, i.e. Whatsapp’s stablecoin in Southeast Asia, and EOs in China. The capital is necessary as these communities take some time to build and will come especially handy in bear markets.

Year to date, the largest announcements in investments thus far came from companies that have raised in 2018, such as Anchorage, a custody solution, that raised $17mn, which actually happened earlier last year.

The 2nd largest was BRD’s investment, a mobile cryptocurrency wallet BRD that raised a $15 million in Series B funding, led by Japan’s SBI crypto holdings, formerly a subsidiary of SoftBank. Per the CEO of BRD, “SBI Group’s investment in BRD allows us to firmly cement ourselves in the Asian market”. The team is looking to use the capital and relationship to expand into Japan and across Asia.

I highlighted some of the deals and fund announcements that have been happening in China and rest of Asia below. Thus far the volume has been extremely light, most of which are deals that have been in the work for sometime, and many of them are traditional venture investments and corporate investments who are looking and getting involved into blockchain instead of pure crypto funds. Equity fundraising has become predominant again since late last year. Companies like Lightning Labs, Abra and Figure are raising series B and equity rounds.

This is the largest fund family raised by LCP to date and brings committed capital under management to $1.5 billion. In case you are wondering why such a large focus on China, well, the opportunity is huge. In The Information article on “How Sequoia’s Neil Shen Built a China Powerhouse”, the article mentioned that “Sequoia in the past year invested in more new deals in China annually than it did in the U.S., and the best returns in China rival those in the U.S., according to people familiar with the matter. For example, Sequoia’s gains from Meituan Dianping’s initial public offering in September would be on par with its gains from Google’s 2004 IPO, according to people familiar with the VC firm’s internal data.”

Go-Jek has acquired a stake in Coin.ph, a blockchain-enabled mobile wallet from the Philippines. http://bit.ly/2FNAfPQ

Go-Jek, in case you haven’t heard of before, specializes in ride-hailing and logistics. It is the Southeast Asia version of Uber, plus more. The company has raised over $3bn dollars from Tencent and Google with the latest public announced valuation of $5bn, and has been on a rip in Indonesia and neighboring countries. In Indonesia, it’s processed more than 100 million transactions for it’s 20–25 million monthly users. This acquisition of Coin.Ph move into Philipines and crypto should not be dismissed.

The co-founder of Ceyuan Ventures is Bo Feng, who also happens to be the co-founder of Capital. Bo Feng has deep connections in Chinese media and this deal is certainly an outlier to what we are seeing in the industry right now.

SBI, along with a number of large Japanese and Korean finance a tech conglomerate, continues to be very active in crypto. Nevertheless, these teams generally move very slowly and are difficult to navigate for an outsider.

Online education startup Eruditus has raised $40 million in a Series C round of funding led by Sequoia India to offer additional educational materials in blockchain and AI. http://bit.ly/2RkwDMq