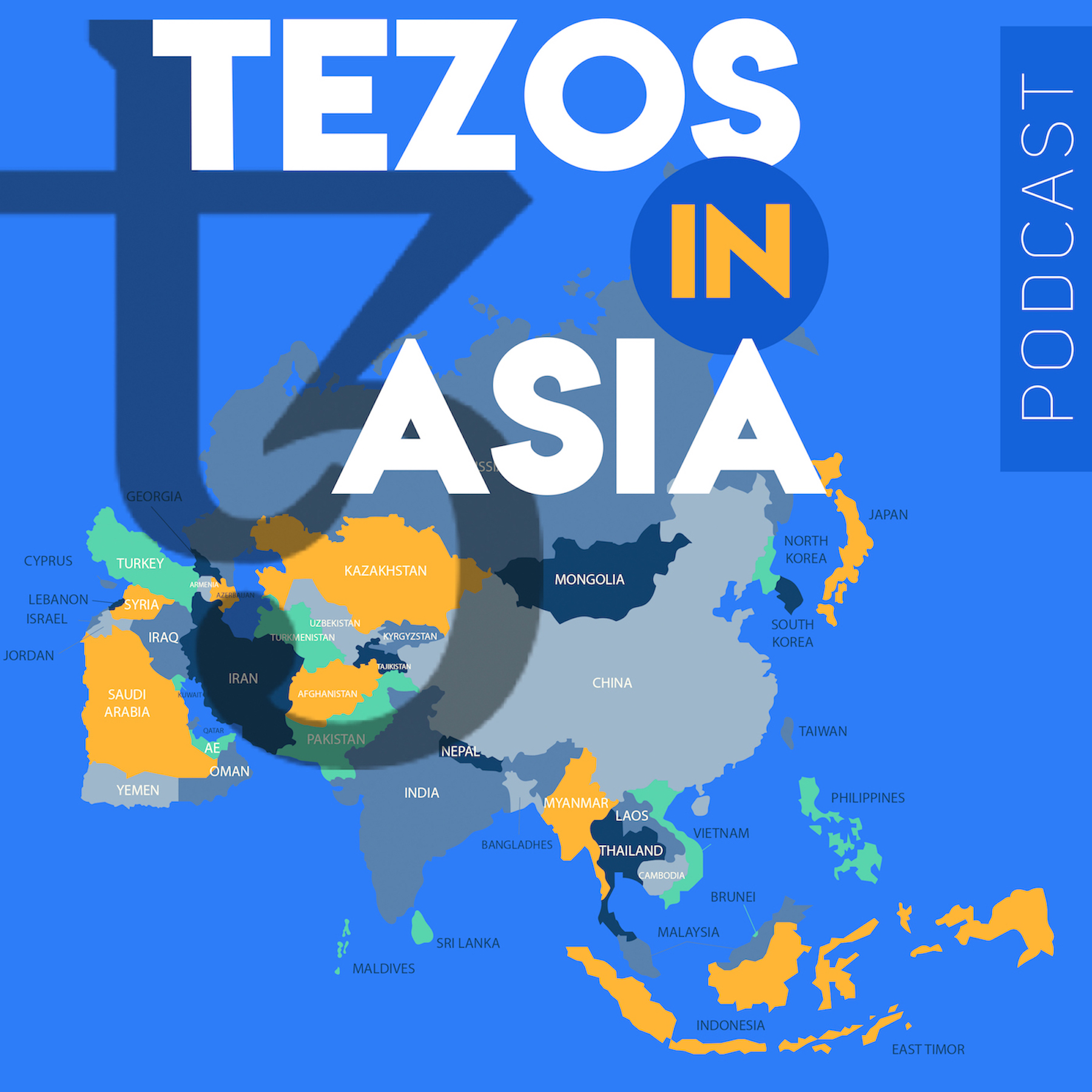 We recently interviewed Arthur Breitman Diego Olivier Fernandez Pons on Tezos Communities. Below is the transcript:

This is our newly released podcast in partnership with Tezos.

Welcome to Tezos in Asia, a series featuring and showcasing the growing Tezos communities in Asia. I’m your host, Joyce Yang, founder of Global Coin Research. follow me in my journey in exploring and meeting the various Tezos communities in Korea, Japan, Southeast Asia, China and more. Learn about the crypto happenings in each of these countries, the cultural backdrop and regulatory frameworks, and what these communities are doing locally.

In this very first episode, I’m in Seoul, Korea, attending a Tezos Korea conference, and learning about the background and the history of these Tezos communities from two involved members. I speak to Arthur Breitman, founder of Tezos, and Diego Olivier Fernandez Pons, a former Tezos foundation board member and currently the scientific advisor of Tezos Southeast Asia.

In this first conversation, I speak with Arthur about the importance of a having global presence for Tezos and I ask him for some of his thoughts on the communities. But before that, we had Arthur just give a quick introduction of himself as well as Tezos and the community.

My name is Arthur, and my background, I studied math and physics. I worked in finance for a long time. I was aquant, working in high-frequency trading, I then worked a little bit in robotics, I was working at Waymo, which is Google’s self-driving car, or Alphabet I should say, self-driving cars division. So that was a nice change before really just jumping full time on Tezos.

On the project itself, so Tezos is a cryptocurrency, and it’s a smart contract platform. Originally, the problem it really tries to address is a question of governance in cryptocurrencies, and sometimes people will say like oh, it adds governance, but it doesn’t add governance. Every project has governance. It can be explicit, but it’s always there. There’s always a form of governance.

And the idea was, instead of trying to have rough consensus and implicit governance, which I think can devolve into handing out a lot of power to a few people, the idea was to have explicit governance starting with a simple mechanism on-chain based voting, and then progressively improving the governance and improving the methods by which the protocol evolves. And that’s I think you can strike a good balance between being agile and being able to evolve and make changes and between having security and stability. So that was originally embedded in this project

And how do you see these communities evolve?

By their nature, blockchains are pretty global, I think that’s what makes them interesting is that they’re borderless, and that’s valuable. However, I think that from a human perspective, we’re still local creatures. We interact with people around us in our local communities. And so I would say that having this local chapters of the projects, local places where people can meet and discuss, I think is very important in order to foster adoption, education, and understanding of the of the project.

And as a reminder for our listeners. We are here in Seoul, Korea for the Tezos conference organized by Tezos Korea.

Yeah, we’re here in Korea and the event has a great turnout and great energy, and people are asking questions about very technical things that you’re speaking about.

What do you think of the communities here?

I’ve had so far two trips to Korea and two trips to Japan so I’m speaking from limited experience, but everyone I’ve met has been great and I really enjoyed the communities that I’ve met and the members that I’ve met in those places. And what I like is the self-organization has been really like they are now foundations in many different countries in Asia and that’s really exciting. Like taking the matters into their own hands and moving things forward, so I think that’s pretty impressive to see.

What’s your general observation of the Korean community versus the rest of the communities that you have seen and visited?

What I noticed is that the materials which have been produced by the Tezos Korea community have been very high-quality. I think the events are always very well organized. The infographics that came out of Korea have also been superb.

So I also see that something, which is new now that wasn’t there last time was [them] trying to have more partnerships with universities, for research. So it’s a burgeoning ecosystem.

What’s your vision for these communities?

I mean, what matters is their vision, not my vision, But…

At the end of the day, you know one thing I really like is meetups. When I moved to New York, about 14 years ago, I didn’t know many people and I went to these meetups and what I found great about meetups is that you could find meetups on any topic you wanted. And that was really cool and for example, you could go to a machine learning meetup or you go to a science meetup and I created one myself. I had like a libertarian meetup for example.

Yeah. And do you see the Asian communities making up a large percentage of the participants of these communities?

I mean that’s a large percentage of the world, so yes.

Yes, that’s great. I think that’s a very much untapped market. A lot of projects haven’t been really pay attention to, or think about in a way that you guys have been thinking about it.

I get the sense that maybe some projects… a lot of projects seems to be local. They start in one region and then the participants only focus on that region as opposed to looking across the world and so I get a feeling sometimes that maybe some people in Europe are going to look at European projects and then people in Asia are going to get Asian projects, but there’s no reason. It doesn’t have to be this way.

I agree. And do you have any advice for even project leaders and CEOs who need to think about their projects globally?

One thing I think about often is there was a social network Orchid that was launched by Google and it was randomly huge in Brazil. Who knows? why Brazil? And I don’t know exactly why it was huge in Brazil, but it could just be randomly that…

They have product-market fit, a lot of people were there, and all of a sudden, all of Brazil are on Orchid and there you go, you have a social network. And I’ve always said that you never know, maybe you create something and you don’t know necessarily where it’s going to stick or who your best audience is going to be, and being in many jurisdictions and many countries I think is a good approach towards that. And I guess one advice I would give is you know don’t ever look at any locale… you don’t know where your users are necessarily going to be.

In that respect, I think that we could be doing a little better with localization of documents. I think it’s important to be available in many languages. I know that there’s a translation effort that Tezos Korea does and Tezos Japan does.I often see materials in Korea or Japan on the web and Japanese on the web. So that’s great. I’m also biased because of the media that I read, like I read Twitter, but I’m not a fan of Telegram so I’m probably missing out on all the Russian, I’m not on Kakao.

Yeah, it’s tough. I think the answer to that is decentralization. I don’t know enough about Korea, but the people in Korea knows about Korea. So I think it’s great if they are empowered to make decisions locally.

So there are Tezos communities all around the world. And these communities had already organized by themselves before even getting any kind of support from the Tezos foundation. They were organized in the form of meetups, in the form of small events, very often forums and things like that. And out of all those organizations, there are a couple of them that decided to move one step more, one step higher in the legal form in such a way that they can be supported with funds from the Tezos Foundation.

And now all these organizations have a legal framework in which they operate. Most of them tend to organize as foundations, which means that they have their own board members that are all local, that they have team whose job is to organize events that can be events for the community, that can be research and development related events, partnership with universities, training and all types of events. And so those are the big 5 communities that are organized and many smaller organizations around the world. There are a couple of associations, and there are also a lot of informal organizations. So many that actually, I don’t know them all.

That is very good because it gives the local support that local users need, in the sense that when you’re a local company and you want to use Tezos, you will feel much more confident if you have in front of you people that speak the same language, that are that have the same cultural background, that know how business is done in Korea, that work with local universities that will be able to train engineers that you can hire.

Immediately, that’s industrial environment that is much more robust and much more comfortable than being and working with companies that are all around the world, where you have to work with American engineers because that’s the only ones that they have, and you have to send them from overseas here and those sort of things.

So it’s really much better for local industries to have a local community, and all the local communities have developed themselves locally. Same thing for Southeast Asia that has a board of Singaporean members, and I think for Japan, that works with local Japanese technical people, marketing board members, industrials, etc. etc. etc. So that allows the Tezos ecosystem to develop first organically and also to have a better development because they know better what is the best for their industry, their country and the way of managing all that. So that’s very good.

Yeah. Is there anything particularly about the Korean community, that you find very unique what these guys are doing here versus the other communities, since we’re here in Korea?

So each community has, because of its leaders and because of the type of network that they have, a has a different orientation. Tezos Korea is very good at the events. The events are very high quality, everybody is impressed by the events that they make, and the visibility that they achieve with those events. Tezos Japan is very industrial in the sense that they have contracts with a lot of industry groups which is very surprising to see how much traction they have in the industry.

Want to hear more? In the following episodes, we’ll be speaking to Tezos Korea and a number of other communities. We’ll go into detail about what’s going on in these local communities and how each of them is organized.

To learn more about Tezos and the Tezos communities, make sure to check out the website links listed below and follow Tezos. This podcast is produced by Global Coin Research.