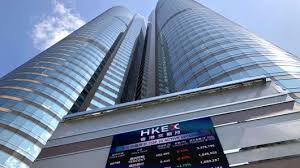 As a financial center of Asia, Hong Kong is a model of globalization. With the slowdown of global economic development in recent years, Hong Kong has been greatly affected. As one of the key technologies of financial technology, blockchain’s importance is self-evident for Hong Kong, which is a finance hub and is looking for technology breakthrough.

In the adoption of new technologies, HKEx will gradually explore new technology applications including blockchain and cloud computing in a pilot-based manner. For example, the HKEx will apply blockchain technology in the post-transaction allocation of the Shanghai-Shenzhen-Hong Kong Stock Connect.

At present, the development of blockchain is getting more and more fierce. On February 28th, China Internet Network Information Center (CNNIC) released the 43rd Statistical Report on Internet Development in China.

According to the report, as of June 2018, the number of blockchain companies in the United States, China, and the United Kingdom ranked top three. A total of 298 companies in China are active in the blockchain industry ecosystem.

The top five cities in terms of blockchain enterprises are Beijing, Shanghai, Shenzhen, Hangzhou Guangzhou. Among them, Beijing ranks first among 175 blockchain enterprises. In 2017, the Hangzhou government plans to build a “blockchain city”. This move is an attempt to realize the “Blockchain 10 Policies” in Guangzhou Huangpu District and the development zone. In April 2018, the “Hangzhou Blockchain Industrial Park in China” was established, consciously occupying the active position, actively guiding the development of the industry and seizing the commanding heights.

Domestic mainstream first-tier cities have entered the blockchain as well. In foreign countries, in 2014, the United States has begun to think about cryptocurrency regulation. The SEC (US Securities and Exchange Commission) has repeatedly talked with the cryptocurrency world. In recent years, the SEC has approved the STO project, New York. The approval by the Financial Bureau for stable currency is closely related to research over the years. Singapore, the blockchain launched in 2016 The “Sandbox” mechanism has worked and more than 200 Chinese companies have landed in Singapore.

Whether Hong Kong can take the lead in seizing the highlands and become a blockchain city under the pressure of internal and external pincers will become the focus of all parties’ attention.

In fact, Hong Kong has maintained a cautious attitude towards cryptocurrencies and exchanges with financial attributes. There are even comments that Hong Kong’s attention on blockchain does not match its financial status in a global c.

Subsequently, November 1, 2018, the Hong Kong Securities and Futures Commission issued a new regulation for virtual assets called the “Regulatory Framework on Management Companies, Fund Distributors and Trading Platform Operators for Virtual Asset Portfolios”. This marks one of the first moves made by the regulators.

Some pointed out that while this seems to be a regulatory policy, but in fact, its Hong Kong’s way of accepting cryptocurrencies and their exchanges. Some even commented that Hong Kong has since become a “digital currency port” and can once again be on par with London and New York.

In fact, on November 2, 2018, Li Xiaojia has revealed that the HKEx is creating a blockchain system that will be integrated with t Kong Stock Connect. Today, Li Xiaojia once again emphasized this point in the Strategic Plan of 2019-2021. It can be seen that Hong Kong is expected to seize the trend of Blockchain city with Shanghai-Shenzhen-Hong Kong Connect.

When Li Xiaojia attended the forum, he said that the HKEx is eager to innovate and will start investing and comprehensive reforms in the future, not only in the regulatory but also on exchange innovation, including research on automate procedures, test blockchain technology, also consider setting up world’s first data exchange.

Analysts pointed out that a series of policies and geographical advantages show that Hong Kong is becoming a hot spot for the development of blockchain industry. The strong development of financial technology will help Hong Kong to take off again.

But now it is only a small start. In the future, whether Hong Kong can grow into a “blockchain city” requires support and cooperation in various aspects such as policy, technology talent.

This article is a translation from 36kr.