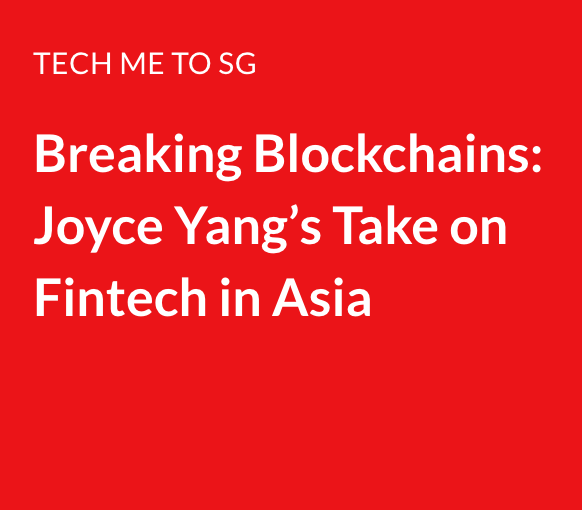 This article originally appeared on Singapore Global Network–  a division in the Economic Development Board (EDB). The SGN looks to broaden and deepen Singapore’s overseas networks, comprising Overseas Singaporeans as well as friends and fans of Singapore.

“Public blockchain tech and cryptocurrency are global and borderless, and Singapore is setting the tone.” says Joyce Yang, CEO of Global Coin Research.

An expert in Fintech, Joyce shares why she believes Singapore can be the Fintech hub of Southeast Asia. jual tramadol online https://99percentinvisible.org/ tramadol shop apotheke Based in New York, Joyce is married to a Singaporean and frequently visits Singapore where she fondly regards as her future home.

Fintech investments are led by the United States in trading volume now, but Asia is not too far behind, according to a report issued by Ecosystm. Joyce Yang agrees. In 2015, she founded Global Coin Research, a prominent English research and advisory platform focusing on Asia cryptocurrency and blockchain. As a leading speaker in this area, Joyce has seen first-hand their immense growth potential across Asia.

“I got the chance to go to Korea, Japan, Taiwan, Singapore, and Thailand last year. Visiting the crypto hubs in every one of these countries allowed me to engage and learn about different cultures and business practices,” Joyce shared.

From East to West

Joyce witnessed the proliferation of technology in both the east and west. Raised in China, she emigrated with her family to New York when she was 10. “After graduating from Harvard, I spent five years in San Francisco as an equity research analyst for Merrill Lynch. There, I was inspired by the start-up mentality and entrepreneurial spirit in Silicon Valley,” she noted. Her love for the Valley extended to romance when she met her Singaporean boyfriend-turned-husband who had also worked at a start-up.

Joyce with her Blue Apron colleagues in 2017

As her husband talked up Singapore, Joyce felt drawn to her Asian roots. Even though they are based in New York, she travels to Singapore every couple of months. Through her engagement with the cryptocurrency communities in Asia, she believes Singapore has the chops to be the Fintech hub of Southeast Asia.

It only takes a win

“I see an increasing gravitation from crypto communities to Singapore because of the city-state’s regulatory friendliness and transparency,” Joyce asserted.

In her early career days, Joyce learned about start-ups and tech businesses from founders like Aaron Levie, CEO of Box

“Public blockchain tech and cryptocurrency are global and borderless, and Singapore is setting the tone,” Joyce explained. Singapore’s history as a finance hub makes it one of the leading countries in the world to set the direction for this nascent technology.

“When the world is still scrambling to form their opinions on what role blockchain and cryptocurrency play in their country, Singapore really stands out as a financially and technologically savvy jurisdiction,” Joyce said. “When we advise western audiences to go to Asia, we tell them to first start out in Singapore and Hong Kong.”

Singaporeans tend to be more reserved and take calculated risks, which is to be expected as there haven’t been many breakout tech start-ups here, observed Joyce. “All it takes is a few wins to shake up the industry,” she forecasted. The rigorous education and discipline help Singaporeans outperform their peers in tech start-ups. As the talent pool sees the benefit and rewards of building a tech company, Joyce expects to see more local breakthroughs. “We are already seeing more Singaporeans jump into tech in Singapore or making the move to New York or Silicon Valley.”

Further, Southeast Asia has many hungry developers. “They hope to cash in on the cryptocurrency and blockchain gold rush, so Singapore can be the cornerstone on which developers build the industry,” she said. A good number of large corporations, such as Stripe and Facebook have already set up base there.

For the long term, Joyce is considering moving her family to Singapore.

Joyce got married in Singapore two years ago and it was the most unforgettable getaway for her. Many of her American friends visited the country for the first time!

Joyce feels Singaporeans are multicultural by nature. They are heavily influenced by, and have incorporated, many cultures into their upbringing. She also likes Singapore’s geographical proximity to China. “I grew up speaking Mandarin and I want my kids to do so as well.” said Joyce.

During her last visit to Singapore, Joyce learned much about lo hei and the meaning behind the gifting of oranges!

As China rises as a superpower, she hopes her children will embrace different ideas and perspectives from both the east and west as early as possible. After all, if they want to get a head start in the digital economy they can’t do better than in Singapore, at the epicenter of change.