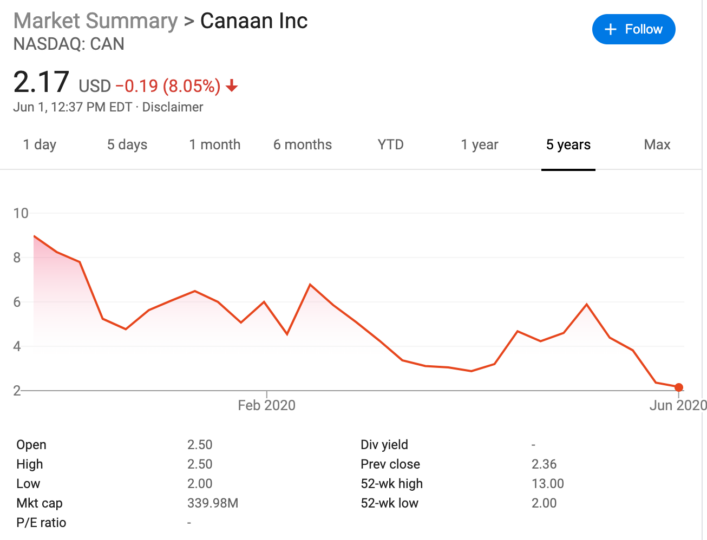 As shown by filings data retrieved by Blockbeats, by March 31, Fidelity has increased its holdings of 2,338,558 shares of Canaan. Cumulative holding shows ownership of 1.49% of Canaan’s shares. In addition, hedge fund Renaissance technology also purchased 17,400 shares.

It is worth noting that for the past quarter, the share price of Canaan has reached the lowest point since IPO, which may be driven by the expiration of early shareholders’ lockup period that occurred on May 19th, along with the decline of mining activity after the Bitcoin halving. Nevertheless, the low price may also be a welcoming and opportunistic time for investors to enter.

While most large funds such as Fidelity and Renaissance have one or multiple EMEA or China-specific investment teams, the large holding by Fidelity seems to demonstrate a strong conviction in Chinese companies as well as cryptocurrency.

In fact, Fidelity is notable as one of the most enthusiastic institutions in the traditional financial industry about cryptocurrency. It was one of the first investment companies to invest in bitcoin mining, and the company has made large-scale investments. It is also one of the few companies that has obtained a New York state bitcoin operating license. Recently, Fidelity announced that they have invested $ 14.20 million in the Hong Kong cryptocurrency exchange OSL.

Such behavior seems to contradict Trump’s urge to decrease investment in China. As Mr Trump has been criticised for his handling of the pandemic, he has blamed China and suggested that Beijing would pay a price.

As of May 21, President Donald Trump has ordered the main federal government pension fund not to invest its portfolio in Chinese companies, which his administration says pose a serious national security risk to the US. Nevertheless, it appears other large independent hedge funds and asset management firms have yet to curtail their ownerships.