Bitcoin is Now Uncorrelated to the Dollar, Should You be Concerned about the Rising Yields??bitbank Market Report 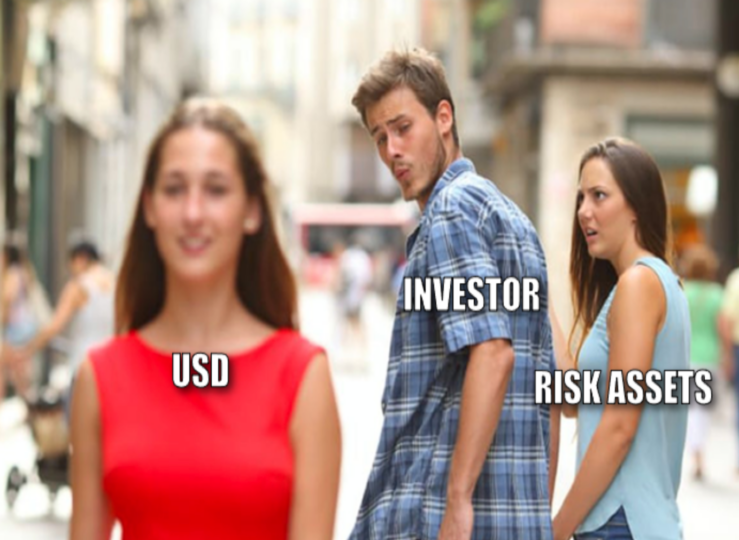 By Yuya Hasegawa, a Market Analyst at bitbank, inc.

What a month! Bitcoin just printed the biggest monthly candlestick ever, ranging from ¥3.38m to ¥6.15m (low to high). February was yet another wild ride for crypto, starting with Tesla’s $1.5b bitcoin purchase, Bank of New York Mellon’s (BNY Mellon) crypto custody announcement, to Morgan Stanley and Blackrock’s announcements that they are considering bitcoin investment. These developments, of course, are signs that bitcoin is getting the recognition it deserves and gaining legitimacy as an asset class.

As a result, the price of bitcoin rapidly climbed higher and higher without taking a breath from the beginning of the month, and breached $40k and $50k psychological levels in a matter of 10 days since the world was shook by Tesla’s bitcoin purchase.

While bitcoin’s impressive price action amused investors and market watchers alike, the subsequent pullback was quite abrupt as well, retracing almost half the gain within the last eight days of the month.

Although bitcoin’s wild price swing is nothing new or surprising, its recent price movements have propelled a noteworthy trend that has been happening since January: bitcoin’s breakaway from inverse correlation with the greenback.

As can be seen in Fig. 2, bitcoin and dollar index’s (DXY) 60-day rolling correlation has been weakening since January and fluctuated near 0.0 for the entirety of February, meaning that the inverse correlation, or any correlation between them for that matter, has completely disappeared. Come to think of it, DXY has hit a bottom in January as the US 10-year treasury yield recovered 1.0%, and it has been moving mostly sideways at a slightly higher level ever since. So, it seems like bitcoin should have hit a sealing somewhere back in January but it has been doin more than just okay. This, of course, has to be attributed to a number of positive developments for bitcoin as mentioned above, but there also is something else at play here: rising inflation expectations, or, more specifically, 10-year breakeven inflation rate (T10YIE or BEI).

BEI is derived from 10-year treasury constant maturity securities and 10-year treasury inflation-indexed constant maturity securities, and represents market participants’ expected inflation rate in the next 10 years, on average. Put simply, it is the difference between the nominal yield and the real yield of the same maturity, and is a measure of expected inflation.

BEI has been fluctuating above 2.0% since January and climbed above 2.2% in February for the first time in about 7 1/2 years (remember, the FED’s target for inflation is 2.0%). So, there is a rising concern for inflation in the market and this seems to be another contributing factor for bitcoin’s price appreciation and its breakaway from the inverse correlation with DXY.

On the other hand, higher inflation expectations can drive the yields on government bonds even higher, and this in turn will attract income-seeking investors to the greenback. So, while there are concerns for inflation looking forward, some market participants seem to be pulling away from riskier assets like crypto and stocks (dividend yields of technology companies in the S&P 500 is said to be only 1.0% on average, for example).

However, as mentioned above, the dollar’s movement is not inversely correlated to that of bitcoin at least for now, and bitcoin is deflationary and has been performing well under the growing inflation expectations, especially compared to gold, so the trend, or the velocity of its price appreciation, may slow down in the coming months due to less money flowing into risk assets, but there is a good chance that bitcoin will perform relatively well in a tug of war between rising treasury yields, thus appetites for USD, and inflation concerns.

Also, there will be another FOMC (Federal Open Market Committee) meeting this month (16th-17th). The market has been worrying about earlier-than-expected tapering for the past two months, and, although FED’s chair Jerome Powell and others have repeatedly mentioned that they are going to keep the current monetary policy ‘for some time’, the concern is a persistent one as this is an eventuality and the only matter is when will it happen.

However, there is a good chance that the FED will send a stronger message this month as the stock market is becoming volatile and they are going to want to suppress that. In other words, any slightest hawkish remarks can cause a taper tantrum and add fuel to the current stock market volatility, so they will likely to double down on the tone that they are going to commit to the current program so as to reassure the market.

All that being said, it may be too early to be too optimistic about bitcoin’s short term outlook either. The recent sell off from $58k to $45k has shocked the crypto market and a short-term correction may not be completed yet. Plus, the month of March has historically been a weak month for bitcoin, so given the cyclicality of the market, odds are not looking too good (see Table 1 below).

Therefore, this month’s bitcoin may continue to retrace some of the gains from February, but not to a great extent if macro factors favor the market. The January high of $42k will likely be a strong support for short- to mid-term, and if the price successfully consolidates at a higher level, there still is a good chance that bitcoin will retest the $50k later in the month. In other words, $42k will be sort of a psychological tipping point and if the price fails to maintain that level, it can greatly shift the market sentiment to a bearish one.