Blockchain Investment and Funding Yearbook 2020 — Over US$3.5bn raised with 35 institutions investing 6 times or above 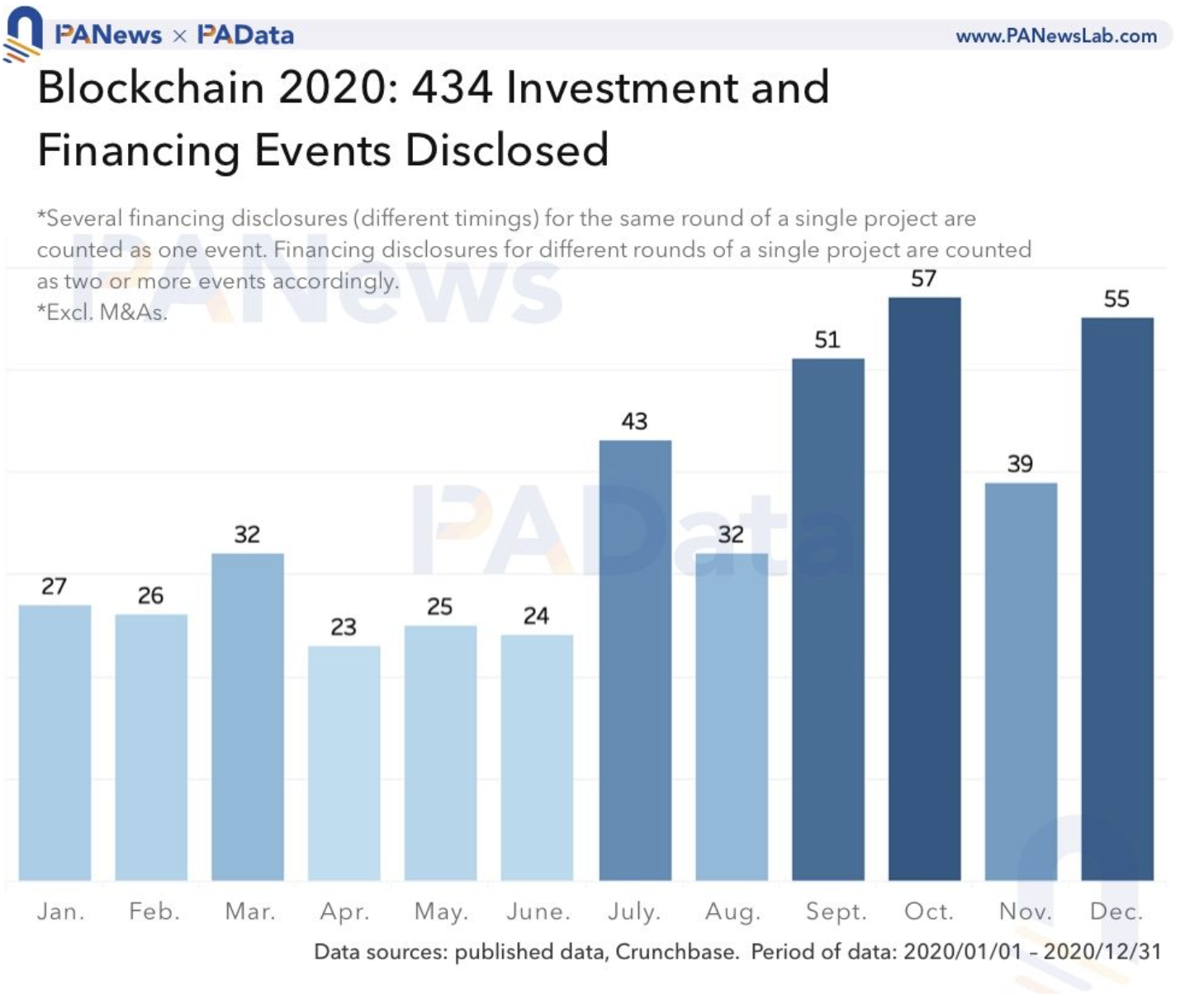 In 2020, the blockchain industry thrived with new trends, among which DeFi gained the most attention. According to Arcane Research, the total value locked (TVL) in the DeFi sector increased by 2,100% last year while the number of independent addresses grew 10 times.

The prosperous industry has attracted more capital injections into the area. A rapid growth was maintained in the past year with disclosed investment & financing volume totaling US$3.566 billion (excl. M&As). By digging into released/published data, PAData illustrates the industry’s funding and investment fundamentals, key segments and active investors/institutions with a focus on the movements of such key businesses as DeFi, exchanges, and public chains in the industry.

There were 407 projects released funding information (excl. M&A) in 2020, totaling 434 investments & financing events with some projects completing several funding rounds during the year.

Regarding the timing of information disclosure, Q4 was the most active quarter with about 151 projects announced, followed by Q3 of 126, Q2 of 72, and Q1 of 85, in line with the  market trend in blockchain — more projects invested/funded as time went.

Regarding the funding volume, Q4 ranked the top with a total of US$1.227 billion, which amounted for 34.41% of the year. The rest quarters were close in disclosed amount — US$827 million in Q1, US$779 million in Q2, and US$733 million in Q3. May and December were top single months by disclosed funds during the year, US$476 million and US$460 million, respectively.

DeFi: The least funding volume with the most rounds

By segment, cryptocurrency projects received the most attention from investors, which attracted a total of US$1.72 billion (disclosed volume) last year, accounting for 48.37% of the annual total, followed by DeFi, of which the disclosed amount hit US$827 million. However, neither projects in infrastructure technology nor those in other areas of the industry surpassed US$500 million, which stayed at US$490 million and US$417 million, respectively. Cross-segment projects received the least capital injections with less than US$100 million accumulated in total.

Zooming in market segments, we find that exchanges, digital assets management, and DeFi were the top three segments earning the most funds in 2020, among which exchanges disclosed a total of US$896 million, translating to 52.09% of the total volume in cryptocurrency, or 25.13% of the total in blockchain. Digital assets management, a segment closely related to cryptocurrency, has been under the spotlight in the market, which attracted US$593 million by disclosed investment and funding volume last year, second to exchanges.

DeFi, a segment opposite to exchanges, saw a breakthrough growth in 2020. Its accumulated funding volume reached about US$278 million, equivalent to 33.62% of the total in industrial application segment, or 7.8% of the total in blockchain. Furthermore, such projects in segments of tool, protocol, stablecoin issuer, database, payment, investment, and “investment/incubation”  all exceeded US$100 million, respectively. Projects in different segments demonstrated different levels in financing capabilities.

The industrial application projects dislosed the most investment and financing events by number in 2020, a total of 158 projects. The average funding volume by project was not so impressive as it was around just US$7.01 million.A similar trend was seen in the infrastructure technology segment. Although 105 projects released their funding details, the average volume by project was only US$8.16 million.

Other segments including database, exchange and digital asset management, shown impressive capabilities in financing. The average funding volume by project surpassed US$20 million. However, that in DeFi was only US$4.8 million, the least in all segments regarding the financing capability. It’s worth noting that New York-based crypto lending platform BlockFi’s completion of a US$50 million financing round became the top financing event by project of the year.

Most were early-stage investment and funding

Most investment and financing events taking place in the blockchain industry in 2020 were at their early stages with 296 out of 434 events disclosed funding progresses. In detail, 98 in seed round, 44 in Series A round, and 38 in strategic investment, totaling 180 events, or 60.81% of the total. By key segment, the majority of the industrial application projects focused on seed round/ strategic investment, a total of 57 such rounds of investment. In addition, there were five Series C round financing events disclosed their progresses, such as data service providers Digital Asset and Chainanalysis.

Infrastructure technology and cryptocurrency projects focused more on seed round, Series A round, and strategic investment. In cryptocurrency, there was one Series C round, one D round, and one F round financing events, namely stablecoin issuer Paxos, digital bank N26, and crypto exchange Robinhood, with the funding volume exceeding US$100 million each.

By disclosed funding volume regardless of channels, Series B rounds, C rounds, and A rounds recorded the highest financing rounds in 2020, all above US$350 million. The accumulated amount in Series B rounds topped the chart with around US$466 million. ICO is still a key business financing tool in blockchain. Last year, the rasied funds relating to ICOs also exceeded US$225 million though that to STOs was lower, only at US$19.8 million. The only IPO event was crypto exchange INX disclosed a US$7.50 million IPO last September. The mining company Hut8 disclosed its Post-IPO information last July.

35 institutions invested in six projects or above

A total of 705 institutions (incl. individual investors) funded in blockchain in 2020, among which 35 invested in six projects or more. NGC Ventures topped the chart by investing in 22 projects such as ForTube, Linear Finance, and Math Wallet, followed by such investment institutions as Pantera Capital, Coinbase Ventures, Alameda Research, and Polychain Capital, who all invested in 15 blockchain projects or above. ParaFi Capital, HashKey Capital, IOSG Ventures, Digital Currency Group, Dragonfly Capital, Framework Ventures, and Three Arrows Capital all invested in more than 10 projects. The above 12 institutions were the most active ones last year.

Regardless of the difference between leading and following, the average investment volume of a single investor is calculated as following: Total funding divided by the number of participated investors. The result is only an estimate without considering the differentiation, which should be only served as a reference for the purpose of understanding investors’ behaviors.

As statistics show, 29 investment institutions injected over US$20 million into the blockchain industry in 2020, among which Guy Schwarzenbach and Addition invested over US$100 million in total. Published/released data indicated that Guy Schwarzenbach invested US$103.4 million in the Swiss crypto bank SEBA in January 2020 while Addition invested in the data service provider Chainanalysis last December, at an estimated amount of US$100 million based on mean prediction.

Furthermore, the investment made by Baidu, Pantera Capital, and Ribbit Capital all exceeded US$60 million by amount in 2020. The Internet giant Baidu invested US$85.1 million in Yusys Technologies in January while the fund allocations of Pantera Capital and Ribbit Capital were more diversified. For example, Pantera Capital invested in Acala, Amber Group, Balancer, DODO, Wyre, etc. while Ribbit Capital went for Chainanalysis, Lightning Labs, and Robinhood. It’s clear that institutions with different backgrounds show different logics and preferences in choosing projects. Through a simple classification by nature of the institution, we find that exchanges preferred to invest in cryptocurrency projects, more relevant to their own businesses. Exchanges invested in a total of 13 cryptocurrency projects in 2020.