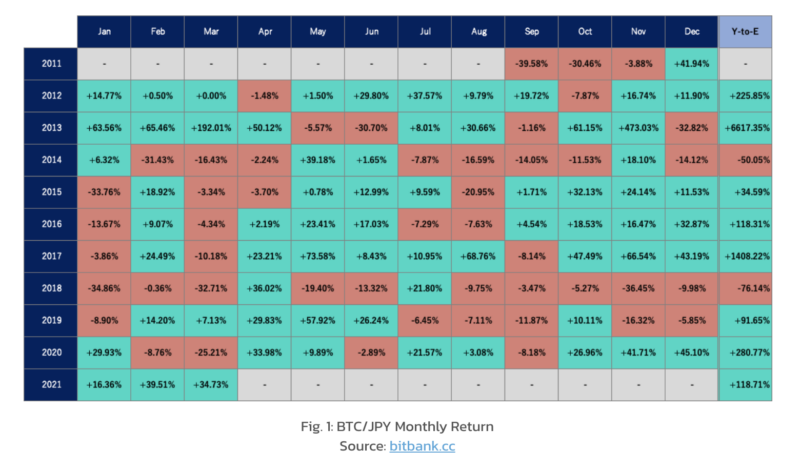 Bitcoin had yet another record-breaking month in March where its price soared ¥1.67m (34.73%) and closed above the ¥6m for the first time. It was the biggest monthly increase ever for bitcoin and recorded six consecutive monthly gains for the first time since April 2013. Furthermore, bitcoin broke the bearish March anomaly and gained 118.71% against JPY since the beginning of the year.

The first half of the month saw an impressive rally from ¥4.8m to ¥6.7m, fueled by the US stimulus check expectation, Galaxy Digital’s bitcoin ETF, and other positive developments for the crypto industry, although it was followed by a sharp price correction due in large part to the snowball effect of long liquidations. Shortly after, bitcoin bounced back as the FOMC quite drastically raised economic projections for 2021, which includes a projection for inflation, and kept the projected median Federal Funds Rate (FFR) at near-zero until the end of 2023, but the jump in US treasury yields had spooked the US stock market and suppressed bitcoin’s upper potential.

The latter half of the month started with another selloff?this time caused by the Fed’s chair Jay Powell’s comment on bitcoin that it has no backing and is not suitable for payment?and this caused the price to break down from the February high against the USD. However, bitcoin showed a strong rebound from ¥5.5m towards the end of the month as the US stock market bounced back and VISA and PayPal’s crypto payment services started, and closed the month around ¥6.5m.

Of course, correlation does not guarantee causality between the two variables, but there can be a logical hypothesis to connect the dots. Since the US 10-year treasury yield recovered 1% at the beginning of the year and later the pre-pandemic level, there has been some worries for inflation spiking up (hence, the surge in BEIs), but the higher yields puts pressure on the price of gold, which is said to be a hedge against inflation, so investors are buying bitcoin instead, which is not historically related to treasury yields and its scarcity is guaranteed by its code.

Again, this is just a hypothesis, but even if we extend the data range from Jan 1, 2020 to Mar 31, 2021, R2s for bitcoin and 5-Year US BEI reads 69.1%, which is considered to be a decent positive correlation, so it is safe to say that we should keep a close eye on US inflation expectations.

What to Look for in April

Keeping the theme with the previous discussion, one of the major economic data we should look out for in April will be ACTUAL inflation data in the US, such as Consumer Price Index (CPI, Apr 13) and Personal Consumption Expenditure (CPE, Apr 30). These are some of the important economic data for the FOMC as they base their policy on them. However, contrary to the markets inflation expectations, these numbers have actually been flat or even declining for the past few months, meaning that actual inflation in the US is still quite suppressed.

But one thing we have to consider this month is that the base effect may kick in and inflation may look like picking up its pace fast. This is because policymakers and markets look at inflation data by comparing them from 12 months before, and since the US economy had to step on a break 12 months ago due to the pandemic and so did the inflation.