An Analysis of Ethereum Front-Running and its Defense Solutions 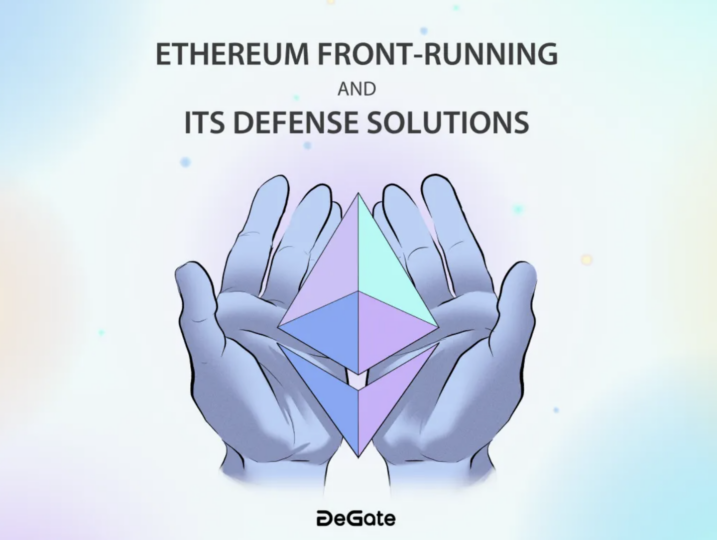 You will need 100 $GCR tokens to join the Discord members-only channels. You can purchase the token on Uniswap here. Get a feel of the Discord community here.

This article aims to provide a comprehensive analysis of a common attack on the Ethereum blockchain: Front-running. We will be examining its characteristics to find the most effective solution and ultimately helping DeGate users avoid this seriously damaging attack.

To put it simply, front-running is an attack in which a bot pre-empts a normal transaction while it is waiting to be packaged by setting a higher gas cost to complete a transaction at a preferential rate before the attacked transaction happens.

Mempool is a set of Ethereum transactions that have been broadcast to the network and are waiting to be packaged into blocks. It is the premise for the implementation of front-running.

The front-running robot analyzes and finds targets that can be attacked by continuously scanning transactions in the Mempool. The image below shows a Mempool browser that allows you to subscribe to transactions in Mempool and view all the details of those transactions by setting various filters.

Among all front-running attacks, the most typical and most dangerous is “Sandwich Attacks” against AMM transactions. In addition, there are also front-running attacks against arbitrage, clearing trades, flash loans, etc., which exploit system vulnerabilities to profit. There are a large number of attackers controlled by automated scripts. They are essentially automatic and indefatigable, so any profitable deal is subject to their saturation attacks, with seemingly little chance of escape.

In the image above, three transactions are packaged in the same block, with a normal transaction sandwiched between two attack transactions (marked by hackers). The specific process is as follows:

Underlying Principles Behind the Attack

To understand the underlying principle behind the attack better, let’s provide some background knowledge.

As we know, today’s mainstream Decentralized Exchanges (DEXs) such as Uniswap, adopt the Automated Market Maker (AMM) mechanism and its price follows the constant product formula.

For example, if a liquidity pool of A tokens and ETH is created in Uniswap, with 1000 A and 100 ETH, the product of the two quantities is 100,000 and the current price of A is 0.1 ETH. When Alice tries to buy A from the pool with 10 ETH, the amount of A, denoted by X, that she gets can be derived by the following formula (note: for simplification, the transaction fee is not taken into account in the following):

Next would be Alice’s normal transaction. Notice that the number of A in the flow pool becomes 952.38 and the number of ETH becomes 105:

Of course, the actual ahead attack would be more complex, and requires more sophisticated calculations to achieve two goals:

Let’s describe this process better with the following diagram:

Now that we’ve seen how deadly front-running can be, so what can we do to stop a pre-emptive attack?

As a general user, there are several ways to deal with front-running:

It can be seen that the above solutions are flawed. Fortunately, many teams recognize the dangers of front-running and have come up with several constructive solutions. First of all, by analyzing the entire process, we can conclude that several elements are needed to implement front-running:

The countermeasures work on each of these elements in turn.

Since bots analyze transactions in Mempool to decide whether to launch an attack, wouldn’t it be better to encrypt the transaction information so that bots can’t see or understand it?

There are proposals in the community to use zk-SNARKs, a zero-knowledge-proof technique, to achieve this goal. In other words, zk-SNARKs would be used to encrypt and hide the information of each transaction, so that the bot could not do anything about it.

However, this approach is not mature enough at this time and has drawbacks such as higher gas costs and the possibility that it can be used to perform blocking attacks that result in the reduction of overall liveness.

The current Ethereum transaction execution mechanism is done through gas competition, in which miners  prioritise verifying the transactions of those who pay the highest gas bill. So if we bypass this mechanism and send the transactions directly to the miners for packaging, we can eliminate the possibility of a front-running bot attacking in the middle of the process.

Therefore, a Layer 0-like solution has also found some applications, such as the Taichi service of SparkPool, where the user can directly set the Ethereum node of Taichi in MetaMask so that the transaction can be packaged directly without appearing in Mempool. But the disadvantage is that there is some uncertainty about the time limit of packaging.

In addition, a solution similar to ArcherSwap’s concept builds a bridge between traders and miners, where traders can request miners to package their transactions directly in the form of a reward, which avoids the possibility of Front-Running. Although it feels like paying a protection fee to avoid being attacked, it lowers the trader’s costs and has the advantage of not being charged a fee for failed trades.

Back in 2018, Vitalik offered a solution in the Ethereum research community that when an exchange transaction occurs, the pool price does not immediately adjust to the real price, but instead slowly moves toward the real price within a few minutes. As if the pool has gained a lot of liquidity out of thin air, hence we term this technique as “Virtual Balance”. This new mechanism can greatly reduce the profit of arbitragers, effectively defend against front-running attacks, and at the same time increase the returns of mobility market makers. It can be said that the 1inch Mooniswap is an implementation version of this scheme.

There is also an idea of maximising the liquidity of a particular price range in a trading pool. The greater the liquidity, the smaller the slippage, and when the mobility reaches a certain point. The bots lose their profitability, and the liquidity-focused nature of Uniswap’s V3 version is an effort to do just that.

Outlook for the future

We have every reason to believe that with the persistent efforts of our teams, we will soon be able to provide a fairer and safer on-chain trading environment for our users, as the various solutions continue to evolve and technologies such as the next generation AMM and Ethereum Layer 2 are implemented one after another.