Will Tapering be the End for Bitcoin??bitbank Market Report 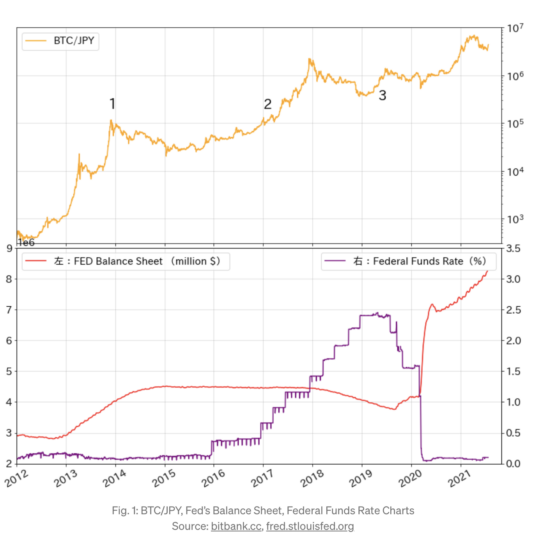 On July 27–28, the Federal Reserve Board (Fed) held its Federal Open Market Committee (FOMC) meeting and decided to leave its monetary policy unchanged.

At the June meeting, the participants began to discuss the timing of the start of the tapering of the $120 billion monthly bond purchases (quantitative easing: QE) that began in response to the spread of the novel coronavirus. This was somewhat a surprise to the market, and further strengthened concerns that the normalization of monetary policy in the U.S. would happen earlier than expected. On the other hand, the hawkish tone of the July meeting was somewhat tempered.

In the post-meeting press conference, Fed Chairman Jerome Powell said that while there has been progress toward the employment and inflation targets, there is still some distance to go before the targets are met. He also said they discussed tapering in more depth, but said that he had not decided on the timing of the start of tapering and that he would continue to closely examine the degree of progress(in the economy over the next several meetings.

Some market watchers have been expecting an announcement on the timing of the start of tapering at the annual economic symposium (Jackson Hole) to be held in late August, but this meeting seems to have significantly reduced the possibility of such an announcement and showed that the Fed is not in a hurry to carry out tapering. In addition, there were calls at the June meeting to start tapering purchases of mortgage-backed securities (MBS) in response to rising prices in the housing market, but Powell said there was only little support for this.

There were almost no new announcements at this meeting. However, since the tapering debate began in earnest in June, the market was nervous about the timing of the start of the tapering, so Powell’s stance may have seemed relatively dovish. Following the press conference, the dollar index fell, gold rose, and U.S. stocks also rose immediately after the meeting, but the major indexes lost ground due to selling related to the subsequent earnings announcements. Bitcoin was sold off before Powell’s press conference, perhaps out of caution, but after the press conference it turned around and regained the loss.

The timing of the decision to begin tapering is an important factor as it signals the end of a liquidity-driven market created by the massive monetary easing measures. Although bitcoin is an asset with a short history, its long-term uptrend from 2012 to 2013 hit a ceiling at about the same time as the Fed decided, in December 2013, to taper the QE, which was first introduced in the U.S. in response to the global financial crisis of 2007–2008, from the Spring of 2014 (see “1” in Figure 1).

Bitcoin in 2020 was also underpinned by this liquidity-driven market, so we have to be nervous about when the Fed will decide to start tapering.

However, looking back at the past, tightening of monetary policy does not necessarily mean that the price of bitcoin will continue to fall to the ground. As is known, bitcoin formed a long-term uptrend from 2016 to 2017, while the federal funds rate continued to rise during this period (see “2” in the first figure), and even during the Fed’s balance sheet reduction phase, bitcoin’s price was rising in 2019, driven by the US-China trade friction (“3” in the Figure 1).

Therefore, while there is a real concern that the beginning of tapering will cause a change in the flow of money, it is also too extreme to conclude that the rise in the price of Bitcoin will end just because the liquidity-driven market is over. At least until the Fed decides when to start tapering, monetary policy is tilted toward easing. In addition, the environment that could support the market is still healthy, including concerns about the expansion of the U.S. debt and high inflation, as well as expectations for the approval of a bitcoin exchange-traded funds (ETF) in the U.S.

So, when will the Fed make the decision to start tapering? According to Caruman Powell at the press conference, the Fed will examine the situation over the next few meetings. The next FOMC meetings are in September, November and December, but can September be ruled out. This is not because the September meeting will only be the next one, but also because the American Rescue Plan (ARP), which includes additional financial support on top of unemployment insurance, will not expire completely until the end of September, so it is expected that the labor force will have difficulty fully returning until then.

Even if there is an improvement in the labor market from September on, the data that verifies it will not be available until October. Also, the data for October, when the ARP has completely expired, will not be released until November, a month further down the road. Therefore, even if we assume that the labor market improves steadily until November, the Fed will not be able to make a confident decision on when to start tapering until the FOMC meeting in December this year.