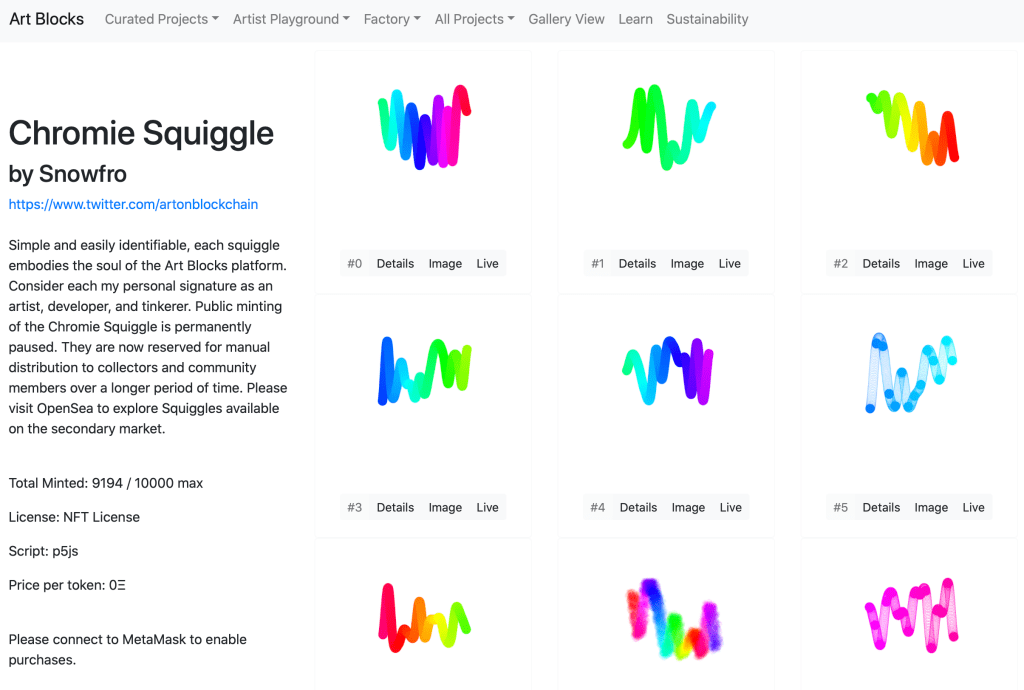 Chromie Squiggle is a generative art project on the Blockchain and the first-ever project released on Art Blocks, one of the leading on-chain generative art marketplace.

The artist behind the Chromie Squiggle collection has successfully gathered a strong community toward his project, making Chromie Squiggles one of the most promising on-chain generative art project today.

These colorful art pieces have took off in less than 6 months, and we’re going to deep dive into the story and the signification of this exciting project.

Generative art is a digital category in which artists intentionally use a computer to introduce randomness as part of the creation process. It’s a new segment of the NFT market that has gained popularity in the last years, partly thanks to projects such as Crypto Punks. The Crypto Punk project appeared in 2017 and paid tribute to London’s early ’70s punk scene and came in the form of 10,000 unique, randomly generated, 24×24 pixel art images featuring humans, zombies, apes, and aliens. It’s one of the original generative art projects. The artists behind that collection played with different parameters in the script to come up with a randomized combination of characteristics for their output (species, accessories, hairstyle).

In generative art, instead of designing pieces from beginning to end and controlling the whole creation process, artists create a script that generates random output based on the different characteristics implemented in the script. This art process, while not new, has seen a surge in popularity in the crypto space as generative art combined with Blockchain offers a whole new world of possibilities.

Indeed, artists can now write scripts on the Ethereum blockchain, making the script permanent and verifiable by anyone, allowing anyone to run the script and create a new piece of art. Thanks to blockchain mechanisms, artists can now set in advance the number of iterations possible (number of pieces created), and potential buyers are assured that they have an equal chance to mint a rare piece. What would have been impossible few years ago is now enforced on a blockchain, which makes the whole process trustable by both parties. In non-generative art projects, artists usually create several pieces for a collection and sell the rarest pieces at a higher price. On the opposite, with on-chain generative art, anyone pays the same price to create a new piece on the primary market, hoping to collect an output with rare characteristics.

To create a script, artists use various forms of controlled randomness as part of the creative process and play on different parameters. Some parameters are harder to get, and some NFTs come out with elements that have been seen in only 0.2% of all the collection, for example.

But this new form of art comes with new challenges for artists. As anyone can create a new iteration, and as everyone is paying to run the contract, the artists have to make sure all of the outputs are worth the price. It makes the “average” output from the script crucial. While, in the past, artists were usually creating thousands of pieces and were keeping and selling only the best ones, they have to make sure today to create a script that doesn’t create any bad outputs. Once minted by someone, the artist can’t delete a piece. Every new iteration is as visible as any other one, putting pressure on the artist to create a script that only runs good outputs. One single bad result lowers the quality of the whole collection. Artists don’t have control over the output of their collection, which makes on-chain generative-art NFTs one of the most exciting segments in the NFT market, in my opinion.

2 – The origin of Chromie Squiggle

The project came to life when Snowfro decided to send Chromie Squiggles to Huston’s design industry. The Chromie Squiggles were originally created to demonstrate what could be possible with generative minting, proving that it was possible to create thousands and thousands of outputs without a collision (two identical pieces). He started to generate 2000 Squiggles and gave them to his clients and people in the design industry, demonstrating what the technology was allowing and how it could revolutionize the creative process.

The story could have end there, but later on, seeing almost no similar projects to the Chromie squiggles, Snofrow thought it could be a unique and identifiable project that would be worth pursuing. Over the next two years following its first experimentation, he started modifying it, tweaking it, and finally released it as the first project on his newly created platform, Art Blocks. The Chromie Squiggles collection has only 10000 iterations possible, and each Squiggle has very different characteristics (number of points, rate of the gradient, starting color), which makes some Squiggles extremely rare.

3 – The future of Chromie Squiggle

Snowfro, with its Chromie Squiggle collection, is bringing to light a whole new segment of the NFT market and is showing the path to new creative processes. In the same time, the Squiggle DAO’s community leaders are showing a perfect example of creating a strong community toward a joint project. Being the owner of a Chromie Squiggle means being part of a private community with a common goal to empower the on-chain generative art space.

Chromie Squiggles will certainly continue to thrive, and the price to be part of this community will continue to increase. More people will want to be associated with the project’s values and history to gain social status within the crypto community, and more people will want to be part of the Squiggle DAO to learn more about on-chain generative art and get access to potential funding.

Its strong community and the fact that the Chromie Squiggle is part of the history of the the on-chain generative art movement make this collection one of the most exciting projects in the NFT market.

What’s exciting about generative art is that no one knows the output when minting a new piece. It’s the combination of a computer and several humans that makes those pieces of art so interesting. The artist doesn’t control the output, and the person minting the piece is part of the creation process. Purchasing an on-chain generative piece on the primary market is very different than buying 1/1 NFT on the secondary market. It’s an entirely different experience.

When a sale is open, collectors can get a sense of the style of the work by viewing tokens that have already been minted, but they don’t know exactly what they’ll get when they press the “purchase” button. It’s a sort of gambling. A sort of game. You can collect a piece with rare characteristics or get a pretty average piece. But, for few minutes, you’ll get the same excitation you had when you were a kid and opening physical collectible cards.

Here are some Squiggles stats since its launch:

If you found the article interesting, make sure to follow me on Twitter and tip me here! ?