EIV x Bitchcoin: If You Didn’t Know, Now You Know 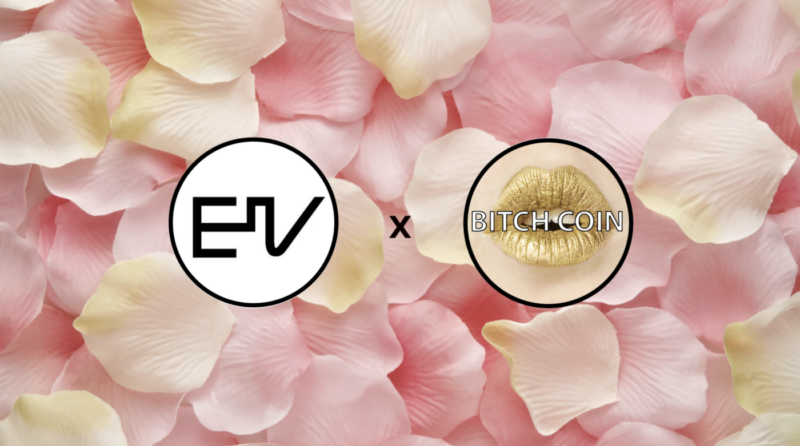 NFTs before they were a thing

Art and humans have maintained a close relationship throughout history, with some of the earliest known paintings dating back nearly 20,000 years. As our societies and technologies evolved over time, so has our art — from masterpieces by Da Vinci, Michaelangelo, and Van Gogh to those by Warhol, Kahlo, Picasso, and Calder.

Today, we discuss the significance of non-fungible tokens (NFTs), which combine characteristics of both physical and digital mediums in response to a world that is fast migrating online.

At e^{i} Ventures, we believe NFTs are groundbreaking because they anticipate a future that is closer than we think. Born from the nexus of core elements of human progress–art, technology, and culture–NFTs are immediately transforming the evolving digital art marketplace, and bringing a necessary utility to gaming experiences and metaverse ecosystems. The blockchain offers an innovative paradigm for the compensation of artists and ownership over their art that otherwise wouldn’t be possible. As the world of crypto matures, NFTs are here to stay as a cultural and financial pillar.

Physical art pieces have been known to be valued at incredible sums–like Leonardo DaVinci’s Salvador Mundi, which sold for over $450M in 2016. What makes these pieces so valuable?

According to TheCollector, the value of a physical art piece is determined by several factors, including:

NFTs have similar factors that determine their value. We believe the following contribute to NFT value:

The case of CryptoPunks helps pinpoint the general NFT phenomena mentioned above. Launched in June 2017 by Larva Labs, Cryptopunks is a set of 10,000 unique algorithmically generated collectible characters. One of the first NFT projects on the Ethereum blockchain, CryptoPunks generated traction early on, with rare types selling for as much as 10 ETH ($2,610 at the time) just weeks after launch.

Though the initial buying frenzy quickly subsided, it has since picked back up, with over 50 punks being sold daily for 12 consecutive days in February of this year. On numerous days in February and March of this year total sales of punks exceeded $1M, with over $15M worth of punks being sold on February 21st and March 11th. Gary Vaynerchuk’s purchase in July, along with a purchase of 88 punks in a single block by anonymous whale trader “0x645” fueled a speculative frenzy resulting in CryptoPunks’ floor price shooting up from 23 ETH to a whopping 32 ETH in just 3 days.

In addition to their early mover significance, the scarcity of CryptoPunks has undoubtedly contributed to their value. A capped total supply of 10,000 preserves the rarity of each punk, while the limited quantity of punks currently for sale makes them a store of value and vehicle for price speculation. Their growing adoption as a status symbol is also a contributing factor–Hayden Adams and Kain Warwick, founders of Uniswap and Synthetix (two of the largest DeFi protocols), both have cryptopunks as their Twitter profile pictures.

You’re no doubt aware of Bitcoin, but do you know about Bitchcoin?

Bitchcoin was a proto-NFT, the first tokenization of art on the blockchain that even predates Ethereum and all Ethereum NFT projects. Originally released in February 2015, the initial batch of Bitchcoins were backed by a physical photographic print from contemporary artist and NFT pioneer Sarah Meyohas. Each Bitchcoin gave investors fractional ownership of the print.

This May, Meyohas migrated Bitchcoin from its own chain to Ethereum and released a new collection of Bitchcoins via a three-day online sale at the Phillips Auction House. Each Bitchcoin in this collection is backed by a unique pressed rose petal from Meyohas’ 2017 seminal exhibit Cloud of Petals. From the total supply of 3,291 Bitchcoins, Meyohas auctioned 480 in the sale. Bitchcoins were purchased in ETH and auctioned off in bundles of 80 and 160 tokens. Buyers have the option to hold Bitchcoins, trade them, or redeem them for the physical rose petals from her exhibit. When this happens, the affiliated Bitchcoin will be “burned”.

The idea behind Bitchcoin is that purchasing one is more akin to investing in Meyohas as an artist and value producer as opposed to just buying one of her art pieces. As Meyohas put it, “The idea of investing in a project, as opposed to buying a physical painting to put on the wall, is more in line with the habits of VC investors”.

e^{i} Ventures is incredibly excited to have Bitchcoin as one of our portfolio projects. Our core thesis can be summarized as follows:

Adoption/Provenance: Influential collectors and thought leaders in both the fine art and crypto worlds have acquired Bitchcoins. It is the significance in both spaces which legitimizes her work’s merit, longevity, and institutional importance.

“Culture is now native to ethereum. Once you get culture, that’s when a lot of people wake up” — Su Zhu

NFTs are a groundbreaking component in the DeFi landscape. Aside from bringing more attention to DeFi and cryptocurrency as a whole, NFTs also represent a symbol of art culture that unites communities of art collectors, project builders, artists and traders alike.

Participating in a Decentralized Autonomous Organization (DAO) in which people pool money to buy NFTs, Tarun Chitra of Gauntlet and Robot Ventures said of pleasrDAO, “the goal…was to…buy paintings that have a social component and also represent the values that pplpleasr’s art does. I think of these things as a community and art museums. You’re never going to own a share of the Met, but at least here you can kind of own a share of these things.” In other words, to own a fractional piece of an artist’s work (via an NFT) brings the role of galleries and physical art into the virtual realm. This reinforces cryptocurrency’s relevance in modern society.

Here at EIV, we believe Bitchcoin to be a prime example of such powerful intersections. As eloquently put by our friend Joyce Yang of Global Coin Research, “Art and NFTs are the future of DeFi, and I see Bitchcoin as an integral part of that future, representing the genesis of art on-chain”.

For the latest, you can find Sarah Mehoyas and Bitchcoin on Twitter.

Brought to you by the team at e^{i} Ventures.

Co-Written by: Srikar, Bowen, Ariana, Ellen, and Grace
Special thanks to Gabe Wise and Will Robinson.