From Web2 to Web3 Marketplaces 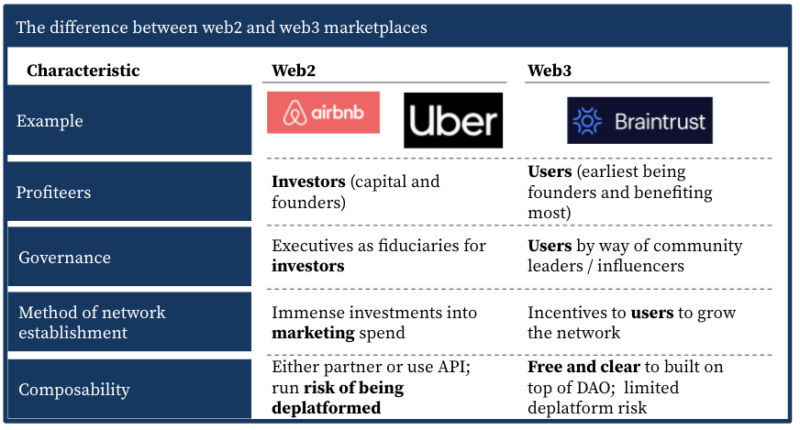 In 1995, a low-key gentleman named Craig Newmark started an email list for local events.  Enabled by the internet, it was then a very novel concept, and.. people loved it.  Word of mouth blew up the distribution list.  To please his eager users, Craig expanded sharing local events to sharing jobs and a number of other things too.  Soon enough the need became clear to evolve the email list to a web platform where users could upload and interact with listings.  With that the first iconic Web2 marketplace called Craigslist was created.  Web2 broadly which innovated on web1 by enabled users to interact with websites thereby evolving them from static to dynamic.

*and* web2 marketplaces like Craigslist had an additional innovation: the digital aggregation of supply and demand, thereby making the experience of buying or selling products or services a whole lot easier.  That aggregation established network effects unlike any anyone had seen before.  The more products and services listed, the more buyers the site attracted, which attracted more suppliers, that listed more products and services, and so on and so forth.  Here’s what that looks like for Amazon, probably the most impressive masters of the web2 flywheel :

Even though Craigslist is astoundingly basic in design, the network has created long-standing defensible moats, and the result: it is still seeing over 300 million page visits per month.

But the early web2 marketplaces like Craigslist still had their problems.  The experience of transacting remained riddled with frictions, primarily around lack of trust.  Stories abound of criminal users that feigned earnest ones.  I remember once buying a used Cervelo P3 (aka a fancy triathlon bike) on Craiglist and getting far too good a deal.  We met in a public place and I paid cash.  Overwhelmed by the deal I acted fast, but on reflection, I realized I must have just supported theft.  I ended up reporting it at the Police station.  Nobody ever came to claim the bike, but I’m sure it was stolen.  That’s an example of the problem with early web2 marketplaces.

Newer marketplaces like eBay emerged to solve these problems with a series of innovations to create / improve trust like payments and escrows, and user profiles with ratings.  eBay incorporated payments through it’s partnership and eventual acquisition of Peter Thiel and Elon Musk’s Paypal.

Web2 marketplaces innovation didn’t stop there.  Dynamics got even better with the advent of the mobile phone in 2008.  Instead of combing through classifieds to find a limo driver you could order your black car ‘On Demand’.  Eventually, Managed Service Marketplaces emerged to eliminate the burden on demand to ‘Pick’ the supply and invest operationally to reduce frictions / improve user experience even further.  We at Setter were part of this last wave of web2 marketplaces, the Managed Service Marketplace, for the Home Services category.  I’ve condensed this section, but essays and essays have been written up on the developments in this era.  I particularly like a16z’s post “What’s Next for Marketplace Startups?”, and Fabrice Grinda’s content from FJ Labs via his playing with unicorns podcasts.

But no matter the reductions in friction, all marketplaces still have one fundamental downside to its users.  Indeed these marketplaces are owned and governed by investors, who while mostly aligned with their users, are not 100% aligned.  You see, investors #1 objective is to achieve return. In order to do that, they attempt to reduce CAC and increase LTV. Both of these metrics improve as the user experience improves. But LTV can also improve by increasing the take rate. Understandably and in order to pay back and justify the immense initial marketing investment they had to spend to start the market, the investor-owned and governed marketplace takes a rake.  The power of network effects, once established, enables the marketplace to charge a rake increasing to and beyond 20-40%, thereby paying back its initial investment and much much more (although in some cases like Uber the return hasn’t quite happened yet).

Take a minute to think about the huge implications of these innovations.

Supply side.  Do you think you’d move your business over to a web2 market? Consider that if you did, you could pay no rake, contribute to decisions, and be rewarded for your contributions and upside.

Now I do not think that web2 marketplaces are not evil. In fact, I think they’re an incredible innovation and a huge net positive. Up until now, having a central investor to bootstrap and establish a network has most definitely been necessary. The question is : now that crypto has some early adoption, can marketplaces be effectively established in a decentralized way?

We now have evidence that the answer is yes. We’ve already seen the establishment of DeFi marketplaces, and another interesting example is Braintrust. Braintrust is a web3 talent marketplace that connects enterprises and startups with digital talent leveraging it’s native token BTRST.  Since emerging form stealth in June 2020, Braintrust did $3.5M of Gross Service Volume in 2020, and are on a $30M run rate in 2021.  It’s not quite Axie Infinity speed, but it’s still damn fast. 2-3 years in, they’re now serving 100 of F1000 companies including NASA, Nestle, Porsche, Goldman Sachs and UnderArmour to name a few.

It’s also governed in a decentralized way which means that you can participate if you’d like. The other day I listened to their monthly update.  Where at Setter we had ‘All Hands’ where we’d discuss progress and objectives together as a company, Braintrust has ‘Community Updates’.  If you’re curious, you can watch it here.

In the 1 hour update they discussed updates to customers, community, infrastructure, and product. Highlights included that in August they saw 81 enterprises posting jobs, up from 56 in July, and that’s before their Coinlist token listing.  I imagine growth may go vertical into September. They also discussed their upcoming release of a public dashboard where the public can see Braintrust progress. It was so fascinating to listen in.

In summary, here’s how Braintrust fits into the web3 framework :

If you believe that the future of marketplaces should be owned and governed by users, then Braintrust is a glimpse of that future. It’s an exciting.. scary.. manic.. and brave new world for marketplaces!

A tech talent marketplace was a great place to start as tech talent already participate in crypto (Mike Williams has a great interview here with Gabe-Luna Ostaseski they discuss this).  Now the natural question is, what’s the next web3 marketplace?