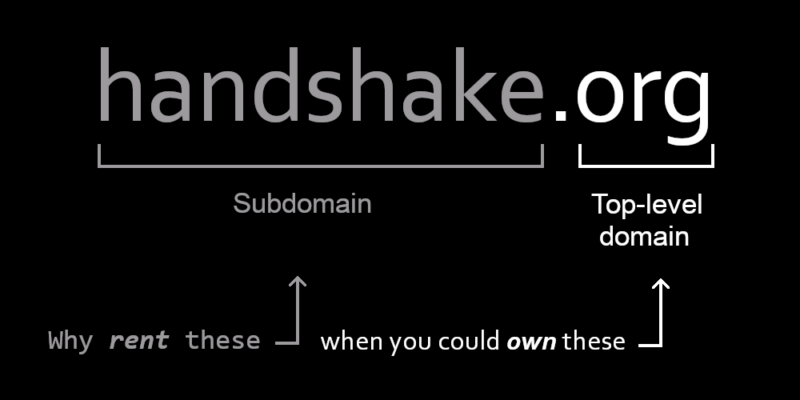 Before there was crypto punks, bored apes, the metaverse, or any other popular NFTs clogging up the Ethereum blockchain there were domain names. Domain names are the original NFTs in the sense that if you have gcr.com no one else use that site and build on it. Famously the bitcoin bull himself Michael Saylor sold voice.com to EOS for 30 million dollars in 2019. The problem is you don’t actually own gcr.com or voice.com, but are merely renting them from a domain registrar like Verisign who manages the most important top level domains like “.com.”

Enter Handshake (HNS) a decentralized naming protocol that is backwards compatible with the current DNS system. Handshake is not seeking to replace the current DNS it is instead expanding the root zone file where the top level domain (TLD) information is stored. The goal is to create an alternative to the existing Certificate Authorities where the names on the internet(domain names, social media handles) do not rely on centralized actors, but instead on a distributed peer-to-peer systems validated by the network’s participants. What this means in layman’s terms is you can actually own your name on the internet. Not only can you own your own TLD, but you could also have your own passive income business where you are renting or selling subdomains off that TLD.

The Handshake proof-of-work blockchain launched in Q1 of 2020 with the top 100,000 Alexa sites reserved for people and companies who own those domains to encourage people to claim their domain name and move over to Handshake. The rest of the potential names and emojis were released weekly over a 52 week period where people could bid on the names through a vickrey style blind auction. To bid on names people are mostly using either namebase.io or the self-custodial bob wallet. As of August 2021 there have been over 1.8 million names registered and 111,000 Handshake names in use. The highest priced auction was for the TLD wallet/ which went for 350,000 HNS(native currency of Handshake) or 87,000 USD. The most interesting trend that has emerged in 2021 along with the rise of NFTs is emojis and emoji combinations in the secondary marketplace.

Emojis are rendered from punycode and can be owned on Handshake. For example, xn--r28h/ renders as ?/. You can also do multiple emojis xn--xp8haa/ renders as ???/. You can even do fun emoji combinations like xn--yn8hyw/ or ?? aka “rabbit hole” which was sold for 10,000 HNS earlier this year on the secondary market.

Here are some of the recent large emoji sales:

Interestingly it looks like domainers have been hoarding the emoji flags as there hasn’t been a big emoji flag sale yet.

The idea of using blockchain technology for domain names actually goes back to Satoshi who presented the idea in a bitcointalk forum. From this idea one of the first altcoins Namecoin was launched in 2011 and was in the top ten by market cap for many years.

In 2021 the two other big projects within the naming space is yats and the Ethereum Naming Service (ENS). Even though emojis within the Yat ecosystem are accessible within the legacy DNS system owning a yat is similar to how you “own” your Instagram handle. ENS is where people can own .eth names and is providing a decentralized trustworthy name resolution to the items in the web3 stack like blockchain addresses and distributed content. ENS seems to be prioritizing the legacy system’s gatekeepers like ICANN and can only offer subdomains from .eth, but they certainly have many more integrations when compared with Handshake.

Besides other crypto native competitors in the name space Handshake also faces an uphill battle with adoption. To access the Handshake sites users must change their DNS settings or download additional, albeit free, software to explore those sites. Browser adoption in the future looks to be essential in onboarding less technical users.

Where is Handshake Headed?

The real question with any sort of crypto project is will all the speculation lead to real users and use cases. Last week NamesCon, the largest domain name conference, hosted a Handshake track as part of their larger conference. At the conference Namecheap, the world’s second largest domain name registration service, announced they would offer Handshake domain name registration services. Handshake is sitting at the nexus of the decentralized web and the NFT space an area of the crypto industry that has seen explosive growth over the past year. if people continue to value ownership over their identity and assets it may be worth investing and building on this new form of digital real estate.