A Different Approach to Buying your first NFT 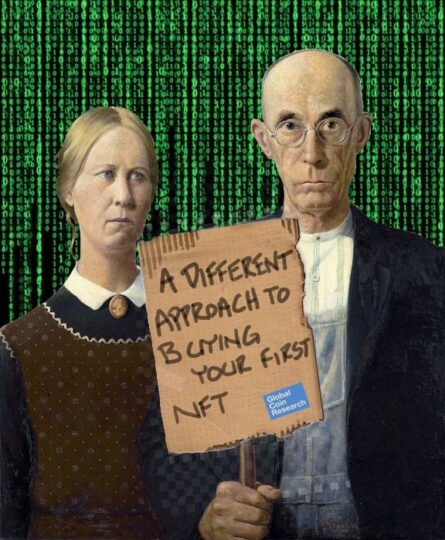 If you have spent any time on Crypto Twitter, then you’ve likely heard this story – Six months ago I traded one Ethereum for one JPEG, and today I just sold the same JPEG and bought my first house or my first Italian Supercar – Sound familiar? It seems like the NFT market is a place where dreams are minted while the super hip scramble about trying to acquire their next digital fixes. And while most of us probably dream of being in the likes of a Cosmo de Medici and retelling stories of sweeping the market floors for yet another Crypto Punk to add to our collections, the truth of the matter is that for many not only is a Crypto Punk, but even dropping a single hard earned Ethereum on a JPEG is out of our reach. And consequently while the market steadily moves through the animal kingdom giving 100X’s from Alien Aardvarks to Zydeco Zebras, many awkwardly just sit on the sidelines in a state of frustration wondering if they will ever take part. So while I agree that there is a significant place for all these moonshot projects to exist, I would argue that for the average NFT curious investor, who isn’t ready to throw down for the sake of pure price speculation, perhaps its better to step back and enter the market from a different perspective – simply thinking in terms of intrinsic value.

1) The value of personal satisfaction

While it might seem like for your first NFT purchase you need to spend countless hours and ridiculous gas fees in hopes of getting that early mint of an Alien Platypus with the extra rare pink hair, a chainsaw and the snowy background, for many that just doesn’t inspire the confidence to spend relatively large sums of Ethereum on what is still at the end of the day a JPEG. And value arguments aside, is that JPEG something that you really adore to the extent that you’d be willing to hang it on your wall over the fireplace? For many my guess would be no. So in this case I would suggest the simplest way to buy your first piece of digital art is to find something you like. Find something that makes you smile, or laugh, or is a souvenir of something you want to remember. Whether it is something that reminds you of a toy you had as a kid, a photograph of a place you wish to travel to in the future, or a friend you haven’t seen in a while, the fact is this does not have to be a deciding moment in your life. Rather this is just a little memorabilia or your first ticket stub to add to your crypto journey scrapbook that you will look back on one day and marvel at how far you have come. So wait till gas fees are low, then head over to Rarible or OpenSea and browse through the countless low-dollar gems for that one piece that just says “buy me”. These are the ones that are often hand drawn or photographed and unique in that many are 1-of-1 or 1-of-20. And as an added bonus, everyone of these has an artist on the other end who will be equally stoked that you not only liked their art, but wanted to support their work as an artist by minting it. So while your first piece of digital art may not have the notoriety of a Blue Chip NFT at the moment, the value in that chuckle or smile that it brings you every time you open up your wallet isn’t going to go away no matter the direction of price action. And, more importantly, you are now one of the first few people on this planet who actually owns an NFT.

2) The value of community

While it may be lucrative to join every 10,000 mint NFT project in the hopes of being one of the first 500 to get whitelisted for a mint, I would argue that the sense of joining a community and investing in ownership of it is something equally rewarding. When you move from a lurker who pops in to gain alpha or ask a question to becoming a member who holds a financial investment and becomes a part of that community the value increases exponentially. Whether your first NFT is an image, a song, a photograph or even just a basic key that grants you access, you are now a member, a partial owner and a contributor. For example, some DAO’s offer early NFT’s that give a lifetime membership, governance voting rights or even potential rewards in future value in the group. In other cases an NFT can open up doors to communities that you never new existed. Discord.art for example has over 50 hidden artist channels that can only be accessed by owning those artists particular works. And the list goes on. There are NFT’s for gaming communities, developer groups, sports fans – the list is almost endless. But by choosing to mint an NFT with with a community that you stand behind and want to participate in, you are creating value and utility for both yourself and the collective community.

3) The value of gift

Lastly if you’re still on the fence about buying a NFT for yourself, what about the idea doing it for someone else and minting a charitable NFT. A bit of the first two in that many of these come with a sense of satisfaction and may also come with a community, but in this case the proceeds of the sale goes to a cause. Whether it is feeding the hungry, getting school supplies to kids or giving to local organization, there are new projects popping up daily in this arena. You get an NFT and someone gets a helping hand. You don’t have to worry if your NFT is rare or not, your action is and therein lies the value.

So if you’re hesitant as a first time buyer, there may be real financial reasons for not jumping into the next trending NFT flavor of the day; however, I really don’t see any reason not to mint something else on the grounds it can have simple intrinsic value outside speculation and risk. Buy your first one just to make yourself smile. From there, follow the artist on Twitter and see who they follow. Join their Discord group as a supporter and art holder and see the doors that can open from meeting fellow community members, see what they like, what they’re building, and what you can be a part of. You might find a new group of new friends, a new hobby you never new existed, maybe a new job in crypto. At the end of the day you might even get that moonshot that brings you that house or Italian supercar that we began with, but regardless you will have an NFT in your wallet and that is only the beginning. Very few people on this planet know what an NFT is let alone own one. The truth of the matter is we are early, we are far ahead of the curve, and most importantly we are going to make it! So why not step out, mint a NFT and spend a few bucks on a digital postcard for what is shaping up to be the trip of a lifetime.