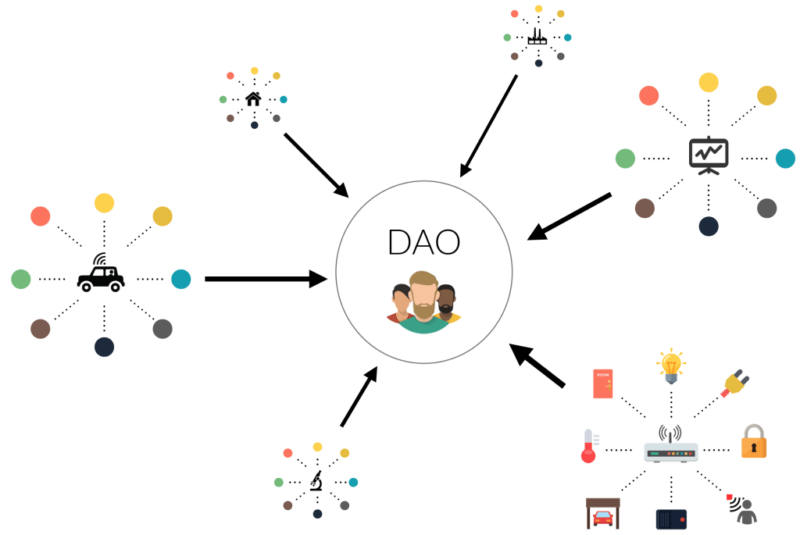 A decentralised autonomous organisation (DAO) does not have a centralised leadership. Bottom-up decisions are made, regulated by a community organised around a specific set of rules enforced on a blockchain.

DAOs are internet-native organisations that are owned and governed jointly by their members. They have built-in treasuries that can only be accessed with the permission of their members. Decisions are made by suggestions that the group votes on over a set period of time.

A DAO operates without hierarchical administration and can serve a variety of objectives. With these organisations, freelancer networks where contracts combine their earnings to pay for software subscriptions, philanthropic organisations where members authorise payments, and venture capital businesses managed by a group are all possibilities.

Before proceeding, it is necessary to distinguish between a DAO, an internet-native organisation, and The DAO, one of the first such organisations ever founded. The DAO was a 2016 initiative that ultimately collapsed, resulting in a catastrophic split in the Ethereum network.

How does a DAO work?

As previously stated, a DAO is an organisation in which decisions are made from the bottom up; the organisation is owned by a collective of members. There are several methods to engage in a DAO, the most common of which is ownership of a token.

DAOs use smart contracts, simply bits of code that run automatically when a set of criteria is satisfied. Smart contracts are being used on many blockchains, albeit Ethereum was the first to employ them.

These smart contracts establish the DAO’s regulations. Those who have a stake in a DAO may then vote and influence how the business functions by deciding on or introducing new governance ideas.

This methodology protects DAOs organizations from being flooded with suggestions by requiring that a majority approve a proposal of stakeholders. The method for determining the majority differs from DAO to DAO and is described in the smart contracts.

DAOs are entirely self-sufficient and transparent. Because they are constructed on open-source blockchains, their code is accessible to everybody. Because the blockchain records all money transactions, anybody may audit their built-in treasuries.

Smart contract creation: To begin, a developer or group of developers must construct the DAO’s smart contract. They can only amend the rules imposed by these contracts after launch by using the governance system. That implies they must thoroughly test the contracts to verify that key aspects are not overlooked.

Financing: Once the smart contracts are formed, the DAO must decide how to receive funding and how to implement governance. Tokens are frequently sold to raise cash; these tokens grant holders voting rights.

Deployment: After everything is in place, the DAO must be launched on the blockchain. From this point on, stakeholders make decisions about the organization’s future. The organization’s creators — individuals who designed the smart contracts — no longer have as much influence over the endeavor as other stakeholders.

Why Do We Need DAOs?

DAOs offer significant benefits over traditional organizations since they are internet-native. The absence of trust required between two parties is a key benefit of DAOs. While a typical organisation needs a high level of confidence in the people behind it, particularly on the part of investors, DAOs require simply the code to be trusted.

Trusting that code is easy to accomplish because it is publicly available and can be thoroughly vetted before release. Every action taken by a DAO once it has been formed must be accepted by the community and be entirely open and verifiable.

There is no hierarchical structure in such an organisation. Nonetheless, it may complete tasks and flourish while being governed by stakeholders through its native token. Because there is no hierarchy, any stakeholder may provide an original concept that the entire group will evaluate and improve upon. Internal conflicts are frequently simply resolved using the voting method in accordance with the pre-written rules in the smart contract.

DAOs let investors pool their cash, allowing them to participate in early-stage enterprises and decentralized initiatives while sharing the risk and any gains that may result.

The primary benefit of DAOs is that they provide a solution to the principal-agent problem. This quandary is caused by a clash of priorities between a person or organisation (the primary) and others who make choices and act on their behalf (the agent).

Problems can arise in a variety of settings, the most typical of which is the interaction between stakeholders and a CEO. The agent (the CEO) may behave in their own self-interest rather than in accordance with the priorities and goals established by the principal (the stakeholders).

Another common example of the principle-agent dilemma is when the agent takes on too much risk since the principal bears the burden. A trader, for example, might employ excessive leverage to pursue a performance bonus, knowing that the company will cover any downside.

The principal-agent problem is solved by DAOs through community governance. Stakeholders are not compelled to join a DAO and do so only after thoroughly comprehending the rules that govern it. They don’t have to rely on any agent operating on their behalf and may instead operate as part of a group with aligned incentives.

The interests of token holders are aligned since the nature of a DAO incentivizes them not to be bad. They will want to see the network flourish because they have a vested interest in it. Acting against it would be a betrayal of their own self-interest.

What was The DAO?

The DAO was a forerunner of current decentralised autonomous organisations. It was founded in 2016 and was intended to be an automated organisation that functioned as a type of venture capital fund.

Those who held DAO tokens might profit from the organisation’s investments by receiving dividends or benefiting from token price gain. The DAO was once seen as a groundbreaking idea, and it garnered $150 million in Ether (ETH), making it one of the largest crowdfunding endeavors of the time.

On April 30, 2016, Ethereum protocol engineer Christoph Jentzsch released open-source code for an Ethereum-based investment organisation, resulting in the creation of the DAO. Investors purchased DAO tokens by transferring Ether to its smart contracts.

Some developers raised worry a few days into the token sale that a glitch in The DAO’s smart contracts may allow unscrupulous actors to drain its cash. While a governance plan was being developed to address the flaw, an attacker exploited it and stole more than $60 million in ETH from The DAO’s wallet.

At the time, The DAO received around 14 per cent of all ETH in circulation. The attack dealt a serious blow to DAOs in general, as well as the one-year-old Ethereum network. As everyone tried to find out what to do, a discussion erupted among the Ethereum community. Initially, Vitalik Buterin, co-founder of Ethereum, advocated a soft fork that would ban the attacker’s address and prohibit them from transferring the cash.

The attacker, or someone impersonating them, then reacted to that proposal, stating that the money was gained in a “legitimate” manner in accordance with the smart contract’s terms. They stated that they were prepared to sue anyone who attempted to seize the money.

The hacker also promised to bribe ETH miners with part of the stolen monies in order to prevent a soft fork. In the ensuing argument, a hard fork was found to be the answer. That hard fork was executed in order to revert the Ethereum network’s history to before The DAO was hacked and reallocate the stolen cash to a smart contract that allowed investors to withdraw them. Those who opposed the move opposed the hard fork and backed an older version of the network known as Ethereum Classic (ETC).

Decentralised autonomous groups are not without flaws. They are a relatively new technology that has sparked considerable controversy because of remaining worries about their legality, security, and structure.

MIT Technology Review, for example, has stated that trusting people with critical financial choices is a terrible idea. While MIT revealed its opinions on DAOs in 2016, the organization does not appear to have changed its position – at least not publicly. The DAO attack also prompted security worries, as smart contract issues can be challenging incentivizes to rectify even after they are discovered.

DAOs can exist in various jurisdictions, and there is no legal structure in place to govern them. Any legal concerns that may occur will very certainly necessitate dealing with a plethora of regional laws in a complex court struggle.

For example, in July 2017, the United States Securities and Exchange Commission published a report determining that The DAO offered securities in the form of tokens on the Ethereum blockchain without authorisation, breaking elements of the country’s securities legislation.

Decentralised autonomous organisations have grown in popularity in recent years and are now completely integrated into several blockchain projects. DAOs, for example, are used in the decentralized finance (Defi) field to allow applications to become truly decentralized.

According to some, the Bitcoin (BTC) network is the first example of a DAO. Even though most network users have never met, the network scales by community consensus; it also lacks a centralized governance framework, forcing miners and nodes to indicate their support.

However, by today’s standards, Bitcoin is not considered a DAO. Dash would be the first real DAO by current standards, as the project features a governance structure that allows stakeholders to vote on the usage of its treasury.

More sophisticated DAOs, such as decentralised networks built on the Ethereum blockchain, are in charge of developing cryptocurrency-backed stable coins. In certain circumstances, the organisations that initially created these DAOs gradually relinquish control of the initiative, eventually becoming obsolete. Token holders can vote on governance proposals to recruit new contributors, add additional tokens as collateral for their currencies, or change other settings.

In 2020, a Defi lending system introduced its own governance token, which was issued via a liquidity mining process. Essentially, everybody who participated in the system would be rewarded with tokens. The approach has now been adopted and altered by other projects.

Now, there is a long list of DAOs. It has evolved into a distinct notion that has gained traction through time. Some initiatives are currently attempting to achieve total decentralisation via the DAO model, but it’s worth noting that they are just a few years old and have yet to meet their final aims and objectives.

DAOs, as internet-native organisations, have the ability to totally transform corporate governance. While the concept grows and the legal grey area in which they operate is addressed, an increasing number of organizations may adopt a DAO model to help manage parts of their operations.