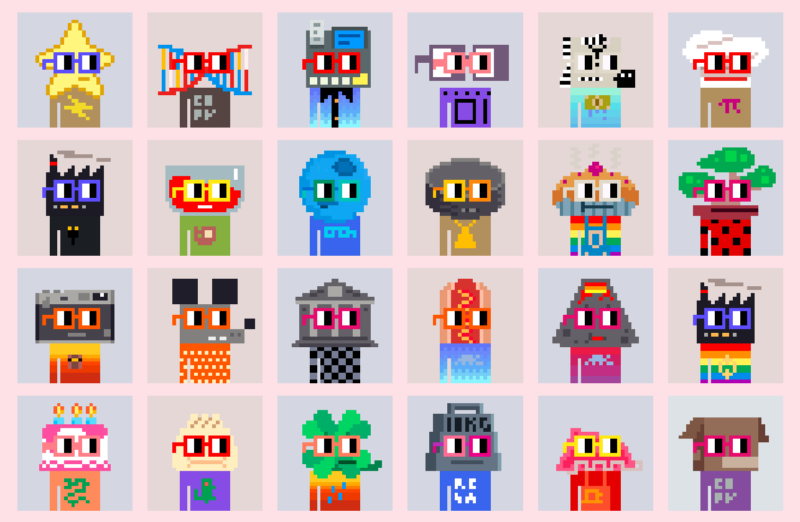 This post was originally released on August 29th and details the form and function of NounsDAO but it does not update the metrics in regards to how many Nouns there are and the associated metrics (average Noun price and treasury holdings).

What Do NounsDAO & John Cage Have In Common?

Time. Albeit, Nouns are more timeless.

In 1985, contemporary composer John Cage wrote a solo piano piece called ASLSP (As Slow as Possible) that can last anywhere from 20 to 70 minutes. In 1987, Cage adapted it for organ and in 2001 – 9 years after Cage’s passing, a small German church constructed a customized organ to perform this piece over the course of the next 639 years. 639 years was chosen because that was the age of the aforementioned church. The most recent notes, G# & E, were on September 5th, 2020, and the next scheduled note, G#, will occur on February 5th, 2022. The final note will occur on September 5th, 2640. A new Noun will also be auctioned off that day.

On August 8th 2021, NounsDAO auctioned off their first Noun.

On August 9th 2021, NounsDAO auctioned off their second Noun.

NounsDAO is an NFT project built on Ethereum that harnesses time as its sole method of distribution and decentralization. Each Noun is a generative 32×32 pixel NFT made up of people, places, and things. Their features are random and are controlled by a smart contract that automatically places the Noun in the winning bidders wallet while simultaneously creating a new Noun to be auctioned off exactly 24 hours later. 100% of the auction proceeds are deposited into the NounsDAO Treasury, which is governed by the aggregate of Noun NFT holders. At the time of writing, 24 Nouns control 3260.6022 Ethereum ($11,003,847.70 at a current ETH price of $3,374.79).

John Cage and NounsDAO are both manipulating our perception of time. When we ingest content, we expect there to be a beginning and an end. The end doesn’t necessarily have to be a resolution but it has to be there.

ASLSP dabbles with the concept of timelessness but the piece ultimately ends; the intention is to elongate expectation. NounsDAO, however, can potentially live forever.

I’m sure you know but I’ll just clarify:

DAOs have been all the rage recently. While their history is murky and their legal statuses are unclear, their potential is undeniable. Most active DAOs have been formed in the past two years and are generally based around a DeFi or NFT project.

Rather than have a centralized command center (C-Suite Executives), DAOs ideally enable all participants to have a substantial stake and say in the trajectory of a project.

I say ideally because doing this is easier said than done. To participate in the DAO of a project like Uniswap’s for example, you need to have a UNI token to vote on proposals. What if there was a VC funding round that allowed the VCs to have 51% of the UNI tokens before they were available for the public? That is definitely not the case with Uniswap but it can easily be the case with other projects. There are tokenomic structures and vesting schedules for advisors & investors to help avoid this but ultimately, you want the token’s distribution to be very wide.

NounsDAO is taking this framework and making one small modification. Instead of releasing all the tokens that control the DAO at once, they are releasing one Noun, every day, forever. Each day the NounsDAO Treasury ideally gets a bit more decentralized and the previous Noun owners’ say gets a bit more diluted.

I say ideally again because you never know – maybe Softbank is buying every single Noun for the first year. They would have much more than a consensus vote for at least another year, and that’s if they didn’t buy any more Nouns after their 365th. This would take an absurd amount of capital but it’s not impossible. It would also not be in Softbank’s best interest as they would just be controlling their own money and basically be creating another subsidiary of Softbank. I’m just extrapolating extreme but possible scenarios here.

These proposals can be anything from donating to charities (as seen in the picture above) to changing the amount of the Nouns supply required to submit proposals.

Think of everyone with a Noun as being on the Board of Directors of a company without a C-Suite.

To do everything that NounsDAO is doing, you need blockchain technology. Specifically, you need smart contracts. The smart contract that governs the auction process deposits all of the auction revenue into the above contract address which serves as the NounsDAO treasury. Here, you can see every single transaction that has been made to and from this contract. This is crypto, this is transparency.

Imagine if the US government was a DAO and there was a public ledger of how they spent the $2 Trillion in Afghanistan.

To simulate the Noun generating process, you can go on over to the Playground tab of the Nouns.wtf website. This tab isn’t too serious, it’s just meant to show you the generative nature of this infinite NFT set.

There are 2 primary settings, 16 sub-settings, 5 layers to each Noun, and each layer has dozens of options. Do the math on how many unique, non-fungible Nouns can be generated with this formula. Sure, it’s finite but the DAO can just submit a proposal to add one more trait and boom, you are set for a few years to decades.

Along with DAOs, fractionalizing NFTs is gaining traction lately too. It’s basically the same business model of Masterworks.io where you fractionalize expensive art pieces so anyone can buy it.

Does the fractionalization affect the voting power within the DAO? No. Fractional Nouns will be, for the time being, excluded from voting measures.

Given that this project is barely three weeks old, the community is still new and the DAO has not had much time to submit and enact proposals.

Although they have succeeded in doling out a total of 30 ETH ($101,243.70) to 6 different charities. You can actually see that the 30 ETH have been disbursed in the internal transactions tab on the NounsDAO Treasury address on Etherscan.

In the Virtuous Cycle page of their documentation, the Nounders proclaim the necessary comingling of the art, DAO, and treasury fund features. Each new piece of art brings in funds from the external crypto community; the funds are then governed by the DAO with the intention of investing them back into the crypto community.

Without one of those features, the model does not work.

While the treasury can do whatever it wants, it seems like the goal is to ensure the viability of the NounsDAO community. According to the Virtuous Cycle, the vision is to turn Nouns into an ‘internet wide event’ so projects revolving around Noun artwork and integrations would be prioritized.

The art is open source so anyone can build on top of it. Because of this, there have been a number of Noun derivative projects that are proudly presented within the NounsDAO documentation.

Below you can see the hand-drawn Improper Noun set. The artist is releasing a new one each day and can be connected with on Twitter here.

Here is a set of paintings designed by the AI process known as GAN. Connect with the Noun GAN Study artist here.

This last screenshot showing 20 more derivatives of Nouns was taken from the newly released website, nouns.com.

Nouns.com is a new nexus for the Noun community. Aside from the Discord, it may become the central hub for all Nouns. It contains features such as NounsChat, NounsDEX, NounsBlog, and everything you need to operate as a Noun in famed metaverse, CryptoVoxels.

Below is an snippet of what is being built at 1 Nouns Road in Crypto Voxels. Blockchain based digital worlds are still finding their place but I find it easy to imagine dozens of Nouns hanging out as their avatar in this context.

Not only is there all the above, but there is even a hot or not game based on Nouns called want2bnoun (12BNoun.eth).

Noun 2 / Pineapple Noun is currently tied for first 1st place with Noun 7 / Mirror Noun in case you were wondering.

No NounsDAO review would be complete without a reference to SharkDAO.

SharkDAO is the infamous sub-DAO within NounsDAO.

To be clear, NounsDAO is the primary DAO of the Nouns. It is made up only of people who own full Nouns. There can, however, be sub-DAOs within NounsDAO. SharkDAO is an example of a group of Nouns who decided to start their own sub-DAO. It consists of Nouns 2 (Pineapple Noun ?), 5, and 15. Anyone can join their Discord as they are looking for other Nouns, developers, designers, and more to build out their own community.

Every DAO is different but the ethos remains the same. Decentralized governance.

NounsDAO is my favorite NFT project. I like CryptoPunks for being one of the first generative NFT sets to really take off (next to CryptoKitties), but I feel their community infrastructure pales in comparison to NounsDAO.

They don’t have a treasury and what happens if 3AC buys 5,001 of the 10,000 CryptoPunks and after 250 years of healthy and technology-extended lives, Su Zhu and Adam Davies decide to become digitized versions of their favorite punk. Do the remaining 4,999 get inherited by their offspring or stay in a defunct wallet forever? Will it be put into a trust? Many variables.

NounsDAO will have a similar issue for the previously auctioned Nouns but there will be a new Noun every day decentralizing the governance. No one person or entity can control something forever like they can with finite amounts of time. Put me on the record as saying NounsDAO will become the most decentralized project of all time. Maybe not now, or soon, but eventually.

John Cage introduced time into his art in ways that were not initially understood (Checkout the fervor that surrounds his 4:33 piece). NounsDAO is doing the same. I don’t think people understand the power the Nouns are accumulating every single day.

After today, each Noun holder will represent a 1/25th or 4% say.

This is decentralization. This is NounsDAO.