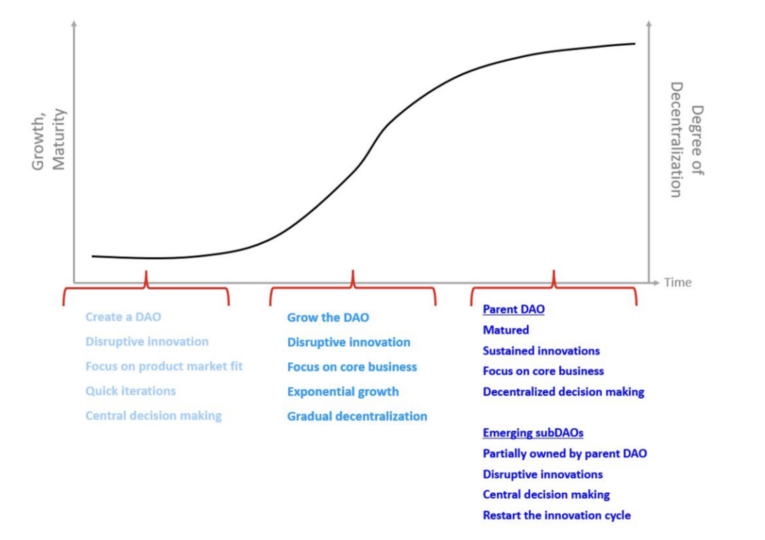 As DAOs evolve and grow as they attract more community members, subDAOs will emerge and start to play an increasingly important role in their evolution. subDAOs can potentially fulfill many functions and address different challenges that their parent DAOs may face: help realize economies of scale; expand an established brand to broader communities; function as a joint venture for two DAOs entering into a partnership. We will hypothesize in this essay that the most valuable contribution of subDAOs to their parent DAOs, however, will be that of institutionalizing disruptive innovation and carry forward the legacy of their parent DAOs once they reach their maturity.

Reaching the Top is Hard – Staying There is Harder

The history of business abounds with examples of how successful, outstanding and highly profitable companies that did everything ‘right’, had access to the latest technology and the best talent still lost their market leadership, or even failed entirely, as new unexpected competitors rose and took over the market.

This fate even overtook the largest and arguably most powerful corporation that ever existed in history, the Dutch Vereenigde Oost-Indische Compagnie – or VOC. The company existed for almost 200 years from its founding in 1602 until its end in 1799. The VOC played in a league of its own, even in today’s business terms, dwarfing even the major tech companies of our days (admittedly, part of the VOC valuation in the chart is inflated by the tulip mania). During those two centuries, the VOC sent almost a million people from Europe to Asia, commanded almost 5,000 ships, and enjoyed huge profits from its spice trade (it also engaged in the slave trade, and comported itself as a colonial power in Africa and Asia).

The charter of the company even empowered it to build forts, maintain armies, and conclude treaties with Asian rulers. The VOC was not just a trading company, but a powerful military-commercial complex. The founding of this company changed capitalism forever, and yet the VOC failed to transform itself, which ultimately led to its downfall. The reasons for its demise were manifold: a good deal of its profits was consumed by its bureaucratic machine, an increasingly complex nepotism among its employees, corruption, smuggling.

This observation of the demise of the most powerful corporation is not only anecdotal but has systematic underpinnings. Even more noteworthy, the trend of established and currently successful corporations to relative irrelevance is accelerating. A recent study by McKinsey illustrates this. While in the late 1970s, the organizations in the S&P 500 index had been on that list for an average of approximately 35 years, today, the average tenure is closer to 20 years, and is expected to decline further to only 12 years by 2027.  And this trend does not stop before the largest and most powerful corporations: this trend to higher turnover and replacement affects the top 10 companies in the index even more dramatically where their median age dropped from a staggering 85 years in 2000 to only 33 years in 2018. A behemoth company size is no guarantee against a waning to irrelevance.

The Growth Imperative and Disruptive Innovation

Many models were developed in business theory and case studies to explain this phenomenon. What many of them have in common is that disruptive innovation plays a central role in all of this.

Contrary to one’s instinct perhaps, innovation is to a certain extent predictable and controllable. In order to understand the role of disruption better, it is important to understand that there are two kinds of innovations: sustaining and disruptive. Sustaining innovation modifies something that already exists. Sustaining innovation improves given products for existing customers, such as by giving them better performance and better features. Disruptive innovation on the other hand changes the playing field dramatically, diminishes or even destroys the status quo. Disruptive innovation has the potential to be massively profitable, especially when it creates new markets and reaches people who previously weren’t customers. But disruptive innovation often fails, its outlook is more uncertain, and needs multiple attempts to be recognized as such.

Incumbent corporations have a comparative advantage in driving and implementing sustaining innovations: they have an existing large customer base, the resources and expertise. Startup companies have a comparative advantage in driving disruptive innovations. Successful startups started with targeting either low-end or new-market footholds and found niches in which large successful incumbents weren’t initially interested in. This niche then allows startups to create a base through various iterations providing minimal but tangible value to the customer. Once that base is created, each iteration is dramatically better than the last so that by the time the new product becomes interesting to the incumbent’s customers it is too late for the incumbent to keep up with the new entrant’s rate of improvement. Capabilities that guide a successful incumbent company through periods of sustained growth become disabilities during disruptive change.

This then begs the question of how business managers and entrepreneurs can sustainably create disruptive technology and take advantage of it for continued dominance of its incumbent corporation. In a nutshell, in order to achieve this goal, the incumbent corporation must create an autonomous organization and delegate all managerial power over decisions that are related to the new product or disruptive technology to that autonomous organization.

The nature and functioning of DAOs has been discussed elsewhere insightfully (see here and here). Like the evolutionary cycle of innovations, DAOs’ value will look like that of an S-curve. Initially DAOs will take time to experiment through many quick iterations in finding the right product market fit. After the base is created the value-add will increase exponentially with each iteration creating dramatically higher valuations than the last. At one point the most valuable improvements are realized and the value-add for each iteration becomes small again. What will differentiate DAOs from corporations and traditional businesses is the progressive decentralization that will occur in parallel to the innovative evolution. In contrast to corporations which typically become more bureaucratic and burdened with organizational overhead once they reach the stage of maturity, DAOs will aim to gradually decentralize in that process.

This decentralization will prove crucial for DAOs in the later stage of attaining maturity and will help them reinvent themselves and embark on a new cycle of innovation, embracing the next wave of disruptive innovations. The vehicle for that will most likely be subDAOs, which will spin off the parent DAOs. These subDAOs will focus on disruptive innovations whereas the parent DAOs will continue innovating but in a sustained form. subDAOs will have their own leaders, contributors, teams and compensation structure. Yet, subDAOs will have access to their parent DAOs’ resources and reputation, and the parent DAO will hold a considerable percentage (but not a majority) of subDAOs’ native tokens in its treasury.

Even though these strategies were clearly formulated in business theory for decades and well understood and embraced by many corporations and the business leaders, companies in the past and today continue to struggle to implement them and embrace disruptive technological change for their continued commercial success or even market dominance. We postulate that the implementation roadblocks for these strategies are predominantly a governance challenge.

Corporate Culture: Culture “can account for 20-30% of the differential in corporate performance when compared with ‘culturally unremarkable’ competitors”. But what makes a culture? Identifying those elements of a culture can be the first step to building a differentiated organization and to laying the foundation for its longevity.  While many companies find their values revolve around a few simple topics (employees, clients, professionalism, vision etc.), the originality of those values is less important than their authenticity. It is in this authenticity where a subDAO with its autonomous status has a clear governance advantage over a corporate subdivision: an entity that ultimately defines itself in fostering disruptive innovation is authentically different from a subdivision that is part of a mature corporation with its established sets of values and legacies.

Compensation Structure: Ownership has proven to be an effective tool forincentivizing talent to devote their skills to build businesses and perform highly. This is manifested in form of employee stock option plans in startup companies or performance fees in the asset management industry. The composition of fixed base salary and performance related compensation is often gradual and continuous, however, with the most senior members of an organization being compensated predominantly with a flexible, performance related pay. Overall, corporations have strict guidelines for structuring pay that also rigorously apply to corporate subdivisions, and therefore often leave little room and flexibility to strongly align employees’ incentives with the commercial success of the corporation. subDAOs, on the other hand, have a great advantage in this regard with their own Treasury and native tokens that allow align community members’ incentives with that of the organization.

Quality of Contributors: For corporate subdivisions, the main contributors will naturally emerge from the original organization. In corporate entities, the leaders of a new emerging subdivision are frequently chosen thanks to their ability to ‘navigate’ through the bureaucratic organization; they know the ‘right’ people, they speak the corporate language, and they have a strong skill set in managing ‘dotted’ and ‘solid’ lines. These qualities can prove very helpful in managing sustaining innovations but are not very conducive to disruptive innovations for which learning skills will be of utmost importance. subDAOs in contrast are more permeable with low barriers to entry where outsiders can easily join and experiment. It is likely to assume that subDAOs will be very attractive to contributors who have an ability to learn and the skills to tackle new problems and that such contributors will establish themselves organically as the leaders of this organization and eventually drive disruptive innovation.

Quick Experimentation: Despite organizational hierarchies, quick experimentations are feasible and often implemented as crucial business strategies in established corporations. To name one example out of many is Google, which started to establish early on an experimentation infrastructure to support running faster, better and more experiments. Anyone who ever experimented with deep learning models in AI most likely used their Tensorflow libraries that were developed in-house and were subsequently made available to the public. It’s an impressive testament to fast experimentation in the machine learning space. A look at today’s DAO landscape reveals a vibrancy of experimentation in addressing community growth and achieving their goals for their communities. Similarly, subDAOs with their low barriers to entry will likely inherit this culture and embrace quick experimentation.

Leverage: For a corporate subdivision, access to corporate resources comes quite naturally, as they are typically an integral part of the corporation and often led by insiders who ‘know the right people’. From the perspective of a DAO it is important to highlight that the parent DAO allows access to its subDAOs and supports them in their endeavor of disruptive innovation as their success are very closely tied to each other. It’s through disruptive innovation that the DAO will ultimately continue to succeed and dominate as an incumbent via its subDAOs.

The Most Valuable Companies of All Time (2017).

The Rise and Fall of the Largest Corporation in History (2013).

On DAOs and subDAOs