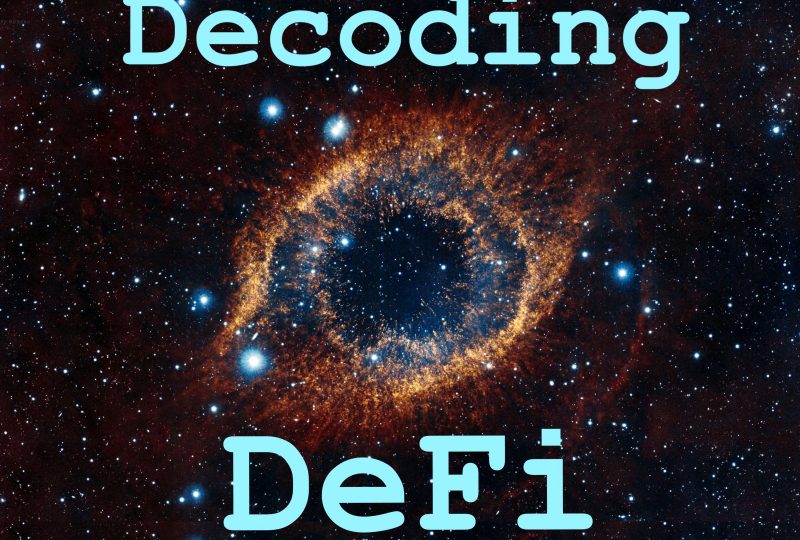 An article by anonymous anarchist.

Greetings to all my dear readers. I am writing this article in the hope of finding a needle in a haystack. Before boggling our minds with DeFi, let us first take a glimpse into our traditional trade-finance system.

About The Existing Centralised Finance System:

In the current scene, in order to make any financial transactions, the parties involved need to be dependent on a third-party authority (financial institutions like banks, stock markets, and insurance companies).

Flaws In The Current Trade-Fi System:

“ It is well enough that people of the nation do not understand the banking and monetary system, for if they did, I believe there would be a revolution before tomorrow morning “ – Henry Ford.

The trade finance system is completely based on trust and permission of the third party. As all financial institutions are run either by a single person or a group of people, there is always a possibility of bigotry. Due to the opaque nature of this system, most of this corruption goes unnoticed.

Loopholes can be easily used to launder money (TBML) ; finance terrorist organizations; develop, store and distribute WMD( weapons of mass destruction). Trade finance can also be used to conceal the illegal movement of funds so easily it is almost ridiculous. Collusion between parties where one party fakes the transaction of goods (phantom shipping) to launder money is not unheard of.

Though there are a number of United Nations, national and regional sanction regimes in action they can still be biased as these too are centralized ( backed by a powerful authority ) and can be manipulated at will.

Centralized financial services like banking, currency exchanges, loans, and insurance also have disturbing flaws in them which are not visible to the general public.

Let us now see how the banks are here to help us (sarcastic smile). Banks have the absolute power on deciding whether or not a person can have a bank account, to begin with. According to the banks, some people are not even qualified enough to have an account in their banks, let alone avail it’s services. Next, let’s consider someone who does have a bank account.

Most of the common population think that it is absolutely safe to keep their money in a savings bank account and that the banks will take care of their needs in the time of an emergency. With a lack of knowledge about the banking and monetary system, a common man is very happy that his amount of money is increasing as the bank is giving him an interest for his savings. But what he doesn’t know is that the interest he is receiving from the bank is much less than the current rate of inflation (which is slowly but surely increasing). That means the intrinsic value of his deposited money is decreasing with each passing year. He is better off spending the money now than he would be in the future as the purchasing power of his money will decrease. Like any other business institution, banks focus on generating a profit rather than charity. As difficult as it might be for some of you to believe this, this is the only way they can avoid bankruptcy.

Imagine this- person ‘A’ deposited an amount of 500 in some currency in his/her favorite bank. If the bank just holds the money, it would not be able to give ‘A’ even his/her meager interest let alone avoid bankruptcy. So what does the bank do?

It keeps a portion (usually 10%) of the deposits as liquidity assets and lends the remaining to borrowers as loans at much higher interest rates. This is called fractional reserve banking. The biggest problem with this system is that it is solely running on the hope that every last one of the depositors would not withdraw their funds at the same time.

Institutions that provide the service of foreign exchange charge their customers with hidden fees if the customer is not aware of it. With the onset of globalization and foreign trade skyrocketing, more and more companies face the risks of foreign exchange while trading globally. The companies solve this problem with the help of investors who guarantee a stable profit to the companies from their forex trades. But no such hero exists in the lives of the common citizens. We have no other option but to tackle these risks head-on. One of the current examples of foreign exchange bigotry is the case of Gaza Aid. Due to the foreign exchange policies set by Israel, almost 45% of the funds sent to Gaza is eaten by Israel. So the aid that is being sent by people from all over the world to solve the problems of Gaza, is actually funding the problem itself.

Even the thought of me trying to explain to you the frauds of insurance companies makes me want to slam my laptop down and go live with the yetis in the Himalayas.

All these issues can be so easily solved if we move on from the ancient trade-finance system followed by our great-grandfathers and evolve into a completely trustless, permissionless, and decentralized financial system.

DeFi : Saviour of the Common Citizen :-

DeFi or Decentralized Finance is a system that doesn’t involve a supreme third party i.e. it is decentralized. DeFi uses blockchain technologies to create a transparent, trustless and permissionless financial system.

In DeFi, there is no human interference hence eliminating any chance of bigotry altogether. Rather than a single person or a group of people taking the decisions, all transactions are carried out by smart contracts ( computer codes written to carry out specific functions ). Once a smart contract is deployed no one has any control over it thus making it absolutely immutable. More on this later.

The first blockchain was that of Bitcoin made by a person/s named Satoshi Nakamoto ( my deepest love to you Satoshi if you happen to come across this article somehow ). The Bitcoin blockchain only allowed simple monetary transactions on their network with complete transparency. The Ethereum blockchain which succeeded Bitcoin introduced smart contracts and opened up portals to infinite dimensions. It hence provided the first infrastructure for the decentralized financial system.

Ethereum provides a platform where people can build their own decentralized apps or Dapps ( which is an amalgamation of different smart contracts built one on top of the other like legos ) to carry out functions according to their needs thus nullifying the need of any centralized financial institution whatsoever.

With a decentralized infrastructure in place, we will now need a currency to put the system in motion. Unlike Bitcoin, though Ether ( cryptocurrency of the Ethereum network) is compatible with the Ethereum blockchain, it is volatile, meaning its value fluctuates from time to time. This is where stable coins come to the rescue.

Stable coins are cryptocurrencies whose value is pegged to a physical asset in the real world, like the US dollar which is globally considered to be the most stable currency ( hopefully not for long ). But a stable coin can only be considered truly decentralized if it is not backed by any fiat money reserves. Enter our next superhero, DAI.

Unlike other stable coins, DAI was first backed by cryptocurrency collaterals ( Ether ) hence making it truly decentralized. 1 DAI is pegged to 1 US Dollar. But the volatility of Ether forced MakerDAO to back the DAI with USDC ( which is backed by US Dollar ) hence making the use of DAI as a decentralized stable coin pointless. The limitations of crypto-backed stable coins are eradicated by algorithmic stable coins like Terra UST. Since the blockchain is completely transparent, companies are constantly coming up with innovative stable coins to overcome the limitations of their competitors. Once a less volatile cryptocurrency has been set, smart contracts can now be used to avail more DeFi services like banking, loans and insurance.

Decentralized Exchanges or DEXes help carry out peer-to-peer cryptocurrency transactions in a quick, secure and cheap way without any rent-seeking middlemen. Unlike traditional exchange fees, gas fees to carry out exchanges in DeFi is absolutely minimal. The transactions can be made anonymously, without any account, sign up or identify verification, and are open for all.

In the traditional finance system, the third party in any money market runs at a high risk of mishandling funds, corruption and other forms of trickery. Decentralized money markets act as a link between lenders and borrowers without any intermediary third parties like banks. They are run by some on-chain immutable codes which are upgraded and managed by a global community of stakeholders thus dividing the power and improving the points of failure. When Defi money markets were first introduced, they used a peer-to-peer model to connect their users. But variable supply and demand of funds was a major problem thus making it inefficient and time-consuming. The crypto visionaries solved this by introducing a peer-to-smart contract model. As no central authority holds any funds, the users have the ultimate right over their funds. Apart from this, the transparency of DeFi assures that the funds can not be misused. Traditional financial institutions like banks work in an undercollateralized manner hence prefer giving loans to the rich to avoid any risks of loss.  Being completely permissionless, DeFi marketplaces allow anyone with a meagre internet connection to lend and borrow money. As opposed to the grey-haired TradeFi which works in an undercollateralized and fractional reserve manner, our young and dynamic DeFi overcollateralizes the funds thus offering a much higher degree of security to the lenders. AAVE and Compound are two of the most popular DeFi money markets currently being used. New and innovative improvements ( like open composability )  in DeFi are being made each day giving birth to unimaginable use case scenarios and financial products.

I personally have faced the problem of declined insurance claims during one of the lowest times of my life, so I have nothing but the strongest emotion of absolute hatred against centralized insurance institutions. I remind you once again that traditional financial institutions are not charities but businesses trying to make a profit. The operational cost of providing some of the best insurance is so high that paying costly premiums just to get these insurances becomes meaningless for an average-earning citizen. Like a superhuman from planet Krypton flattering his red cape, DeFi insurance throttles to aid the needy citizens of planet Earth. By replacing the shady insurance companies in the middle, smart contracts create a direct decentralized link between the insured and the insurer. Smart contracts use oracles to interact with the real world and gather information required to compute the essential data in any insurance. Besides insuring against mishaps in the crypto world , DeFi insurances are now being used against real-life misfortunes as well. Nexus Mutual is one of the leading DeFi insurance platforms today. Developers in companies like Chainlink are upgrading each day to make the oracles a more reliable and decentralized DeFi tool.

Final words from the writer:

Like a footprint on wet concrete, I hope to leave a lasting impression on the consciousness of my readers. I hope that from today on, every time you indulge yourselves with any TradeFi institution and see a flaw, you will look up how the DeFi is whooping these problems and keep me, your humble servant in your prayers and good wishes. The revolution has already begun and now is your time to ‘take the power back’ { epic bass line by Tim Commerford starts playing in the background 😉 }.