Ideamarket: How Web3 Can Fix Our Information Ecology 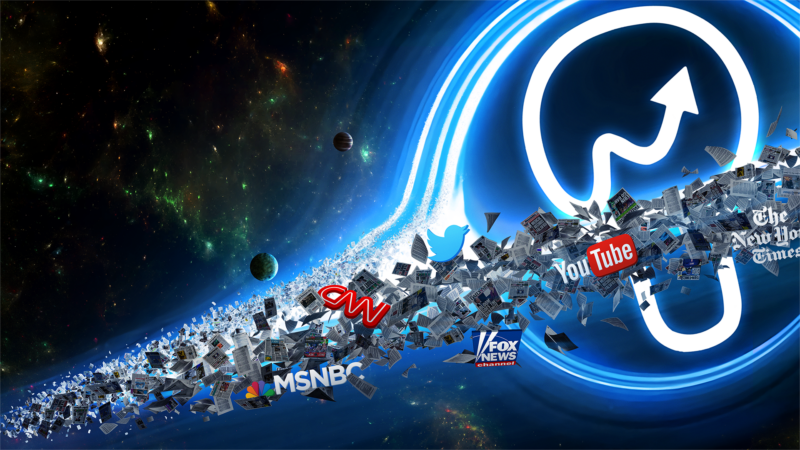 For normies, crypto is full of hyperbolic nonsense.

“Crypto will solve climate change,” “DeFi will replace traditional finance and create a more inclusive financial system,” and “DAOs will create Network States that will compete with nation-states.”

While CT exaggerates a lot of things, there is some truth to those claims. I’ll demonstrate by adding another hyperbolic claim to the list.

In order to act, humans need to understand what is going on. However, there are limitations to how much a single person can see. As a result, humans must rely on others to figure out what’s going on. During the pandemic, for example, citizens relied on government agencies to determine what was going on and how to respond. And government agencies, in turn, rely on others. This network is the information ecology in which humans live.

The proper functioning of this information ecology is dependent on trust. Unless we have trust, we won’t be able to know what’s going on on the other side of the world. As a result, a global pandemic has occurred. What if there was a high level of trust and information could be freely exchanged? We might have been able to resist the pandemic.

Traditionally, the public’s perception needs were always mediated by some central authority. In the past, kings decided what was true. Now, media corporations decide what is true. However, with the advent of the internet, this model is under attack. Now, a sizable portion of the population trusts Joe Rogan more than CNN.

This is where Ideamarket.io enters the picture. They place all the nodes in our information ecology on-chain and discover its credibility score. Now, people have an alternative source to make sense of the world. They don’t have to blindly trust corporate media.

Ideamarket.io has an opinionated perspective on epistemology. And this perspective directly influences the way dApp is structured. Essentially, they believe that knowledge is fundamentally uncertain. This is a well-established position in philosophy and cognitive science.

Apart from uncertainty, knowledge also contains a significant subjective component. For someone to consider something to be factually true, he can’t just rely on his objective observation. He’ll also have to ‘trust’ other people with what they say, as well as omit a lot of contexts. Republicans and Democrats have radically different belief systems in part because they ‘trust’ entirely different news sources. Context-omission is a big deal as well. Because we can create alternate facts by framing the context differently. See “Wittgenstein’s Revenge” by Mike Elias for more on this.

When framed this way, ‘truth’ sounds a lot more ephemeral and fluffy than the mainstream perception. We can’t say ‘this is true’ and ‘that is false’ in a black and white manner. Still, as a society, we need to reach some sort of consensus on the credibility of ideas. We need some way of quantifying the credibility of information without losing the nuances beneath the truth claim.

If we can create a marketplace for ideas, we can use the prices of ideas as a measure of their credibility. The ideamarket.io measures the credibility of ideas in the same way that the stock market measures the ‘value’ of a company. I understand that this all sounds strange. But hold on.

How Does It Work?

Ideamarket.io is a dApp on top of Arbitrum. It purports to create the literal marketplace of ideas. You can list any URL on ideamarket.io. It can be Vice’s Website, Bankless substack, or Balaji’s Twitter profile. As long as it is a URL, you can list it in ideamarket.io.

Once a URL is listed, Ideamarket will create a market for it. Tokens for that URL can be purchased by anyone. A bonding curve determines the token’s price. The lower the amount of money invested in a URL, the lower the token price. The higher the amount of money invested in the URL, the higher the token price. This incentivizes market participants to seek out information that is undervalued in relation to its credibility and to sell information that is overvalued.

The invested money will be given to lending protocols, and the URL owner will be able to claim the interest earned from these. Balaji, for example, can claim interest on money invested in his token. This is a good incentive for thinkers to produce high-quality work. Journalists will no longer have to rely on corporate media.

How Will It Fix The Information Ecology?

This has major implications. Assume you’re reading Balaji’s January Twitter warning about Covid. When you look at the price on ideamarket.io, the thread isn’t even listed. You immediately list it and purchase a bunch of tokens. More people need to see the thread and recognize that the token is severely undervalued in order for the price of the token to rise. You immediately begin sharing the thread, explaining why the warnings should be taken seriously and asking people to purchase the tokens. As more people become aware of the problem, they begin purchasing tokens and sharing the thread. As a result, the thread’s price will skyrocket.

On the other side, NYT will publish their piece saying that tech bros are being paranoid and everything is fine. NYT believers will list their articles and put their money where their mouth is. But now, they’ll have to actually read through the article and make sure it is credible. Otherwise, they’ll lose their money.

Before making a policy decision, government agencies can now consider the idea market price of both articles. Imagine what might have happened if government agencies had taken Balaji seriously. At the very least, the USA would have had a two-month head start on the Covid.

Even if authorities ignore it, it’ll at least reduce the idea market price of NYT itself, reducing its credibility drastically. Now, when NYT publishes another article, they will not have the same level of credibility as they had before. People will also have a much more solid ground to question govt. authorities.

As the above counter-factual illustrated, Ideamarket.io will be a mechanism to crowdsource a perpetual audit of truth claims made by everyone.

To be clear, ideamarket.io isn’t directly measuring the ‘truthfulness’ of ideas. Ideas in the abstract are only measured indirectly. What ideamarket.io measures are something like ‘trustworthiness’ & ‘attention-worthiness’. Both are scarce natural resources. Markets are the best mechanism to allocate scarce natural resources between parties with conflicting interests. The purpose of the “literal marketplace of ideas” is to create a decentralized system for the risk-managed allocation of trust.

As history happens and highly-ranked people are proven wrong (or liars), the market will correct. The public will trust their information less. Since the largest profit opportunities will be found in discovering extremely trustworthy voices early, market participants will seek out trustworthy voices to update the list of ‘thought leaders.

Wouldn’t it be just a popularity contest? In a sense, yes. But, popularity will not be determined by what dress you wear or how cool you look. Instead, it’ll be determined by how ‘trustworthy’ you are. Large chunks of the population will consider Joe Rogan as more trustworthy than CNN. And they’ll put their money on Joe. That’s the point of the whole system. To replace corporate media as the fiat arbiter of truth with a decentralized alternative through which people can signal which information is credible.

Will the market give incorrect signals? Yes, they will. Occasionally, it will price untrustworthy people really highly. But that doesn’t mean we should throw away the whole system. Nobody will say that we should abolish the stock market just because there was a Dotcom bubble. Compared to the benefits of the market, that is a small price to pay.

The innovation of Ideamarket.io is in directing the attention of millions of people to our information ecology and asking them to price the credibility of each node.

Wouldn’t rich people and big media companies be able to artificially boost their credit scores? In the short term, they might be able to do that. Ideamarket.io, on the other hand, is working on tools that can detect when something is being manipulated. For example, they’re planning to collaborate with a decentralized identity tool (like BrightID) to check if deposits in a token are coming from multiple people or from a single person.

In any case, it won’t be sustainable in the long term. Independent investors will recognize that manipulated tokens are being over-priced and sell those off, driving down the price. Furthermore, as the ideamarket.io grows in TVL, it’ll be increasingly difficult to move the prices.

I know there’ll be more questions and doubts. But, It is beyond the scope of this article to discuss every single one of them. Instead, let’s try being skeptical of our current system and contrast it with ideamarket.io.

What is the status quo? And is it any better? On one side, there’s intense narrative warfare raging on social media. Vested interests are actively trying to hijack the sensemaking capacities of people. The business model of corporate media is failing them. They are cutting corners and sacrificing quality. Citizen journalists are looking more competent than them.

Nonetheless, they are clinging to the authority inherited from the era in which they were (supposedly) competent. Only they’re considered as the “real” news. In the status quo, corporate media is the arbiter of truth.

If Ideamarket replaces corporate media as the arbiter of credibility, the problems it creates will be preferable to the problems we face today. Obviously, millions of people checking the credibility of information is a better system than 10 suits checking if something is credible.

Ideamarket.io creates radical accountability for both information producers and consumers. There will be equal consideration of all opinions. No opinion will be excluded just because it’s against the interests of someone powerful. Most importantly, it incentivizes intellectual honesty among all stakeholders.

To summarize, our information ecology is degrading rapidly. Traditional solutions, such as corporate media, are ineffective, if not counter-productive. Ideamarket.io offers a potential solution by acting as a credibility layer for the internet.

If ideamarket.io lives up to its promises, it will do more than just improve our sensemaking. It will have a variety of second-order effects such as decreasing political tensions, increasing trust in (new forms of?) institutions, among other things. And in turn, these will have third-order effects.

And that is the promise of web3. Web3 genuinely has the potential to make our world better by orders of magnitude.