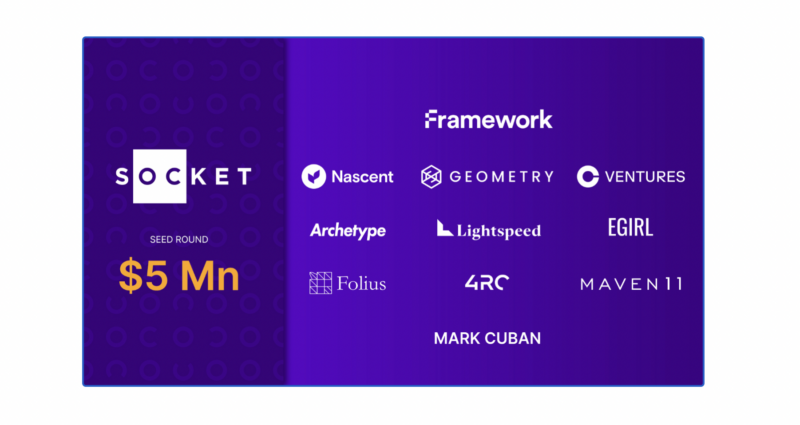 March 10, 2022 –  Socket (previously Movr Network) has announced a $5mn seed round, led by Framework Ventures, an investment adviser with significant experience in decentralized finance (DeFi) space, and with participation from Coinbase Ventures, Lightspeed, eGirl Capital, Nascent, Geometry, and entrepreneur Mark Cuban, among others. The round will support Socket’s aim to unify the multichain ecosystem by connecting all chains and enabling seamless asset and data transfers between them.

Today, developers build protocol logic designed for one specific chain, yet deploy it across all chains throughout the ecosystem. This current development process leads to multiple, siloed application instances causing inefficiencies such as liquidity fragmentation and subpar user experiences.

Socket, which acts as a metalayer that connects all chains, enables unified, multichain applications with shared liquidity and state across chains. Developers can plug into Socket’s metalayer via easy to use APIs and build applications with interoperability as a core aspect of protocol logic.

Socket currently supports asset transfers across chains via its liquidity layer, which aggregates all asset bridges into a single metabridge. Web3 discovery and collaboration app, Zapper; smart Web3 wallet, Zerion, and other apps are already seeing great success in utilizing Socket to offer multichain bridging for their growing user bases. Socket plans to release support for data transfers soon which will allow developers to build use cases like unified governance, chain-agnostic lending and borrowing, NFT bridging, and multi-chain yield optimization.

“Cross-chain composability opens the door for broader adoption of Web3 and DeFi. Currently, users must knowingly engage with different instances of applications across chains, for example, Aave on Polygon or Aave on Ethereum,” said Vaibhav Chellani, Co-founder at Socket. “With Socket, users no longer need to pick and choose which chain to interact with, as our technology unites application liquidity and state across all chain instances, allowing users to focus on the application, in this case, Aave, itself.”

“Over the recent months, the industry has experienced a massive shift in DeFi innovation to focus on building a multi-chain future for the Web3 ecosystem,” said Michael Anderson, co-founder of Framework Ventures. “Socket’s mission, in accompaniment with its partner applications, will greatly enhance interoperability within the DeFi space and hopefully draw a larger audience into the burgeoning world of decentralization and Web3.”

Socket aims to unify the multichain ecosystem by connecting all chains and enabling seamless asset and data transfers between them. It allows developers to build with interoperability as a core part of protocol logic, empowering them to build unified, multichain apps. Socket currently supports moving assets across chains and powers multichain bridges in apps like Bungee, Zapper, and Zerion. To learn more, visit: socket.tech.

Framework is a team of technologists, researchers and investors who buy assets of, who build for, and who participate in open crypto networks. At its core, Framework is a technology company, building products and services to support the open blockchain networks that they invest in. Through its registered investment adviser, Framework Ventures Management LLC (“Framework Ventures”), the firm has backed dozens of notable companies in the decentralized finance and Web3 spaces. To learn more visit: framework.ventures.