What is P2E? Safety and famous games explained! 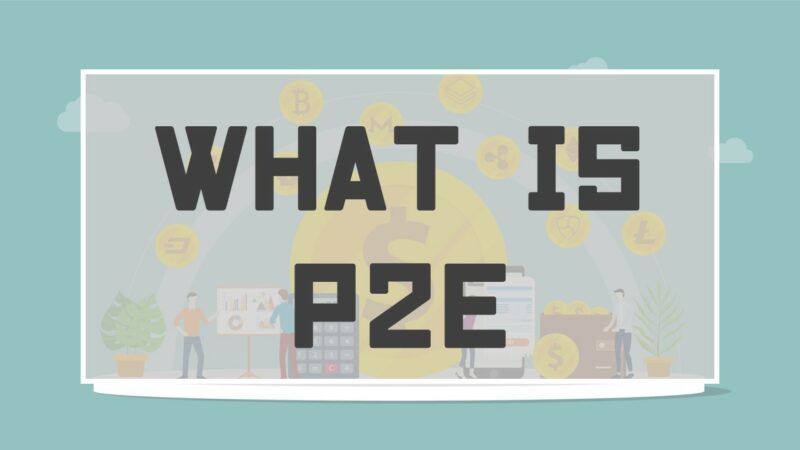 What is P2E (Play to Earn)?
What is the mechanism of making money from games in the first place?
Is P2E safe? Should I be careful of scams?

In this article, I will discuss the following three topics.

??What is P2E (Play to Earn)
??The two biggest P2E players, AXIE INFINITIY and Gala Games
??4 things to check to avoid being cheated by scam P2E projects

P2E is an acronym for “Play to Earn”, which means “earning through gameplay”.

It’s a way for gamers to be rewarded financially.

In the traditional gaming market, no matter how much users charged, they were not rewarded financially unless they became professional gamers or streamers. However, with the advent of P2E, all gamers can now be financially rewarded.

If you read THE BLOCK’s “Weekly Sales Gaming NFTs” data above, you will see that at its peak, more than 760,000 (week of January 31, 2021) game NFTs were bought and sold. To put this number into perspective, the population of Tokyo is 1.4 million, so as many as half of that number of people own game NFTs.

Now that P2E and NFT have excited the masses, there is a technological innovation that has made this possible. It is the “blockchain technology”.

The games that can be played with P2E are deeply related to blockchain and are called “Blockchain Games” (BCG).

Differences between traditional games and BCG

Traditional games are structured so that only the game company makes money. Users are not allowed to sell the characters and items they have acquired by paying for them. Even if you get a rare character, you can’t sell it to someone else. The model is as shown in the figure below.

Blockchain games, on the other hand, allow users to buy and sell data and earn virtual currency through gameplay. Users can sell “NFTs” such as characters and items, and they can also get “tokens” (often cryptocurrency) through gameplay.

How can the game company and the user each earn revenue from P2E? Here we will introduce two P2E models.

The first is the “commission model” shown below. The game company’s revenue is “a portion of the commission generated from “on-chain activities” such as NFT trading between users. A part of the so-called “gas price” is the revenue of the game company.

The second is the “sales model” shown in the figure below. The game company’s revenue is the amount of NFTs sold to users.

As specific projects, AXIE INFINITY is strongly based on the former model, while Gala Games is based on the latter model.

Anyway, the above two models are not independent, and most blockchain games are a mix of both models.

The above two BCGs are the two biggest P2E games.

?The original BCG project
?The world’s largest trading volume in the BCG space
?Aiming for layer 1 domination of BCG with its own chain “Ronin”.

In order to play the game, players need to purchase three NFTs called AXIE, and until early 2021, the purchase of NFTs was a barrier to entry and the game was slow to grow.

However, with the introduction of a “scholarship system” that allows users to rent NFTs to play the game, the project exploded in growth starting in late 2021.

This growth was supported mainly by players from low-income countries.

Especially in the Philippines, where the average income is low, it has reached an unthinkable state where people can earn more playing AXIE INFINITY than being employed by a regular company. This is captured in a documentary on Youtube.

The documentary video of AXIE INFINITY going viral in the Philippines ??

AXIE INFINITY is famous for being the world’s first BCG project that successfully completed P2E, and as of February 21, 2021, it still maintains its steadfast position as the world’s No. 1 BCG trading volume ranking. As of February 21, 2021, BCG’s trading volume remains unchanged at number one in the world, with $14.31M in 24 hours, even with the overall virtual currency market softening.

Aiming for BCG’s Layer 1 supremacy with its own chain, Ronin

AXIE INFINITY used to develop Dapps using both its own chain “Ronin” and the Ethereum blockchain to attract users in the Ethereum economy.

However, you cannot play the game using AXIE NFT, which currently resides on the Ethereum blockchain. It has been fully migrated to the Ronin blockchain.

They are also trying to develop games other than AXIE INFINITY on the Ronin blockchain, as evidenced by their official announcement on January 20, 2021, of a program to help developers with the “Axie Infinity Builders Program!“.

Which came first: the chicken or the egg? I think it goes both ways. In other words, where there is content, people will gather, and where people gather, more content will gather. If games other than AXIE INFINITY are developed, there will be more people and more growth.

If they can increase content and users while maintaining the proper economic balance of $RON, $SLP, and $AXS, the Ronin blockchain could become the largest layer 1 in the BCG world.

Gala Games is a BCG developer and publisher with the ideal of “returning all rights to the gamer”.

In the past, no matter how much money or time a player spent on a game, the payback in the real world was limited. Gala Games is trying to revolutionize the gaming industry by giving players back all the rights and rewards for their gameplay.

They are using BCG as a vehicle to do so.

Publisher and developer of BCG

Gala Games is a developer that develops its own games and a publisher that releases games developed by other game companies. 9 games have been announced as of February 21, 2021.

With Gala Games overseeing all the games, the biggest advantage is that a single NFT can be used for multiple games. In fact, the NFT ”Mirandus VOX”, dropped on December 6, 2021, will be available for two games: Town Star and Mirandus. In addition, in the future, this NFT can be used in the metaverse space “Voxverse”.

Gala Games is in the process of developing its own chain, GYRI (formerly Gala Chain). Currently, Gala Games is utilizing the Ethereum blockchain. This move to a proprietary chain in the future was originally made known to users.

As a prelude to the transition, the company has announced that it will be rolling out a test network, GYRI, on February 19, 2021.

Overview of the testnet “GYRI” deployment

?All members of the community can participate in the testnet.
?Play games in the prototype stage on the testnet
?P2E token “TEST” can be obtained (cannot be sold or transferred).

The plan seems to be to get feedback from players on the testnet, and then proceed with the full-scale operation.

By moving to their own chain, players will be able to reduce gas costs, increase on-chain processing speed, and so on.

AXIE INFINITY’s proprietary chain “Ronin” is a style that welcomes all developers, including individual developers.

Gala Games, on the other hand, has a style of hiring elite developers who have been rigorously screened. As of now, all of them are corporations.

While both are similar in the context of BCG’s Layer 1, they have their own unique operational policies, and it will be very interesting to see which one or both will succeed in the future.

Unfortunately, the field of P2E is far from secure.

This is because it is still a developing field and there are some scam-like projects.

So here are some minimum things to check in order to avoid being fooled by scam projects.

??Check whether the NFT sale is before or after the game release.
??Check the development team.
??Check the number of users and transaction volume.
??Understand the ecosystem of the project.

??Check whether the NFT sale is before or after the game release.

Firstly, make sure to check whether the BCG that is selling NFTs has released the game or not.

If the game has not been released yet, I basically do not recommend making an NFT purchase. If lag pulls occur or the quality of the game is poor, the NFT may lose its value.

While there are examples such as Star Atlas, Mirandus, and others that have succeeded in selling NFTs on a large scale due to high expectations even before the game is released, there is no guarantee that all projects will do well.

While most of the attention is focused on successful projects, it is obvious that there are many more projects that have failed. If you buy NFTs without any regard, there is a high possibility that the value will be zero.

Secondly, be sure to check out BCG’s development team.

Dangerous cases are the following.

?No real name.
?No photo of the applicant.
?No background information.

A good project has all of the above, and social networking links such as LinkedIn, Twitter, Facebook, etc., so that you can get evidence of their activities.

Would you want to spend thousands of dollars shopping from “someone whose name, face, and background you don’t know”? You wouldn’t want to.

AXIE INFINITY and Gala Games are very positive in this sense.

Check the number of users and transaction volume.

Third, be sure to check out BCG’s user base and trading volume.

The number of users is a measure of the popularity of the game, whether it is actually being used by players or not. The trading volume also confirms that NFTs are actually being bought and sold.

You can find all kinds of data on the project at data sites such as DappRadar, token terminal, THE BLOCK, and Defi Llama. These are all free sites, so take advantage of them.

Understand the ecosystem of the project.

Fourth, make sure you understand the BCG ecosystem. Specifically, these are

??Blockchain
??Tokens issued and their roles
??Market capitalization and maximum supply of tokens

The first step is to identify the blockchain. Just understanding which blockchain projects are using will give you an idea of the number of potential users, gas prices, transaction speeds, etc.

??Tokens issued and their roles

Next, learn about the tokens that will be issued and their roles; many BCGs have dual or even more tokens.

For example, AXIE INFINITY has two tokens, “AXS” and “SLP”, the former is a governance token and the latter is a currency that can be earned in-game. Recently, a new token called “RON” has also been added, which is the gas money for its own chain.

In addition, you should check the market capitalization and maximum supply of tokens. You have to understand that projects with a market cap of a few million dollars or even less are very small and therefore risky. If there is no limit to the maximum supply, then you have to consider how it will be burned and how the price will not collapse.

For example, AXIE INFINITY’s “SLP” has a market cap of 12 billion yen and a maximum supply limit of infinite (CoinMarketCap’s Feb. 21, 2021 data). Note that the market cap is not small, but the maximum supply is infinite. You need to learn in-depth how economic balance is maintained. If you find it risky, it means you should not invest.

P2E is an interesting world, but it is dangerous to invest without understanding it!

In principle, cryptocurrency is a world of self-responsibility. It can be dangerous, but that is the appeal of cryptocurrency and the reason we can make money playing the game.

If there is only one rule for winning in this world, it would be to do your own research and invest at your own risk. You will surely enjoy this world.

Mapping the Landscape of Web3...

(A Look Into Portfolios, Competitive Dynamics, Post-Investment Support, Fundraising Activity, and more.) Part I:  Overview The web3 venture capital landscape has morphed into a complex