Sweatcoin has been gaining lots of traction ever since it announced its web3 product. I discovered the app three weeks ago. Here is my extensive review of the app in its current existence and an overview of the upcoming sweat token economy.

Sweatcoin is an app that pays you in virtual currency to walk (Move-to Earn). It is currently available on your smartphone (Android or iPhone) and Apple Watch with over 90 million total users.

The company SweatCo Ltd, a company founded by Oleg Fomenko, Anton Derlyatka, Danil Perushev and Egor Khmelev in 2014, developed it.

In its current iteration, it takes in your physical activity data and maybe GPS (contradicting information available) data on a daily basis and gives out Sweatcoins.

Once you download the app from the respective app store, sign up using either your Google account or phone number, give it a few permissions (physical activity and Google Fit) and voilà, you are all set to go.

Unfortunately, it hasn’t been issuing me sweatcoins for my steps. I have made sure that the app has no background restrictions but it’s still not functional. My phone is recognized as a smartwatch on the app might be the issue.

It has been working just fine for people around me though. But, how prevalent is this problem? Well, I visited a sub-reddit for Sweatcoin with over 12,000 members (unofficial Sub-reddit) and I came across a few posts highlighting the same issue. I haven’t tried reaching out to customer support yet but honestly, I expect it to work for all phones from the get-go.

The app has four tabs:

You can check your Sweatcoin balance, number of steps you have walked on that day, invite a friend, enroll for the 20 minute daily 2X boost and earn up to 3 daily rewards.

Now coming to the conversion rate for your steps: For every 1000 verified (more on the verification process later) steps, it converts to 1 Sweatcoin. A 5% commission fee exists, hence you receive 0.95 Sweatcoin. Here is their justification for the commission fee: 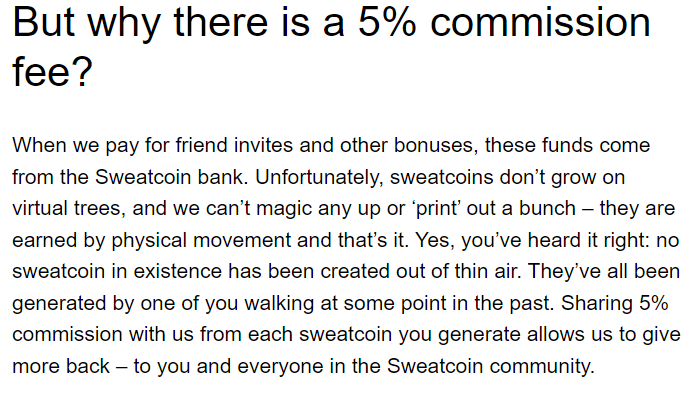 I quite like the sustainable concept of the commission fee and minting only though physical movement, very unlike a generic Web2 company back in 2018.

You get rewarded up to 10 Sweatcoins/day on the free tier, 2x sweatcoins for the same number of steps on the Premium tier up to 95 Sweatcoins (50000 steps). The premium subscription costs INR 3050 (~$40)/year.

When you invite someone to download and use the app, you earn 5 Sweatcoins. It’s a hit and miss on the first try. You need to request the referee to click on the invitation link again after downloading the app to receive the five Sweatcoins.

Regarding the 2X boost, you get an opportunity to earn double the Sweatcoins that you normally would for 20 minutes every day. Since I personally couldn’t verify this, I asked my friends to test the 2X Boost. Out of the 4 days they tried the feature, it worked 3 out of 4 days.

There are three daily rewards you can receive. Each can give you anything between 0 and 1000 Sweatcoins. You need to watch an ad to receive these rewards. The ads that I came across redirects you to the Play Store, which is slightly annoying.

The marketplace is where you can claim your Sweatcoins. There are four options:

You get more choices if you opt for a country like the USA.

I went through the last 15 products that were up for auction and here are some stats:

Average price of a product listed = $406

So you most likely have to pool in your Sweatcoins to even place a bid (You can send and receive Sweatcoins via the app).

This tab is for registering for the Sweat tokens and to check out your earning summary.

Participate in various challenges to stand a chance to win prizes or donate your Sweatcoins for a charitable cause. You can also follow your friends and you will be able to see their steps.

A trademarked algorithm is used to filter out the shakes and bumps and they claim they can recognise cheating by looking at the patterns of the movement.

As per their analysis, an average user converts 65% of the total steps registered by the phone into Sweatcoins.

Sweat token will be the web3/crypto token that will co-exist with the web2 token, Sweatcoin. I was curious to know what’s the reasoning behind the co-existence. Luckily I caught Henry Child, the Chief Crypto Officer of the Sweat Economy in an AMA (Ask Me Anything) session. His answer was they prefer a bigger TAM (Total Addressable Market) for the product. The team understands they won’t be able to onboard everybody on the crypto train from the get go and they don’t want anyone to miss out on the product. While it makes sense, I hope the team will work on making their web3 offering just as easy to manage so that an average Joe doesn’t need to know the nitty gritty of crypto but can reek in the benefits of an open currency.

Let’s see the differences between both the offerings:

The SWEAT token is being built on the NEAR Protocol, a leading Layer-1 blockchain.

You need to opt-in to claim 1 SWEAT for every Sweatcoin in their wallet, without burning your Sweatcoins. The Token Generation Event (TGE) will occur in Q3 2022. At TGE, the Sweat Foundation will mint enough SWEAT to match the sweatcoins of users who opted-in.

As of 2nd June 2022, over 8 million users have created a non-custodial Sweat wallet.

To put it simply:

It won’t be a ‘fair launch’ by any stretch of the imagination, but hey they aren’t claiming to be one. There isn’t a cap on the Sweat token supply.

After TGE, the only way to mint new SWEAT similar to Sweatcoin is by movement, verified by a Movement Validator. Movement validators are the entities that will verify the validity of movement and update the blockchain. At the start, SweatCo Ltd will be the sole validator. The fee is 0.5% instead of the 5% in case of Sweatcoin.

It will get harder and harder to mint SWEAT token as the years pass.

An inactivity fee is stated to be introduced that will be charged if your physical activity will consistently fall below a threshold value. Similarly, burn mechanisms should also be introduced to counter the inflationary pressures.

Let’s try to come up with a valuation using the previously calculated average price of one Sweatcoin and the token unlock schedule graph:

As per the graph at TGE there will be around 4 billion unlocked tokens, each priced at $0.013.

This might be a fair valuation for an internal currency like Sweatcoin. When you bring the currency into the cryptoverse, the valuation game changes drastically.

The Sweat Economy team has also provided data wrt the monthly value of goods and services exchanged on their marketplace (can be equated to Gross Merchandise Value):

Using the same ratio, the circulating market cap for Sweat token will be $956.4 million.

Close to a billion dollar market cap would be a bit too rich in a bear market. There has been a 73% decline in market cap for Axie Infinity since the end of Q1 2022.

SWEAT has a major competitor in the G2E space i.e Stepn . Stepn’s GMT token was valued at 1.54 billion dollars. It’s down by almost 50% since then.

There are several factors that may increase or decrease valuation:

I recently discovered a Twitter thread on tokenomics. You should definitely check it out.

2. Value Accrual (What’s the benefit of HODLing the token?)

Marketing is about how well you leverage various social media platforms to reach out to your existing and potential customers. In the cryptoverse, Twitter and Discord are huge.

Here are their social media stats:

The stats are not too bad for a crypto project that hasn’t launched yet. Frequent marketing campaigns like giveaways, keeping the members engaged through various challenges etc. are very essential.

I came across a slightly misleading marketing ploy, though.

These 4 billion Sweatcoins don’t reduce the circulating supply because people who aren’t active for the last 12 months wouldn’t have opted in for SWEAT token.

Accessible founders are an instant hit among the crypto peeps in the form of regular AMAs on Twitter and Discord. The team has been conducting AMAs regularly.

For more information on the Sweat token, refer to the litepaper.

The competitive advantage that Sweatcoin has over Stepn is that Sweatcoin has no entry barrier. Owning or renting a NFT to start earning is just too much hassle. A dApp to become mainstream has to be perceived not as a web3 project but as a project that happens to utilize web3 technology.

The Sweat Economy has a very ambitious roadmap. Hopefully, they will be able to deliver on it.