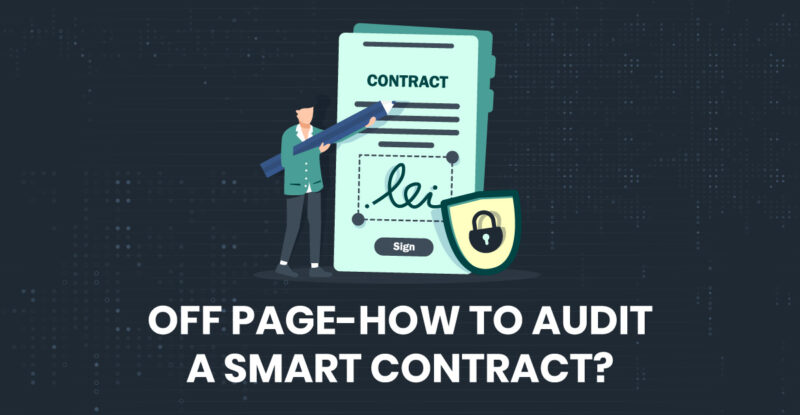 Despite being associated with one of the most secure technologies of the time, smart contracts introduce their vulnerabilities, making them prone to hacking.

It is critical to pay attention to the security aspects of smart contracts in order to prevent their exploitation, and smart contract auditing is the first step.

What is a Smart Contract Audit?

A smart contract audit is an in-depth examination of the project’s code to detect vulnerabilities and determine whether it behaves as expected.

Auditing is usually outsourced to a third party, which provides a second opinion on the code’s functionality while minimizing associated security risks.

Additional Read: What is a Smart Contract Security Audit ( The Ultimate Guide)

How to Audit Smart Contracts?

A smart contract audit’s underlying methodology is fairly standard among audit providers. It can be broadly categorized into data collection, verification process, and reporting.

The steps involved in the smart contract audit process are as follows.

Initiating with test running unit test cases written by the developers, checking for the appropriate performance of the code’s functionality. The next step here is manual verification of code by auditors. Auditors examine the code line-by-line, looking for standard vulnerabilities and then determining whether the code behaves as intended.

Security professionals here deploy auditing tools like echidna, slither, mythx, Mythril, scribble, and others to speed up the scanning process. Also, it ensures that no part of the code gets unnoticed and prevents human errors.

All this is complemented with smart contract fuzzing, where random inputs are given to check for unexpected behaviours. Thereby optimizing the code for functionality.

An initial report is compiled after completion of the auditing process once. It contains proof-of-concept, fuzz test results, vulnerabilities classified based on severity level, and auditor’s recommendations.

Project developers are expected to alter the code per the auditor’s recommendations. Although developers can bypass low severity issues, medium and high issues must be taken into account.

Post code refactoring, auditors undertake reverification of the code utilizing the same process. Lastly, a final report containing all the resolved and unresolved issues is compiled. In fact, few auditing firms score the project based on its security level. The project’s score aids in building trust in the blockchain project and makes it easy to raise funds.

With the rising popularity of the smart contract, auditing has become an integral part of its secure deployment process. Here are some of the pros and cons of auditing a smart contract.

With large sums of money being transacted or locked in smart contracts, they become potential targets for malevolent security breaches.

Therefore, it is essential to come across the security loopholes of smart contracts, and a security audit does exactly that. They not only check code for vulnerability but enhance its performance capacity.