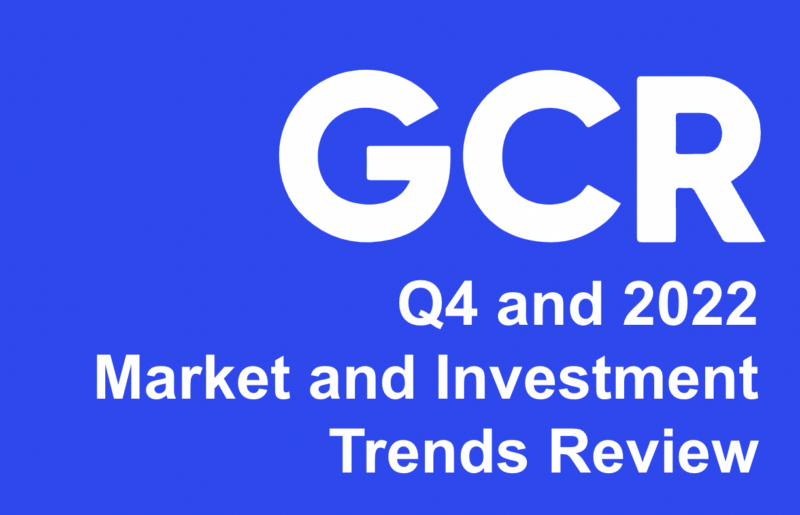 This piece lays out some highlights from the past quarter, as well as 2022 as a whole:

Since this new initiative’s inception in March 2022, we have experienced unrivaled success:

Every quarter, we share our progress on this front to highlight the effectiveness of GCR’s community-led investment platform. This underscores GCR’s full flywheel effect: strong community engagement to further add value to the projects with whom we partner. If you would like to learn more about how you can be involved with the GCR community, join our Discord.

Exacerbated by the demise of FTX and unfavorable macro conditions, crypto was in the negative spotlight during Q4 2022 as liquidity flooded out of the market. Fortunately, none of our portfolio companies were directly affected by the FTX implosion and instead have been making significant strides in their roadmaps. While the collapse of FTX, BlockFi and other CeFi companies may have impeded the industry’s growth for the next few years, these events underscore the need for trustless and transparent systems.

Despite the billions of dollars in dry powder for Web3 investments, VC funding for Web3 has significantly plummeted in Q4 as non-Web3 native investors fled away from the industry. Early stage projects faced more difficulties in raising capital as investors became increasingly conservative and risk averse as they assess investment opportunities. Hence, we have seen later-stage projects with some traction and clear roadmaps garner more interest from investors, which led to competitive rounds with higher valuations. Later-stage projects will be well capitalized due to the large amount of dry powder, but we don’t see many asymmetric return opportunities in the later stage projects due to competition.

At GCR, we remain committed to Web3 and are focused on Pre-Seed and Seed Stage projects that will bring clear innovation to the Web3 ecosystem. Web3 is still a nascent industry with a lot of near-term catalysts to make it more mainstream and we believe Pre-Seed and Seed projects are the most attractive investment opportunities.

Below is an overview of GCR’s investments during Q4 2022:

Similar to our previous quarterly letters, the dominance of Infrastructure and Tooling projects returned as a pivotal theme in Q4. With Web3 enabling novel revenue streams for entrepreneurs, more top Web2 talent will migrate away from Web2 to build in Web3. The same caliber of infrastructure and tools that exists in Web2 is needed in Web3 to reduce the friction for onboarding. Instead of betting on domain-specific applications, our thesis is to underpin the core protocols and tools that empower developers to build powerful applications.

Compared to Web2, building an exceptional project in Web3 requires more resources due to additional skill sets involved in development. For example, this problem is evident in game development, which is already time and resource-intensive in Web2. Game developers would rather dedicate their resources to creating fun and well-designed games instead of focusing on the integration of user-friendly wallets, NFTs, token economies and other Web3 components with their games. Web3 infrastructure and tools should eliminate the complexities of Web3 development and enable developers to focus on their areas of expertise.

Although the infrastructure segment is very saturated at the moment, we believe projects with strong technological capabilities and business development plans will ultimately win. Hence, we prioritize our due diligence process based on the competence of a project’s tech talent, business development efforts and growth strategies. With this, we are excited to back the strong teams at Common, IntellaX and Scroll.

2022 was a tough year for the crypto industry broadly and the fourth quarter was no different. The sharp pullback was catalyzed by the collapse of FTX. BTC made new lows, while ETH managed to stay above its June lows after the prior market blowup related to 3AC. That said, in context relative to equities, BTC and ETH performance has not been that surprising nor divergent when taking the view that they are investments in early-stage companies. Performance this year has roughly mirrored that of the ARK Innovation ETF (ARKK), a basket of early-stage technology equities.

The pace of deployment continued to slow, in particular after the collapse of FTX in November. In particular, there has been nearly no growth-stage deal activity in months as many of the larger allocators, including generalists, sovereign wealth funds and pensions, retrench after suffering flesh wounds from FTX in which many were invested. Overall, the investment pace is still ~3-4x higher than during the last bear market though, reflecting industry growth over a longer timeframe. Similarly, valuation expectations are coming down, although the number of datapoints has decreased as well making it hard to come to a general conclusion.

The dominant story of 2022 was the historically aggressive pace of rate increases enacted by the US Federal Reserve and similar actions globally in order to combat inflation, reversing a decade of declining rates. In 2023, the major story will be what the impact of higher rates will be on the economy as the lagged impact of tighter liquidity and credit conditions flow through. Eventually, the page will turn to when inflation normalizes, monetary conditions loosen and rates begin to decline again, or the “Fed Pivot”. Whether this is because the Fed, in its war against inflation, successfully engineers a soft landing or because the economic hardship from tighter monetary conditions becomes too tough to bear is yet to be seen. As is always true in investing, two reasonable people presented with the same facts can rationalize different conclusions

This remains a macro-driven market, and this is evidenced by the amount of focus and attention being paid to inflation. The market has gone from not caring much about CPI a year ago (given its decades-long trend in the +2% annualized range) to a focus on increasingly, absurdly granular metrics going from CPI to core CPI to services CPI and now to what some are calling “Supercore CPI”. No doubt tightening monetary conditions will continue to stress the economy, in particular, uneconomic highly levered entities, but the rate of change is no longer worsening.

In the digital assets industry, this past year was historically bad. It was hit by everything and the kitchen sink, including bankruptcies, abandoned projects, record-breaking hacks, and shocking levels of fraud (e.g. FTX). As the industry has grown, it is unsurprising that the damage in the wake of its collapse has surpassed prior crypto cycles. The industry is now more shaken than ever – emboldened naysayers are out in force as unease quiets even the longest-tenured in the industry. At year-end, the situation certainly appeared dire.

But as they say, sunlight is the best disinfectant. Bear markets are healthy – narratives are tested, hard questions are asked, and the wheat gets separated from the chaff. This cleaning of the house sets up the industry with a stronger foundation on which to grow going forward. As investors, it is incumbent upon us to look through the near-term stress, including the macro-overhang, and imagine what the world looks like on the other side.

To put valuations in a longer timeframe historical context, at year-end BTC and ETH were trading at the same price as five years ago. At the same time, the industry has made meaningful advancements in both technology improvements and adoption since then:

What is particularly striking is that despite the negative backdrop, the momentum of adoption by large financial institutions and consumer brands only continues to build. In our view, this is the single most important thing to track, because the biggest upside to industry growth will come from large non-crypto native companies entering this space and bringing with them their existing multi-million user base. This past quarter:

We continue to be excited about what lies ahead in 2023 for GCR and the rest of the crypto community.

If you are a startup raising capital and are interested in learning more about what it is like to have the support of a community with 7,500+ members, please reach out to one of our GCR Core Team Deal Leads!

If you are a Web3 enthusiast and are interested in learning about new crypto projects, investing alongside sophisticated members, and sharing investment opportunities, hop into our Discord and join the conversation!

As part of our effort to onboard the next one billion users to crypto, we are giving away complimentary 6-month Gold memberships to people who are aligned with GCR’s core values and are seriously interested in investing with us. If you are interested, please fill out this form here.

Please reach out if you have any questions, comments or feedback! We welcome the dialogue.