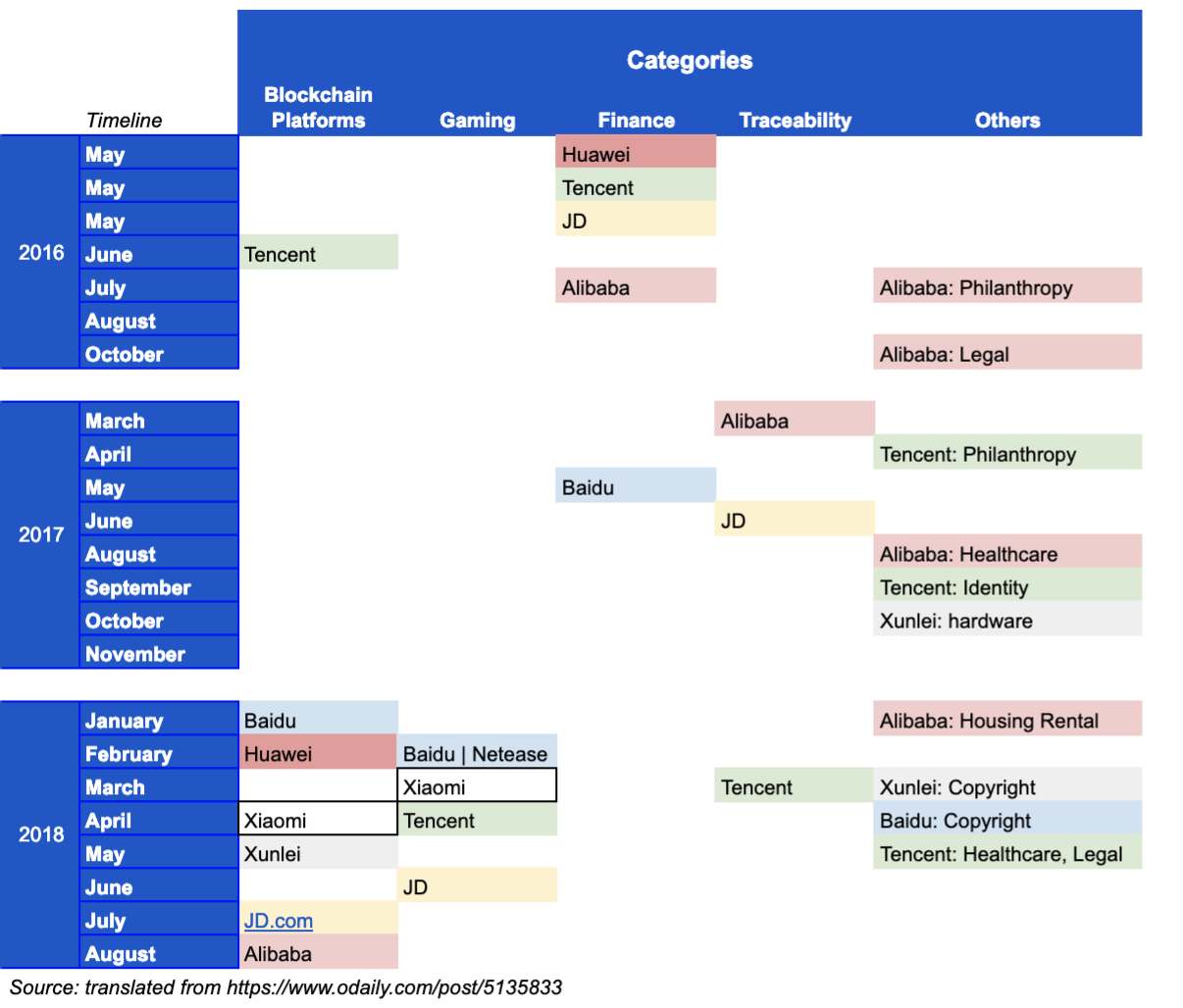 When we first started GlobalCoinResearch.com, one of the most widely read piece was our post on China’s True Crypto Giants- Tencent, Baidu, Alibaba JD. In the post, we highlighted that given the rising importance of these large tech conglomerates in China, and the increasing reliance on them by the Chinese government for monitoring and tracking citizens’ online footprints, large crypto innovations will likely be fostered by these large companies. To understand more about how China’s political and economic dynamics work from a macro point of view, be sure to our book recommendations for a thorough understanding.

In light of the increasing corporate involvements in blockchain in the media such as Facebook, Square, while also seeing that Twitter and Apple are exploring blockchain use cases, we decided to revisit the blockchain innovations from the tech conglomerates in China.

While Facebook may have 50 people working on , ts China social media counterpart, Tencent, has hundreds. Companies like Tencent and Alibaba have been involved with testing and permissionless blockchain technology since 2016, and how they’ve fared since starting is potentially telling of what the US large conglomerates may evolve into.

Below is a timeline highlighting the largest tech conglomerates in China that are involved in . We have created the most comprehensive timeline of these corporates’ involvement in blockchain that you can find in English.

We’ve also translated a chart from for a quic visual understanding of the blockchain application trends in the last year (see above). It’s interesting to see how conglomerates have shifted their blockchain focus overtime.

In 2016, many of the conglomerates were focusing on using blockchain to transform traditional finance, and overtime in the last year, the focus seems to be shifted to experimenting with gaming, building protocols, with some scattered focus around copyrights, and data preservation in the legal and health care industry.

Over the last number of years, we’ve monitored these large conglomerates and their blockchain developments. Quietly, these companies are building the forefront of China’s permission and permissionless blockchains in industries such as finance, gaming, supply chain, etc, and that could potentially extend to beyond China and spill into the rest of Asia and beyond.

Note: all the links highlighted below traces back to announcement sources and are mostly if not all in Chinese

2016.10 Ali cooperates with Microsoft, and Fa Da Da in an alliance to develop a “legal chain”, for recording evidence and preserving data on the blockchain.

2017.03 Alibaba collaborates with the Australian Post, health company Blackmores and PricewaterhouseCoopers to trace the origins of food using blockchain technology.

2017.03 Based on the public welfare project launched in July 2016, Alipay’s Love Donation Platform introduces its blockchain technology and es all the donation data on the chain.

2017.10 Ant Financial discloses its “BASIC” strategy, with which corresponds to the blockchain, A for AI?S for Security, I for IoT and C for Cloud Computing.

2018.08 Alibaba Cloud introduces Blockchain as a Service (BaaS), which supports a one-click deployment of blockchain environment to realize blockchain application across enterprises. It will be used for supply chain traceability and supply chain finance, data asset transactions, digital content copyright protection other fields.

2019.09 Bayer Crop Science has agreed to work with Ant Financial, the payments affiliate of Alibaba, to develop a blockchain-based system for agricultural product monitoring.

Quick bio: Founded in 1998, Tencent is a Chinese multinational investment holding conglomerate, whose subsidiaries in various Internet-related services and products, entertainment, artificial intelligence technology both in China and globally. Notable and relevant blockchain related divisions include Wechat and Wechat Pay.

2017.06 Tencent collaborates with Industrial and Commercial Bank of China on the Micro-Gold platform.

2017.08   Tencent announces its own blockchain platform TrustSQL, which aims provide all the tools necessary for developing Blockchain applications for businesses.

2017.09 Tencent and Intel announces to cooperat on blockchain identity certification.

2018.03   Tencent signs a strategic cooperation agreement with the China Federation of Logistics and Purchasing.

2018.04 Tencent blockchain releases the first blockchain game “Catching Demons” (some of the features of the game are still being tested).

2018.05   At the 2018 China “Internet +” Digital Economy Summit, Tencent says that it is using blockchain technology to work with hospitals to create prescriptions and is considering promoting this technology externally.

2020.04 Tencent, Huawei, and Baidu are among the companies that will comprise a new committee tasked with setting up national standards for blockchain and distributed ledger technology

Quick Bio: Incorporated in 2000, Baidu has the 2nd largest search engine in the world, and holds a 77% market share in China’s search engine market.

2017.05 Baidu Finance along with Huaneng Trust and other partners jointly issues an asset-backed securit on a blockchain. This ABS has been approved by the Shanghai Stock Exchange, with a total issued size of 400 million yuan.

2017.10   Baidu Finance officially joins the Hyperledger open source project and becomes a member of the board.

2018.05   Baidu Encyclopedia has been transferred onto the blockchain, and each edit on the Encyclopedia is confirmed through timestamps and hash algorithm.

2020.01 Baidu launched on Monday a blockchain-based service for developers and small and medium-sized businesses to build decentralized applications, or dapps.

Quick bio: JD.com is a Chinese e-commerce company, and the world’s leading company in high tech and AI delivery through drones, autonomous technology  robots, and possesses the largest drone delivery system, infrastructure and capability in the world.

2018.05 JD releases blockchain mini app “Hash Manor”, but has since taken it offline.

2017.06 JD establishes an alliance with involved parties participating in the upgrade of its ABS cloud platform.

2018.06 JD Cloud and Huobi China strategic cooperation on the research and development of the blockchain technology and application.

2019.04 JD.com has announced the opening of JD Chain to businesses, providing them with access to a state-of-the-art underlying blockchain framework.

2019.05 JD.com has reportedly applied for over 200 blockchain patents.

2018.04 Xunlei Chain officially launches,CEO Chen Lei said that copyright protection will be the first of its application

2018.04 Xiaomi launches the Xiaomi WiFi chain, a small gaming application based on .

2018.07   Xiaomi introduces “rice grain” as cryptocurrency on blockchain to reward Xiaomi users. The “rice grain” can be used for consumption and exchange. Users can log in daily, share its WiFi network, connect to new IoT (Internet of Things) devices, experience Xiaomi products, invite friends. to get “rice”.